Review of Bob in Beijing

Review of Bob in Beijing

Here's a great essay by Ulyssestone from ER:

folk label by then - I said that musically I had two regrets: “I have never seen Bob Dylan, and never met anyone that love him more than I do.”

Three years later, Dylan toured China for the first time, April 6th in Beijing at the Workers’ Gymnasium and 8th in Shanghai at the Grand Stage. I went to both gigs, saw the Bob and met lots of good people who were radiating Bobby lovingness like burning coal. Now my heart is full of joy and thankfulness, to Bob and who were there for him.

I have a theory that, after 200 years, most pop music from the past century will be forgotten, just like 99% of the composers on this list, casual baroque fans have probably never heard of them. In my opinion only The Beatles, and Dylan will go down in history as the Handel and Bach of our age. Why? Just like Bach, Dylan perfected a style that had been deemed “outdated” in his time, and single-handed took the style to an artistic level never reached before. That’s the sheer power of genius.

If there’s not Elvis, someone would almost certainly “invent” rock, but such things cannot be said to Bach or Dylan. Geniuses don’t have to influence the time they happen to inhabit. Handel and The Beatles enjoyed the grandest success during their career, and rightfully so. On the other hand, Bach published little of his works during his lifetime, and Dylan, though being honored by Time as one of the100 Most Influential People of the 20th Century, remains the most misunderstood figure in pop history. Numerous people cited him as major influence, but he has no real peers or inheritors. Mojo once published a list of 100 Greatest Dylan Songs, and the 100th is Oh, Sister. Andrew Bird covered this song a lot during his tour. I regard Bird as one of the finest singer-songwriters of today, but honestly I don’t think he ever wrote a song in the same league of the 100th greatest Dylan song.

I listened to him relatively little in the past two years prior to the news that he’s coming, stopped following the bootlegs after the 2009 European tour and had not revisited the albums often. Not because I lost any interest in him, on the contrary, my eager to know him better was ever growing. I was just waiting for me, and working my way out, to be better prepared for his music. When I first heard “Love & Theft” I thought it’s odd fish’s drool, five or six years later it became my all time favorite album. It’s not because the songs had grown on me, it’s me that had grown and matured, become old enough to appreciate the wisdom of old. In 2009 I felt that I had more work to do before I can dig him more, so I stopped.

For the last couple of weeks I listened to him intensely again, and I kept on thinking that, I would surely cry when I saw him doing these songs live. The air was getting more intense as the Beijing gig was drawing near. In the afternoon of the performance day, I was as anxious as if I was going to see Mozart improvising his c minor fantasy before he wrote it down. On the long bus ride to the venue, I looked out of the window and still couldn’t believe that he’s in this city. The time finally came. As the lights went out, and the voice intro started, we stormed to the rail with a friend in her wheelchair, another friend waved back to other people in the stalls, and they responded enthusiastically. Securities tried to push us back but they didn’t dare to touch the wheelchair. After some go-arounds, Bob’s men came and asked the securities to let us be. We stayed at the rail for the whole gig.

The lights went on again and he was there. He opened with Gonna Change My Way of Thinking, the second ever performance of this gem outside the US. With the totally re-written lyrics, this song could easily be on "Love & Theft". He must get a kick out of singing“we live by the Golden Rule/whoever got the gold, rules”in China of all places, and I couldn’t take my eyes off him. All my anxieties were gone the second I saw him immersed in his music, and smiled on stage. From that moment on I knew that I didn’t need anything for myself. He was happy, and I? What good am I to ask for more? I was more than happy. It felt so good to realize that besides my wife and relatives, I am also able to love another person with all my heart. It felt so good to be in the rare moment that love and music was one.

It’s All Over Now, Baby Blue followed next, a decidedly upbeat version that sounded like a cheerful invite to a last dance. Love is pleasing, love is teasing - he is always the master of flipping the two sides – and I know what he always meant: love is not an evil thing.

Beyond Here Lies Nothin’ came as a surprise, and it relieved me that he’s not going to do Jolene tonight. He delivered a decent Tangled Up In Blue, though I still couldn’t understand why he continued to cut off a lot verses (he didn’t miss a line in Rollin’ And Tumblin’ and The Levee’s Gonna Break!). Charlie finally started to actually play the guitar in Honest With Me and the new arrangement rocked hard. Simple Twist Of Fate is the same as last year, with the third person narrator switched to “her”. Watching him performing the Blood On The Tracks songs at this stage of his life transcended affection and anger, it reminded me of his comment on Hank Williams:

The first highlight is A Hard Rain’s A-Gonna Fall, and the crowd went wild after the first verse. His delivery was clear and powerful, and charged with playful accent variations. Those apocalyptic images were pouring like a flood, and when he sang “I’ll know my song well before I start singin’”, he sounded as determined as a prophet should be. Only this time, he is determined that even the Book won’t be fulfilled, the power of songs lives on.

The second day I took the overnight train to Shanghai, and got to the Grand Stage at the middle of the performance day. I hung around at the staff entry, talked to a roadie when he came out for a cigarette, asked him had he enjoyed his stay in China, he said it’s all good except for the air. “How does Bob feel?” “Well, you know, he doesn’t actually talk to us.” Around 4:30pm the van came and I saw him in his hoodie and I shouted “You are younger than that now!” He disappeared into the venue in a split second. A French fan later asked me if he’s wearing jogging shoes “so he walked that fast.”

I haven’t get my mind wrapped around the fact that the Shanghai gig is over, compare to the big bang of the Beijing gig, it slipped through my senses like the presto finale of Chopin’s b-flat minor sonata, after the grand funeral march. Even the ominous opening chords of Blind Willie McTell sounded like thunderclaps in a daydream as I’m trying to recall now. I almost cried in Don’t Think Twice(It’s All Right), but soon I felt glad that he didn’t seal this song forever after Suze passed away. In Thunder On The Mountain he sang the stanza that contains “I’ll say this I don’t give a damn about your dreams” twice in a roll. That’s what I’d love to hear from “voice of a generation”. All those boring journalists that suspected he didn’t speak out for Ai Weiwei because of the pressure from the Chinese government, you mistook him for Bono. He has an answer for you, and it's not Ai Shall Be Released:

“If you got something to say, speak now or hold your peace
If it's information you want, you can get it from the police.”

He closed with a less sincere Forever Young, deliberately sang it with pitch-changes that butchered the song. But it’s still a thrill to hear the man himself addressing the Chinese audience in this turbulent era:

“May you have a strong foundation, when the winds of change shift.”

I didn’t take any photos during the shows, somehow it felt too sacred to persevere the images of him with anything other than memory.

May his songs always be sung.

Check out Ulyssestone's fascinating blog. This guy knows a lot about music. I'm not sure of his profession, but I think he's a music critic in China. His English is better than most native English speakers.

I'm not sure what the middle word means. The card is saying "I sit down" or "I am rice" or something like that. 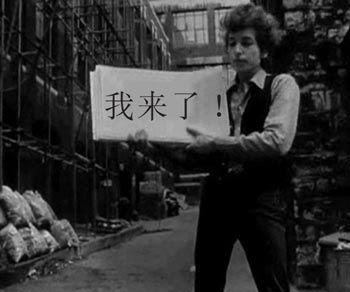 He had to submit the proposed set list to Government censors. Such songs as "Desolation Row", "Blowing In The Wind", "The Times They Are A Changing" and "Chimes Of Freedom " were not to be included.