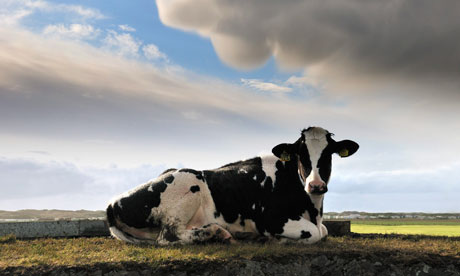 Dairy cows are not, on the whole, spherical. Photograph: John Mason/SWNS.COM

Did you hear about the farmer who hired some mathematicians to help him increase his milk yield? Their report began: "Consider a spherical cow . . . "

Mathematics of Life: Unlocking the Secrets of Existence by Ian Stewart

Tell us what you think: Star-rate and review this book This is a famous old joke about the disconnect between mathematics, the language of clear abstractions, and the life sciences, the domain of messy organic forms. For much of the history of science, biology and maths have barely been on speaking terms. When I was at school, biology was the science you took precisely to avoid calculations and formulae. Maths was firmly in bed with physics, its muse.

Ian Stewart says this is changing. He claims that for the next century the driving force behind mathematics will be biology, and that this marks a fundamental, and exciting, shift in how the sciences inter-relate. "Mathematicians like nothing better than a rich source of new questions," he writes. "Biologists, rightly, will be impressed only by the answers."

Stewart is Britain's most brilliant and prolific populariser of mathematics, the author of at least 30 books, as well as academic texts and influential research papers. His recent collections of playful miscellany, Professor Stewart's Cabinet of Mathematical Curiosities and Hoard of Mathematical Treasures, have been bestsellers. Mathematics of Life is a much more serious book. Through mathematical eyes, Stewart chronicles the major advances of biology, from the invention of the microscope three centuries ago to the discovery in 1953 by Crick and Watson of the structure of DNA. He shows just what maths has done to explain elements of life, and where research is taking us next.

One reason why biology is now attracting mathematicians is because much of the subject has been reduced to physics and chemistry. Neurons can be understood in terms of networks, nerves as cables transmitting electricity and DNA as strings of different chemicals. A variety of mathematical fields are applicable to biology. Knot theory is used in the analysis of tangled strands of DNA. Abstract geometry in four, five or more dimensions can tell us a lot of useful things about real viruses in three dimensions. The computer pioneer Alan Turing's "reaction-diffusion" equations help us understand markings on animals such as stripes and dapples. Stewart mentions his own work on types of animal gait based on a simple circuit in the nervous system called a central pattern generator. Neuroscience is particularly maths-friendly: for example, equations can explain why you see spirals when you take hallucinogenic drugs. (It's because of the arrangement of neurons on the visual cortex.)

If mathematicians are learning to love biology, then biologists need to take on board the peculiarities of mathematics. Stewart returns to the joke in the opening paragraph, which he says is not really a joke at all. Spherical cows may indeed be useless for determining milk yields, but they might be a useful approximation for other problems, such as the spread of bovine skin disease.

Mathematics of Life is dense with information, written with Stewart's characteristic lightness of touch and will please the dedicated maths reader. I would like to think it will also appeal to the wider audience of Curiosities and Hoard but I fear they may struggle with the volume of conceptual ideas and the many scientific terms. This would be a shame since the book is a testament to the versatility of maths and how it is shaping our understanding of the world.

Alex Bellos's Alex's Adventures in Numberland is published by Bloomsbury.