I hope this guy is OK but it doesn't look good.

He must be a really adventures person because now of days going to the local Walmart a 10 mile drive 'to town', is about all the excitement I can handle. Going to Indonesia in itself is really something for a American.

JAKARTA, Indonesia - A helicopter, fishing boats and divers scoured waters off western Indonesia on Monday in search of an American surfer who disappeared after coming off a powerful 10-foot (3-meter) wave. Daniel Bobis, 32, a math teacher and coach at Long Beach High School in New York, apparently hit another surfer's board on Sunday morning after emerging from the barrel of the wave. His wife, Rachel, said his board washed ashore soon after. She initially thought he would pop up down the coast and make his way back to their holiday bungalow.

But by Monday afternoon, she'd all but given up hope of finding him alive. "Everyone is telling me a lot of people go missing here ... that within 48 hours his body will float up and wash in," said the 29-year-old. "That's the only thing we can be hopeful of." On Monday, a helicopter joined a fleet of fishing boats and a local search-and-rescue team scouring waters and the coast, said Andri, a rescuer on the scene. Dozens of surfers, divers and snorkelers also have joined in.

Bobis' father and stepmother were on their way to Indonesia and friends in Long Beach held a candlelight vigil Sunday evening in the beachside community where he grew up. "Surfing was like his religion," said Maurice Mitchell, who played in the same band as Bobis and was best man at his 2008 wedding. "He said it was one of the most addictive experiences in life and if anybody tried to surf they'd be as hooked as he was."

Re: American surfer missing in waters off Indonesia

i hope they find him also,

or at the very least....he died doing what he enjoyed. 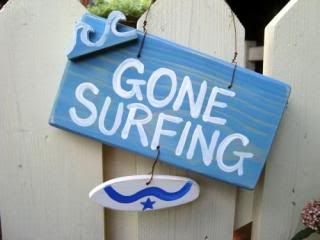