Slavery and the American Civil War

Slavery and the American Civil War

A survey of slavery, emancipation and human rights 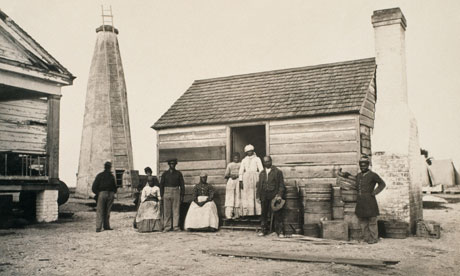 A group of slaves outside their quarters on a Georgia plantation. Photograph: Corbis

It is tempting to see Robin Blackburn's The American Crucible as the capstone of an influential career. As a founding editor of the New Left Review and Verso, leading activist in the London university protests of the late 1960s, and author of a number of important studies of New World slavery and global economics, Blackburn has long pondered many of the themes related to human freedom he explores here. But this new book, monumental though it is, shouldn't be read as a culmination but rather a catching of breath, and a continuation of arguments initially made by the great original theorists of the Atlantic World system, Eric Williams, CLR James, and WEB Du Bois, who, writing in the early 20th century, were among the first to stress the importance of slavery in the creation of western culture and society.

Because it tied together so many threads of human interaction – transportation, communication, warfare, labour, finance, trade, consumption, manufacturing, agriculture, inter-imperial rivalry, territorial expansion – slavery is the last institution that historians can still call a "system" without feeling like relics from the 1970s. Still, there are now few big books making the argument that slavery and its overthrow made the modern world.

The American Crucible – which covers half a millennia, all of the Americas, and a good deal of Europe and Africa – bucks this trend. Along with Williams, a descendent of both slaves and slave traders who was elected the first prime minister of Trinidad and Tobago, Blackburn stresses slavery's role in underwriting the west's industrial expansion. With James, also a descendent of slaves, Blackburn credits the importance of political struggle and ideas in rendering slavery morally indefensible. And with Du Bois, likewise also descended from Caribbean slaves, Blackburn explores the psychic and ideological construction of white supremacy following slavery's formal end.

The centrepiece of The American Crucible is Blackburn's measured reconstruction of the chronology of the Haitian revolution and its influence on freedom movements in the United States, Spanish America and Brazil, a persuasive rebuttal of scholarly assessments that the revolution was exceptionally bloody or that its leaders instituted a new form of anti-European racism. It wasn't and they didn't, certainly to no greater extent than that which occurred in other chapters in the age of revolution. But Blackburn does more than defend James's argument that Haitians universalised European ideals of liberty, fraternity and equality. He extends it across all of the Americas: "Momentous clashes over slavery," Blackburn writes, generated new notions of "human freedom and human unity" that would inform modern social democracy and human rights. The American Crucible likewise amasses substantial data to support Williams's famous but disputed thesis that slavery financed the industrial revolution. Beyond direct profit from the trade itself, embryonic British industrialism was nurtured, Blackburn writes, through a range of supplementary economic activity, including manufacturing exports to Africa, revenue generated by plantations, the import of cheap and abundant raw material from those plantations, and the extension of credit that financed slavery.

Blackburn, though, rejects the notion associated with Williams and other economic determinists that slavery ended only because it had become a drag on capitalist profits. Instead, leavened by James and Du Bois, as well as by more recent scholarship, he describes emancipation in all its vexed, indeterminate grandeur, propelled by violent clashes, public debate, harrowing exposés, and the consolidation of new notions of freedom and equality.

Karl Marx himself was keenly aware that capitalism could easily support, even thrive on, chattel slavery and other forms of human bondage – a point Blackburn underscores in his other new book, An Unfinished Revolution: Karl Marx and Abraham Lincoln (Verso, £12.99).

Marx's analysis of the causes of the civil war holds up well compared to the smug liberal London opinion of his day, whose organs, such as the Economist, were certain that the conflict was really about tariffs. Marx knew, well before hostilities broke out, that the crisis was about slavery.

The "dirty dogs of the Confederacy" were inherently expansionist, he thought, and would spread not just west but into Mexico and the Caribbean if unchecked. The north, for its part, "wages war" in a way expected of "a bourgeois republic, where fraud has so long reigned supreme", its fractiousness contained only by the resolve of the "singled-minded son of the working class," as Marx described Lincoln. Far from advocating white-skin socialism, Marx in his copious writings on the American civil war and its aftermath – the most important of which are reproduced here, along with those of Lincoln and others – demonstrates universalism: the "rescue of an enchained race", Marx wrote to Lincoln, would lead to the "reconstruction of a social world".

Actual reconstruction, carried out half heartedly by Lincoln's successors, was something else entirely. Slaves were unchained, the union saved, but, as Blackburn points out, no unified central government emerged that could check the repression launched against the executors of emancipation's full potential: free blacks in the south, agrarian radicals in the west, and a militant working class in the north. In other words, the prerequisite for a mass-based labour party – a strong state that could regulate capital and contain the violence of its night riders and company goons – didn't exist, leading militants, including many German-Americans allied with Marx's International, to forsake electoral politics and pursue pure syndicalism.

What would have happened, Blackburn asks, had Marx – who in Europe supported both union and party building – relocated to New York or Chicago? His answer is necessarily wistful: just as Marx "saw the importance of slavery at the start of the civil war, so he would surely have focused on 'winning the battle of democracy'" by urging his comrades towards a more flexible, potentially successful strategy to secure both political liberty and social equality, which Blackburn, like Marx, understands to be indivisible.

An Unfinished Revolution is an apt coda to The American Crucible – the latter a probing exploration of the moral world slavery and its abolition created, the former a meditation on a world that could have been.

Above is a review of a new book about Slavery.

As leader of the Kings of Rhythm, a St. Louis-based road band that toured the South and Midwest throughout the late '40s and early '50s, Mr. Turner presided over the 1951 recording of "Rocket 88" by Jackie Brenston, a singer in his band, which is frequently cited as the first rock 'n' roll record.

Mr. Turner also recorded as a sideman on many key early R&B records, including the first recording sessions by bluesmen Howlin' Wolf and B.B. King, while working as talent scout for Memphis record producer Sam Phillips, later founder of Sun Records and the man who first recorded Elvis Presley.

I don't think he writted Bluebottle Blues though.

And that gramophone record thing up there ain't spinning proper. It won't play proper at that speed! I'm confused.

I likes the sound though.