Bumped as a reminder of the first post on this thread: a review of Iain Sinclair's "Ghost Milk", which I've now finished reading. 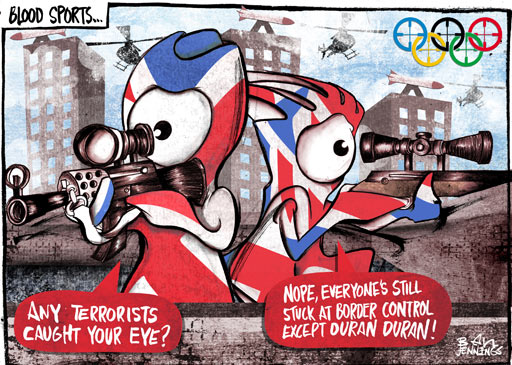 Ben Jennings on security at the Olympics

Missiles are to be installed on flats during the Games and snipers will patrol the skies.

I wonder whether my block of flats is one of those selected to have all this military hardware on the roof.

Duckweed on the Limehouse Cut canal near my place.

When I posted another photo on another thread (can't remember which) of the Limehouse Cut duckweed, Pinz suggested that this might be caused by an excess of nitrates in the water.

I've subsequently learned from Iain Sinclair's book on the Olympics project ("Ghost Milk"- see first post on this thread) that the Olympics Park in Stratford was constructed on the site of many so-called "dirty industries", including the maufacture of fertilisers- which appear to have leeched into the water table of the surrounding area, if the photo above is any guide. So Pinz was correct.

The same Olympics Park site was once the home of a factory manufacturing watches with luminous (i.e. radioactive) dials. In the course of construction, dust containing high levels of radioactive Thorium has been blowing freely onto surrounding residential areas. Great.

Promoted as "The Greenest Olympics ever", it's also worth noting the bulldozing of local residents' allotments to make way for the Olympics Park and the air miles involved in printing the tickets for the games ABROAD.

At least part of Iain Sinclair's venom appears to be justified.