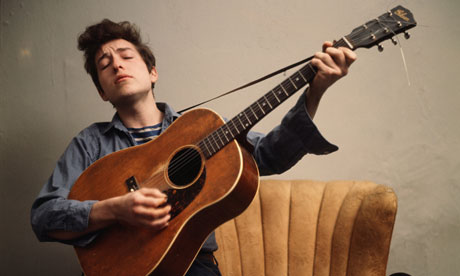 "What is this shit?" opened Greil Marcus's Rolling Stone review of Bob Dylan's 1970 double album Self Portrait. According to Dylan, the depths of whose perversity can seem, on occasion, nigh on unfathomable, he decided to put together this eccentric melange of covers and odds and ends, including the worst numbers from his Isle of Wight concert of the previous summer, as a means of escaping the straitjacket of his fans' expectations. "We released that album to get people off my back," he later explained in an interview, "so people at that time would just stop buying my records, and they did."

Dylan was approaching 30 when Self Portrait appeared. Despite the country-pie persona he had assumed on the album's predecessor, Nashville Skyline, and despite his extended sabbatical from touring and his retreat from the public sphere after his motorbike accident in 1966, Dylan was still routinely being hailed as the "spokesman of his generation", as the "expression of the disturbed and concerned conscience of young America", to quote from the address delivered at Princeton when the university conferred on him an honorary doctorate in the summer of that year. Dylan, however, simply wanted out. "What did I owe the rest of the world?" he asks, recalling this period in his memoir, Chronicles: "Nothing. Not a damned thing."

Its trenchant opening notwithstanding, Marcus's review of Self Portrait was in fact exhaustive, finely nuanced, and not entirely negative. He interprets the record as a weird sort of concept album, one gleaned from the cutting-room floor and artfully constructed as a "cover up, not as a revelation". Certain songs, such as "Living the Blues" and "Copper Kettle", get an unambiguous thumbs up, while others, such as Dylan's parodic version of Paul Simon's "The Boxer" (thought by some to be about Dylan), get smartly dismissed: "Jesus is it awful."

That's a phrase that must have coursed through the mind of even the most ardent of Dylan fans on more than one occasion over the four decades that have passed since Self Portrait. Dylan is now approaching his 70th birthday, and the uneven, often baffling trajectory of his career, with all its astonishing peaks and dispiriting troughs, is at last developing a degree of clarity. For every great "comeback" album such as Blood on the Tracks or Infidels there has been a Down in the Groove or a Christmas in the Heart, for every sublime reconnection with his genius, a shambolic shuffle down a blind alley.

In recent years both trade and academic presses have been rolling out book after book on the man who transformed popular music for ever. That transformation took place primarily in the years 1965-66, when Dylan released his great trilogy of albums, Bringing It All Back Home, Highway 61 Revisited, and Blonde on Blonde, and embarked on a world tour with the Band that is often called the greatest rock'n'roll tour of all time. It reached its apotheosis in the famous concert on 17 May at Manchester Free Trade Hall, at which Dylan responded to a cry of "Judas" from a disaffected folkie with an instruction to the band to "play fucking loud", and an incendiary performance of "Like a Rolling Stone". Footage of this concert provides the climax to Martin Scorsese's superb documentary of Dylan's early career, No Direction Home, although we get to see only the first verse of the song: no doubt the rest is stored in the vaults awaiting some further lucrative release.

Marcus, who is four years Dylan's junior, was just old enough to see the pre-electric, folk-singing and "finger-pointin'" Dylan in action. This book opens with Marcus's memories of a scruffy young singer-songwriter appearing as a guest act at a Joan Baez concert held in a field in New Jersey in the summer of 1963. The 18-year-old Marcus was mesmerised by Dylan's stage persona, and he records the occasion as if it were a coup de foudre: "Something in his demeanour dared you to pin him down, to sum him up and write him off, and you couldn't do it." Spotting the singer, whose name he hadn't caught, fumbling to light a cigarette after the show, Marcus approached him and told him how much he'd enjoyed his set. "I was shit," Dylan replied, "I was just shit."

So began an on-again/off-again romance fully charted in this compendious collection of Marcus's occasional writings on his hero. The first piece is from 1968, three years after Marcus witnessed one of the legendary Dylan and Band concerts – "a show that without any question was the most powerful performance I've ever seen by anyone." This piece also describes a less powerful gig at which a Bob Dylan imitator performs a Dylanesque harmonica solo while hidden from the audience inside a trunk. Could it possibly, possibly be him, the audience wonders? About a year earlier Dylan had composed and sung in the course of The Basement Tapes sessions – about which Marcus wrote brilliantly in an earlier book on Dylan called Invisible Republic – the perfect response to all the unrequited longing that had built up during "three years of memories, of waiting, scares of the end and false starts toward another chance": "I'm not there."

As in Invisible Republic, Marcus often uses Dylan songs or performances as an entry into extended riffs on the history of American music. He also enjoys testing the power of early Dylan songs such as "With God on Our Side" to serve as responses to recent events, such as the invasion of Iraq.

Marcus has surprisingly little time, however, for the "Rolling Thunder" tour of 1975, and positively foams at the mouth when attempting to appraise Dylan's evangelical Christian phase (1979-82), although it was during this period Dylan produced some of his greatest concert performances, and wrote many wonderful songs. He savages Street Legal, dismisses Oh Mercy as "airless", and rather overrates, in my opinion, the patchwork quilt of quotations that is Love and Theft.

But then this volume is itself a kind of patchwork quilt, by turns poetic and contentious, at times testy as a spurned lover, but worth reading for the occasions when Dylan at last lives up to Marcus's notions of what Dylan should be, and the writing swoons and soars in its dizzying efforts to make us feel what Dylan's music is doing to him, and the "love minus zero / no limit" it can inspire.

Similar topics
» The Doors- Greil Marcus biography
» Greil Marcus: a life in writing
» The Zodiac/Bob Dylan
» What Dylan tune are you listening to now?
» The Bob Dylan Depreciation Thread