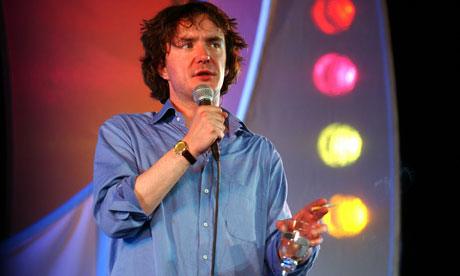 The set-up: Dylan Moran is supposed to be an ornate Irish shambles. Shane MacGowan, Peter O'Toole, Flann O'Brien: pissed and brilliant, defiant and unorthodox, you know the type. With his pallor and his messy hair, his slurred speech and his cigarette (lit here in proud defiance of Dublin's local ordinances), he is like a Celtic and comedic equivalent of Pete Doherty, whom at times he eerily resembles.

While the brilliance in this show is genuine, however, I'm not so sure about the pissedness. The white wine in his glass barely shrinks an inch in 88 minutes. He is also very obviously in charge of things, and has to be, given all the crafted phrases and ideas he plays with. Because Moran (pronounced MORE-un, by the way) is one the finest phrase-makers in comedy. There can be no arguing with the splendour of his comment on modern pop stars: "They're just things to occupy thongs." And he has a wild talent for flinging out ideas you want to stop and have a look at. "Everybody is corrupted by hotel rooms," is a good one.

Funny, how? Moran's break came early, when he was the youngest ever winner, at 24, of Edinburgh's Perrier award. Yet the values he stands up for – both as a comedian and as an actor – are fusty middle-aged ones. He is best known for his Channel 4 series Black Books, in which – despite not having finished with his 20s – he played a cantankerous bookshop owner called Bernard. (He also should be better known for How Do You Want Me?, an excellent but now forgotten sitcom about rural life, which he made with the late Charlotte Coleman and the satanic Peter Serafinowicz).

On stage, Moran talks little about his life, and refuses to do so at all in interviews. (How's this for suppressed hostility?) When Monster was recorded, however, we do know that he was married with children, and it is those experiences – more than any supposed carousing – that shape his act. "When was the last time you saw a child who wasn't in need?" he asks at one point, and gets a loud laugh of recognition from all the mums and dads.

In effect, what Moran performs is a conjuring trick, by managing to smuggle out the less bigoted frustrations of middle England beneath a cloak of rumpled Irish charm. "I have limited sympathy for people who get messed up by heroin," he says, for example, "because you would think by now they would have heard something bad about it." Or there is his complaint that "Rappers never say anything nice."

At times, this combination of cosiness and glamour, spiced with his absurd imagination, brings Moran's mannerisms rather close to Eddie Izzard's. Although often, in fact, Moran outdoes him. Who else would dream of observing that, to drink gin, "you have to be 45, female and sitting on the stairs"? Pissed or sober, I call that a dash of genius.

Steal this: "I'm not a fighter, I'm a bleeder. The best I could hope for would be to drown someone else in my own blood."

eddie...I borrowed the DVD of Monster from the library a month ago and about 3 hours ago I watched it for the third time since I borrowed it. I think it's brilliant.

I loved him in Black Books

I loved him in Black Books