When rock critic Dave Simpson's covers group split up before they'd even played a gig, it made him realise what being in a band can do to well-adjusted people 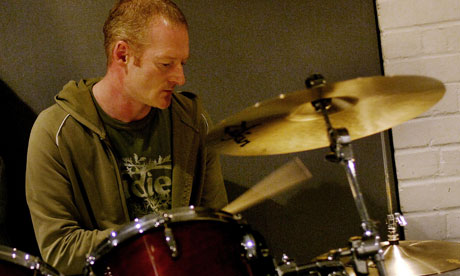 'Playing in bands can do strange things to the most well-adjusted ­people' … Dave Simpson tries to kick-start his rock career. Photograph: Sarah Lee for the Guardian

The bombshell arrived on a Monday morning. "Dear all," began the lead guitarist's email. "I'm afraid I've come to a decision to leave the band. I feel frustrated that we don't seem to be going anywhere." Five minutes later there was a missive from the singer. "Sorry to hear this, but I'm feeling the same."

This wasn't Mick and Keith finally calling time on the Rolling Stones, or Marr and Morrissey exiting the Smiths. It was the embarrassment of my covers band, the ReVamps, splitting up before we'd even played a gig. Our sad, if little-mourned, demise marked the end for our village's "other group" (the first being a Queen tribute band, whose Freddie Mercury was the postman).

As a rock critic-cum-occasional drummer, being in a band has been an education in life on the other side. You realise an ability to play is just part of it: the rest of it really is like This Is Spinal Tap, and the familiar cliches about why bands split up are mostly true.

I had wanted to play in a band long before I wrote about music. My first, in my teens, ended in a fist fight on a zebra crossing. The second (intense, arty Leeds types who had a mate-cum-roadie called Damien Hirst) replaced me with a drum machine. The clunkily named This Awkward Age got as far as supporting the Shamen, but where they went on to have a No 1 smash with Ebeneezer Goode, we played an emotional farewell to 25 people.

This time I was convinced it would be different, not least because we had no artistic ambitions. Our segue from Lady Gaga's You and I into the Beatles' Hey Jude was never going to fill Wembley, but it might get them going in the Collingham Half Moon. There could be no arguments over money, because there wasn't any. And how could we grapple over "musical differences" when we weren't writing our own songs?

Even so, the bickering started early. I thought our female-sung version of Snow Patrol's Chasing Cars was rather haunting. The others thought it was depressing. After labouring over the Calling's ghastly Wherever You Will Go, I was quietly relieved when the rhythm guitarist decided it sounded "like an ad for tampons".

Playing in bands can do strange things to the most well-adjusted people. The simple act of strapping on a guitar can turn just about anyone into a posing, would-be rock god. I soon remembered that bands have power blocs, ego problems and pecking orders. In the Stones, it's Mick and Keith who call the shots, and the others accept this because between them they have written some of the greatest rock songs ever. It's harder when your lead guitarist is convinced Sweet Child O' Mine is better without the tricky opening riff.

An argument developed over a vegetarian sausage. "I'm not having a go at you, Dave," it began. "It's vegetarians in general. They're a pain in the arse." It wasn't exactly the Troggs tapes, I admit – that infamous recording of rock in-fighting (drummer Ronnie Bond: "Whether you think so or not, that is a number-fucking-one, and if that bastard don't go, then I'll retire!"). Still, it sowed the seeds of frustration.

The end came quickly. Unlike the Eagles and New Order, we didn't end up communicating through lawyers, but we did ignore each other's emails. The guitarist told me that my (admittedly rubbish) military drumbeat to Annie Lennox's Little Bird "didn't fit". At our final rehearsal, my sigh of "Oh, we're not doing that, are we?" for Bad Company's Feel Like Making Love was met with a death glare.

I suspect our hapless trajectory mirrors that of countless groups. But from now on, I will review bands with a new respect. After all, they have produced a set of material, made it to a gig and tolerate each other well enough to stand on the same stage. As for my drumming career, I am following the time-honoured path of "pursuing other projects", and have joined a new band.

Still, this might not be the rock graveyard for the ReVamps. If we were to receive a considerable offer, I'm sure we could be persuaded to follow Black Sabbath, the Stone Roses and the rest and reform, citing – what else? – "unfinished business".

Re: The trials of life in a rock band

The infamous Troggs Tape, referenced above:

Similar topics
» No other rock band has ever sung better than this
» Viv Stanshall and the Bonzo Dog Doo Dah Band
» Who are all those people on the cover of Wings' Band on the Run album?
» The Rock Q & A
» Garage Rock