The Rock: how to woo the ladies with your man boobs

Dwayne Johnson on working with Michael Caine, and his trailblazing use of pecs in his new movie 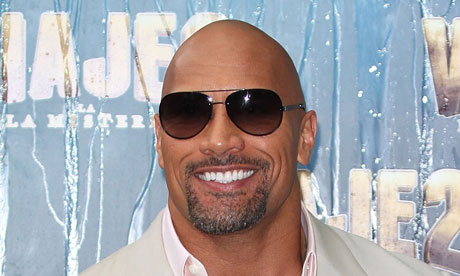 The Rock: what was he cooking? Photograph: Victor Chavez/WireImage


Who am I speaking to? The Rock or Dwayne Johnson? It's hard to keep up.


How would you describe Journey 2 Mysterious Island (2)?

The film is a lot of fun. It's visually stunning with some great special effects, some great action sequences, some great tension and adventure. Last, but certainly not least, I look great in 3D.


And how would The Rock describe it?

The Rock would describe the film in the same way that I just described it. But at the end, he'd say: "The Rock looks great in 3D."


What was it like working with Michael Caine (3)? You get into some good arguments in the first half.

We had an outstanding chemistry from the beginning. I have been such a big admirer of Sir Michael for years now. He is humble, he's gracious, he's a man's man, tells a great dirty joke. We had a great chemistry offscreen, and a great biting chemistry onscreen.


You sing in this film, too. At what point did you realise this was going to happen? Can you play the ukulele?

We needed a break in the third act because there's tension – the island's sinking and there's so much mayhem – we needed a good moment where the audience could just breathe. We came up with the campfire scene, and I thought: "Why don't I pull out the ukulele, sing What a Wonderful World to the others and change the second verse around so I take a few jabs at Michael and call him Yoda?".That's me playing the ukulele. I grew up in a musical family; the majority of my growing up was done in Hawaii. It's what we do. You sing, you dance, you play ukulele and you drink.


So you sang What a Wonderful World in the film and you recorded It Doesn't Matter with Wyclef (4). Should we expect an album soon?

Thanks. I'd be delighted.


As far as I can tell, this is the first movie where 3D has been used to show a berry pinging off a jiggly man boob into the audience. What's it like to be a history maker?

It's what I do, Stuart. I break ground. I trailblaze. I make history in 3D. The funny part is that we were the first beneficiaries of James Cameron's advanced 3D technology post-Avatar. I was on a plane with one of our producers and I thought: "Gosh, we have all these visually incredible scenes. How can I utilise my body in a way that we've never seen before?" I didn't wanna punch at the camera or kick at the camera. Then I thought what if I make my pecs – and, for the record, not man boobs, Stuart, they're called pecs (5) – bounce into the audience? My producer was eating peanuts and he says: "I got it. What if a character bounces berries off your pecs into the audience?" and I said: "That's brilliant! Then we'll do rapid-fire, so we'll have multiple berries bouncing off my pecs into the faces of the audience!" And then with that, my friend, comes making history.


Is the Pec Pop of Love (6) really a proven seduction technique?

It is proven. Not everyone can do it, because, let's face it, it's a gift. But it will get the attention of a woman anywhere around the world. Now, I'm not saying that that shit works. I am saying that it will get her attention. What comes out of your mouth next is going to be the determining factor of whether or not you're gonna do the horizontal hula with her.


Wrestlers don't traditionally have the best reputation when it comes to film-making. Are there any other films starring wrestlers that you've enjoyed?

[Long pause] The only film I've enjoyed starring a wrestler was Mickey Rourke in The Wrestler (7). That's it.


I could never smell what The Rock was cooking, by the way. What was it?

I'm glad you asked. It's Chilean blackened sea bass with crushed mango on the side, a bottle of Red Bull and a dozen hairy doughnuts. THAT is what I'm cooking.

1 Probably not the famed British wrestler of the same name. He died in 1997. The likelihood is this is a colloquialism. 2 Forthcoming sequel to 2008's Journey to the Centre of the Earth. 3 Michael Caine plays the grandfather of The Rock's stepson. He spends some of the film riding around on a giant bee. 4 No 3, September 2000. 5 I apologise. 6 When a man jiggles his pecs around until a woman becomes unable to resist him. 7 Other acceptable answer: They Live, starring "Rowdy" Roddy Piper.