WikiLeaks the play: 'Everyone will have something to be aggrieved about'

In Australia, it was called Stainless Steel Rat and had lots of sex. So why did play about Julian Assange have to be rewritten for Britain? 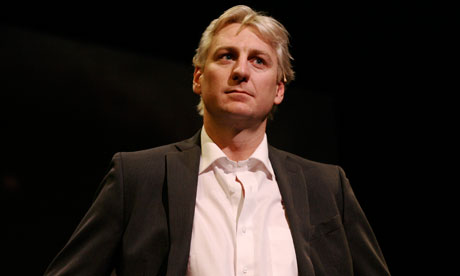 Man in the Middle .... Darren Weller as Julian Assange.

The dialogue isn't exactly Shakespeare, but it's still rather thrilling to see such recent history on stage. Man in the Middle, a play about WikiLeaks founder Julian Assange, was written by Ron Elisha and originally staged last summer in Australia, under the title Stainless Steel Rat (a name its new producers, Theatre503, considered "too loaded" for the UK).

Since then, the play has been substantially revised, losing a subplot about a film-maker that mystified the show's original audiences. There is now less sex, partly for legal reasons – though the alleged rape in Sweden does feature, albeit off stage. One pro-Assange Aussie blogger was particularly offended by the drama's original denouement, describing it as "an imaginary shouting match between Julian and his British lawyer Mark Stephens CBE, followed by a 50-year-old pornographer rooting a teenager up the arse".

Since the UK production started rehearsals on 14 December, Man in the Middle has gone through 14 drafts. Its director Lucy Skilbeck bills it as "a wiki-play", in other words "quick – a rapid response to changing situations". Three new scenes reflect Assange's current predicament, linked by the US authorities to Bradley Manning via chat logs, with the prospect of life in jail for treason – or worse. The subplot has also been replaced with "some social media elements", says Skilbeck. "The idea that people are always watching from the outside", and often getting it wrong. We see characters observing the action, tweeting about it, and misinterpreting it.

Theatre503's founders, Paul Robinson and Tim Roseman, say they took the play on "really late in the day. We found ourselves with a last-minute hole in the programme and there was a very finite amount of time – we either did it right now or not at all. This story could be chip paper in September." The pair pride themselves on making theatre as up-to-the-minute as possible. "Theatre speaks a lot about being very steeped in the now, and what that tends to mean is a year later," says Robinson. "Because we're a small organisation, with only six people working on a production, we can be nimble and reactive. An audience can come in having read something in the paper that day, and see something that connects with it."

Darren Weller has been playing Assange since the play's first performance last June. Is he fun to play? "Funner and funner," he says. "His public persona is very level, he's totally focused and intelligent, yet there are all these stories about him being quick-tempered and mercurial. It's great to be able to play a role where you can turn on a dime. He's a wry shit-stirrer as well, and that's a very Australian thing. I grew up in the same town as him in Queensland, and there's this sly, underhand sense of humour that he has. You see it in a lot of his interviews, where he's taking the piss and people don't really get it."

The production team believe Man in the Middle is a nuanced portrait. "The pro-Assange lobby will find plenty to admire and plenty to be aggrieved about, and the anti-Assange lobby will have exactly the same experience," says Roseman. "If we come out having pissed off everybody we've probably done quite well."

Weller says that, as well as outlining Assange's famous flaws (which the character lists himself in the play's "horny bastard" speech), Man in the Middle reminds us why we were captivated by him in the first place. "This is actually about very big, important ideas. It would be a lot easier if everyone who did heroic and idealistic things was also a good person," says Skilbeck. "If everyone was Nelson Mandela then it would be much simpler. But they're not, and I find that tension between the desire to do that good thing and human fallibility a really interesting dynamic."

It's a tension that has appealed to other artists. There has already been an Assange opera, a Spielberg film is mooted, and a torrent of books have been published, including Andrew O'Hagan's ghosted autobiography, published in September without Assange's consent – and now a detail in the play, too. "When I read the Unauthorised Autobiography I was struck by how well Ron had captured his voice," says Skilbeck. "He sounds just like the guy in this play."

O'Hagan's biography was also notable for selling far fewer copies than anticipated, suggesting that public interest in Assange may be waning. Weller says that, in Australia, his dyed white mane had people shouting "Julian!" after him; this hasn't happened in London. Yet Skilbeck and Weller are confident that, while time may bring a fuller theatrical portrait of Assange, theirs remains a "cracking story". "Australia's the arse end of the world, and he came from the arse end of Australia. Am I allowed to say that?" Skilbeck says, to gasps from Weller. "And he has the US administration in fits about him. He's changed the world so radically that whoever he was, it would be an extraordinary story."