Shakespeare was too uncouth and unijicated to write those plays

pinhedz wrote:The search for the true author of Shakespeare's plays always seems boxed in by the assumption that they must all have been written by one person. Isn't that assumption rather unintelligent?

The demand for new material was so great in the Elizabethan/Jacobean theatre- the turnover of plays being so rapid- that collaboration was the rule rather than the exception.

There's plenty of internal textural evidence that certain scenes from Shakespeare's canon were penned by Beaumont, Fletcher, Jonson and others.

He's very unlikely, for example to have written the first scene of Macbeth:

First Witch
1 When shall we three meet again?
2 In thunder, lightning, or in rain?


Second Witch
3 When the hurlyburly's done,
4 When the battle's lost and won.


Third Witch
5 That will be ere the set of sun.

First Witch
6 Where the place?

Second Witch
Upon the heath.

Third Witch
7 There to meet with Macbeth.


ALL
11 Fair is foul, and foul is fair:
12 Hover through the fog and filthy air.

If anything, Shakespeare is remarkable for his comparatively small degree of collaboration with other writers, but even he couldn't entirely avoid the necessity imposed by the supply & demand economics of his industry.

Laws of copyright in WS' day were not even a glimmer in the average author's eye.

Let's not forget that Shakespeare himself ripped off almost all his plots from classical or Renaissance authors.

And the reason we now have "bad" and "good" quarto editions of WS' plays is that rival theatre companies would pay hirelings to attend performances and memorise the lines. It's no wonder academics to this day quarrel about different readings of a particular passage. It's amusing to think that entire academic edifices have been constructed upon an anonymous minion's half-drunken recall of a speech in a noisy theatre on the South Bank of the Thames many centuries ago.

Let's face it: Shakespeare had help

Several of the Bard's plays, as was common in Elizabethan drama, incorporated the efforts of other writers – so why are we reluctant to acknowledge it? 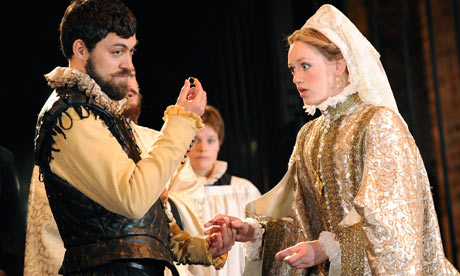 Alex Hassell and Lucy Briggs-Owen in the RSC's Cardenio, at Stratford-upon-Avon. Photograph: Tristram Kenton for the Guardian

The depressingly predictable decision to make Shakespeare the focus of Olympic-year festivals in British theatre and at the BBC increases the sense that cultural and academic establishments are pulling in different directions. While the name of William Shakespeare is slapped ever more enthusiastically across theatre posters and radio and TV billings, universities are reducing the size of his typeface to make space for collaborators: most recently, the suggestion that Thomas Middleton wrote significant sections of All's Well That End's Well.

I hold boringly to the belief that the plays attributed to Shakespeare were substantially written by the glover's son from Stratford baptised under that name, and regard as nonsensical tosh Roland Emmerich's movie Anonymous, with its advocacy of the Earl of Oxford as England's secret theatrical genius. However, the increasing recognition of the extent of co-writing in the Shakespeare canon has been one of the most thought-provoking developments in my reading and theatre-going life.

Reading the magnificent Thomas Middleton: The Collected Works, edited by Gary Taylor and John Lavagnino, I was startled to find that it includes the full texts of Macbeth, Measure for Measure and Timon of Athens. This was at one level a rhetorical flourish – justified by the fact that Middleton may have at some point performed what Hollywood now calls a "polish" – but the edition was also fascinatingly exact on the stretches of text in these Shakespeare plays that are now believed, from forensic linguistic analysis, to have been written by Middleton.

The work of Taylor and Lavagnino and of James Shapiro, in his brilliant book Contested Will, has radically changed my attitude to Shakespeare on page and stage, and seems to me to raise significant questions about the approaches of the educational and theatrical industries in Britain. As Shapiro sets out in the final chapter of his book, the point is not that Oxford, Bacon or Elizabeth I secretly wrote the plays of Shakespeare, but that Elizabethan theatre was fundamentally collaborative in a way that the sole focus on Shakespeare has left most professors and producers reluctant to acknowledge.

The question now is how far the consequences of this scholarship should be felt in theatre and the media. There's no case yet for the RSC's notepaper to be altered to read The Royal Shakespeare and Middleton and Others Company, but there must now be an argument for posters and programmes for future productions of Macbeth, Measure for Measure, Timon of Athens and now All's Well That End's Well carrying a joint credit to Shakespeare and Middleton.

When Gregory Doran, who is soon to take over as the RSC's artistic director, staged last winter a reconstruction of a play called Cardenio – a text seemingly co-written by Shakespeare that has since disappeared – the supporting material, both in the theatre and online, was conscientiously clear about the provenance of what we were watching. So Doran's stewardship of the company might be a good time to explore whether the credit needs to be shared more widely in other cases as well.

As a great deal of Elizabethan drama seems to have operated in a way now common in movie-making, with the text incorporating the efforts of various writers and the interpolations of actors, Hollywood might offer a useful model. In film-making, a committee of the Writers' Guild arbitrates over who gets their names on the screen. Income and reputation are less of an issue for writers who have been dead for four centuries, so the process can be less official, but producers and directors of Shakespeare might still learn from the scrupulous attributions of the movies, which draw careful distinctions between the significance of different contributions.

Mark Lawson wrote: – so why are we reluctant to acknowledge it?

Are we (whoever "we" is)? I thought it was widely acknowledged.

To be fair to Mark Lawson, the eye-catching headline above his article was probably penned by a sub-editor.

Similar topics
» Do you write comments etc in the margins of your books?
» Lousy plays
» Streep plays Thatcher
» English medieval mystery plays
» What did Shakespeare look like?