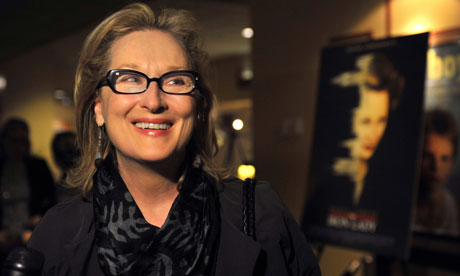 Meryl Streep's much lauded performance in Margaret Thatcher biopic The Iron Lady won her the best actress award from the New York Critics Circle on Tuesday. And it looks set to be the first of many prizes.

Streep, 62, holds the record for the most acting Oscar nominations – she has so far clocked up 16, but has not managed a win since Sophie's Choice 30 years ago. Not only is she perceived as overdue the honour, but her performance in Phyllida Lloyd's film, which shows the former prime minister looking back over her career as she struggles with dementia and bereavement, has been praised even by those uncertain about the movie's politics. The Guardian's Xan Brooks called Streep's turn "astonishing and all but flawless; a masterpiece of mimicry which re-imagines Thatcher in all her half-forgotten glory. Streep has the basilisk stare; the tilted, faintly predatory posture. Her delivery, too, is eerily good – a show of demure solicitude, invariably overtaken by steely, wild-eyed stridency".

William Hill quotes odds of 6/5 against a Streep Oscar, although there have been questions about how well the film will play outside the UK. Trailing her are Viola Davis, for her incendiary performance in civil rights drama The Help; Michelle Williams, for another biopic, My Week with Marilyn, and Glen Close, whose turn as a cross-dressing 19th century Irish butler in Albert Nobbs is currently quoted at 6/1.

The New York critics awarded the best actor prize to Brad Pitt, who played a disciplinarian father in Terrence Malick's The Tree of Life. Another film which premiered at Cannes this year, The Artist, which is set during the advent of the talkies, picked up the best picture award. Should it repeat the trick at the Oscars in February will be the first silent film to win since Wings at the inaugural ceremony in 1929.

Biopic starring Meryl Streep has been criticised by John Campbell, who wrote the book on which the film is based 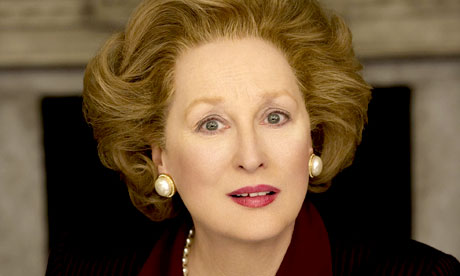 It has already been dismissed by Norman Tebbit, despite Meryl Streep being discussed as a shoo-in for an Oscar for her portrayal of Margaret Thatcher. Now The Iron Lady, Phyllida Lloyd's much-discussed biopic of Britain's first female prime minister, has been criticised for inaccuracy by Thatcher biographer John Campbell.

The accusation holds some weight because Campbell's book, also titled The Iron Lady, was used as the basis for Lloyd's film. The author is concerned that screenwriters chose to enhance the prime minister's role in important affairs of the 1980s at the expense of other key figures, such as her foreign secretary Geoffrey Howe.

"Like any film of that sort, it simplifies and it dramatises her as a great individual, fighting against all these things as if it was just her on her own," Campbell tells the Daily Telegraph. "It does not credit her colleagues like Geoffrey Howe, or anybody else. The other politicians are made to look wet – she bashes them.

"There aren't many males in the film, so you don't get a real sense of the truth. Instead, it suggests that it was just her that brought the Soviet Union down. It's over-simplified history and there is too much concentration on her. There is a lot of poetic licence going on, including Meryl's way of talking to colleagues.

"The men aren't given important roles, particularly Howe. He isn't viewed as important and is presented as a bit of a caricature, like a weak teddy bear. He is given no credit for his work as chancellor of the exchequer and he really deserves a great deal of the credit. It does over-egg Thatcher's role, it's not that accurate a historical representation."

Campbell, who acted as a consultant on the film and was even given a cameo role as the manager of an ice-cream company visited by Thatcher, has written two books about the former premier, 2000's Margaret Thatcher: The Grocer's Daughter and 2003's Margaret Thatcher: The Iron Lady, along with biographies of Edward Heath, Roy Jenkins and Aneurin Bevan. Despite his misgivings, he conceded that Lloyd's film remained "a remarkable piece of work and a remarkable portrayal by Meryl Streep". The latter was nominated yesterday for a Golden Globe as best actress in a drama, the latest in a steady flow of garlands from various critics bodies over the past month.

Tebbit, who was a member of Thatcher's cabinet between 1981 and 1987, was not so impressed by the US actor's performance. Writing in the Telegraph earlier this year, he said: "She was never, in my experience, the half-hysterical, over-emotional, over-acting woman portrayed by Meryl Streep." 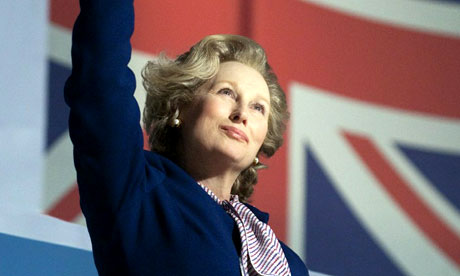 Conservative MPs have called for a House of Commons debate over The Iron Lady, the Oscar-tipped film about Margaret Thatcher which stars Meryl Streep as Britain's formidable first female PM.

Ahead of the movie's release in UK cinemas next month, Tory MP for Reading East Rob Wilson said Phyllida Lloyd's biopic presented an "intrusive and unfair" picture of Thatcher, having chosen to depict her as "old, lonely, fragile and suffering from dementia" in some segments. He argued that Lloyd and screenwriter Abi Morgan ought to have focused more closely on the younger years of the Lincolnshire-born grocer's daughter, who became the UK's longest-serving 20th century leader.

Wilson, a parliamentary private secretary to the culture secretary, Jeremy Hunt, called for a Commons debate on "respect, good manners and good taste". While accepting that The Iron Lady was "well made" and "brilliantly acted", he said: "I just wonder why the film-makers had to go so heavily on the mental illness, the dementia side, when Baroness Thatcher has had a very important life in the politics of this country and the world. It left me wondering about the humanity of the film-makers who are very subtly denigrating someone who was a great prime minister." Wilson said Thatcher was not so frail, having sat in the House of Lords, where she holds a life peerage, and attended events such as Liam Fox's 50th birthday party this year.

Commons leader Sir George Young said he welcomed a debate on The Iron Lady, adding that he had heard "conflicting views" about the film. Other Conservative figures such as Thatcher's former right-hand man Norman Tebbit have also been less than positive about the movie. Writing in the Telegraph earlier this year, he said: "She was never, in my experience, the half-hysterical, over-emotional, over-acting woman portrayed by Meryl Streep." Thatcher's biographer, John Campbell, has expressed irritation at what he said was the film's tendency to enhance the prime minister's role in important affairs of the 1980s at the expense of other key figures, such as her foreign secretary Geoffrey Howe.

Tory grumbles have so far failed to dent Streep's prospects of picking up her third Oscar at February's Academy Awards. The American actor was nominated for a Golden Globe for best actress in a drama last week and won a best actress prize from the New York Film Critics Circle earlier in the year.

The Iron Lady's Meryl Streep says Thatcher 'was a feminist'

Oscar-nominated actor says former British prime minister 'was a feminist, whether she likes it or not', as she picks up lifetime achievement award at the Berlin film festival 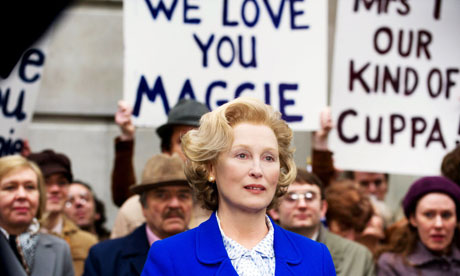 Oscars frontrunner Meryl Streep described Margaret Thatcher, who she portrays in the Bafta-winning The Iron Lady, as a "feminist, whether she likes it or not" and labelled awards season "a sporting event … you haven't signed up for", as she picked up a lifetime achievement award at the Berlin film festival.

Streep, 62, said most people had more in common with Thatcher than they would care to admit, pointing out that the former premier was in favour of abortion and was well aware of the dangers of global warming before it was a fashionable topic.

"She would have been kicking and screaming the entire way to the feminist altar, but she was a feminist, whether she likes it or not," added Streep, describing Thatcher as incredibly "brave" for her time. "A lot surprised me," she said.

Streep, who is neck and neck with Screen Actors Guild (SAG) prize winner Viola Davis (The Help) in the race for the best actress Oscar following victories at the Golden Globes and Baftas, picked up an honorary Golden Bear at Berlin. Her portrayal of the former British prime minister brought her a record 17th Oscar nomination earlier this year – though she has actually won only twice, for 1979's Kramer vs Kramer (best supporting actress) and 1982's Sophie's Choice (best actress). Both films are being screened in Berlin, along with The Iron Lady and four other Streep movies as part of the festival's celebration of the New Jersey-born actor's work.

"Suddenly you feel like you're in a sporting event and you haven't signed up for it," Streep said of her current awards season buzz. "You did some work in a film that you're proud of and you are hoping that people will go and see it, and suddenly you're doing calisthenics to get ready for [the] Super Bowl." She pointed out that many actors do not receive recognition for their strong work, singling out Margaret's Anna Paquin and Tyrannosaur's Olivia Colman as two who have been unlucky to miss out this year.

While Streep is lapping up most of the publicity in the runup to the Academy awards on 26 February at the Kodak Theatre in Los Angeles, she faces an uphill struggle to convert her Bafta and Golden Globe wins into Oscars glory. Davis's SAG victory for leading female actor puts her in the driving seat because the winner of that award has gone on to take the Academy prize for best actress six times in the last eight years. The other nominees are Glenn Close for Albert Nobbs, Rooney Mara for The Girl with the Dragon Tattoo and Michelle Williams for My Week with Marilyn.

Steve Bell on the Leveson inquiry 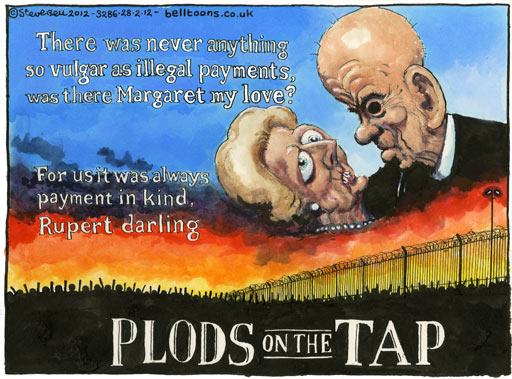