When your teacher is a performance poet, English lessons can have a different accent 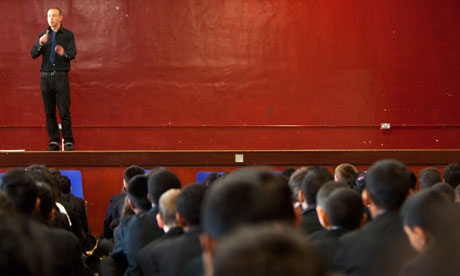 Neat rows of well-behaved year 9s collapse into giggles and cover their faces with their hands as, on the stage, English teacher Sam Berkson launches into a Linton Kwesi Johnson poem, Mekin Histri, in a startling Jamaican accent:

What most of them don't know is that by night Berkson is a performance poet known as Angry Sam – and he's not about to be put off by a little teenage embarrassment. They are won over by his conviction and clarity, and soon become mesmerised. Berkson is not so much reciting the poem as rapping it, and he gets them to chant the chorus:

It is noh mistri

It is noh mistri

Berkson and art teacher Chris Beschi, another poet-by-night whose performance name is Curious, have organised a slam at Kingsbury high school, a huge comprehensive in north-west London. They're doing four poems from the year 9 syllabus in the style of a hip-hop contest, and giving the school's 300 year 9s the chance to vote for their favourite.

They have chosen poems about London, one thing their diverse group of pupils has in common. The earliest is William Blake's London (1794) followed by William Wordsworth's Composed Upon Westminster Bridge (1802). The most modern is Kate Tempest's Cannibal Kids, an extraordinary rap about the capital's disaffected youth.

The teachers adopt the persona and speech patterns of each poet, and say a little about themselves before they launch with gusto into the poems.


Poetry may once have been seen as a bit "girly" but hip-hop has transformed that. These days, teenagers are constantly listening to intricate rhymes written by the artists they admire, both American and British. They watch rappers compete to see who can outwit and outperform the rest. There is an energy, beat and relevance that chimes with other aspects of urban culture: hip-hop dance styles, DJing, and graffiti art.

Beschi says: "A big part of making the link between the academic poetry syllabus and the students' love of hip-hop is having people perform it who understand poetry, who have a passion for it, and who write it themselves."

Do pupils identify poetry and rap as the same thing? "Not of their own accord," Beschi says. "They understand the link once other people make it."

Berkson adds: "Many kids are interested in lyrics, and in writing lyrics themselves – and it's not that different from writing poetry." What poets call "lines", rappers call "bars", the poets explain. "Generally, kids will write 16 bars," says Beschi. "In their heads they are hearing a 4/4 rhythm and writing to that."

Berkson says: "The beauty of our approach is that it breaks down the barrier between what they're already into and academic poetry."

Judging by the attention of the pupils in the hall, and the cheers that greet every poem, it's working. Could other teachers do what they are doing, or would it just be embarrassing if they tried?

Beschi says: "I would argue that it doesn't work for everyone. You have an authenticity as a poet that comes into your work as a teacher. And I don't think you can fake that. Being involved in the writing, performing, promoting process – there's something important about artists teaching, practitioners teaching."

But age and accent are certainly not barriers, says Berkson : "It doesn't matter if you are middle-class or middle-aged, it's just if you've got a feeling for poetry. And that comes from a deep involvement.

"Performing poetry is a chance to model the learning behaviour that you want from students," says Beschi. "If you're a white middle-class person reading Linton Kwesi Johnson in a cod patois accent, you're just reversing the role that you ask of your patois-speaking Jamaican student when you get them to read Blake.

"That's really important, not just in teaching poetry but in teaching anything: modelling that kind of academic risk-taking. You're saying: 'I'm going to do something I'm not familiar with because that's what learning is – I try things I don't know'."

Besides teaching art, Beschi is also Kingsbury's behaviour support manager, and uses poetry to help students with emotional issues. "Poetry can be a channel for frustration and anger. When kids write rap and express their thoughts in a creative way, it's cathartic for them. It's a way of getting things off your chest," he says.

Rap can be pretty crude, he admits. "A lot of the rap that kids listen to doesn't come from record labels, it's home-grown, recorded on your mate's phone, put on YouTube. There's no editing process – it's really coarse.

"And what comes across is that it's an expression of confusion. They're not feeling empowered but they don't really know why. They have a sense that they're part of a structure they can't control. This is a way of getting some control."


The government is keen that pupils study "useful" subjects such as science and maths. But poetry, say the teachers, teaches equally valuable skills – students learn to analyse, to communicate, and to believe in themselves.

"By giving people the opportunity to perform poetry, you're letting them express their own ideas, which there isn't much space for in the English curriculum," says Beschi. "It's empowering to have your ideas heard and discussed."

Berkson adds: "The benefit comes across as confidence. Often people say about public school kids: 'They've got a real confidence about them'. Affluent kids go out and do things; they feel they have the right to ask for stuff and make things happen. And kids who aren't from that background feel that their role in society is to follow. They don't feel like they could be a leader of society. It's vital to build their self-worth and give them a sense that there is a value to their thoughts."

Performing verse, rapping, can give you status among your peers too, the teachers say. Being an urban poet is a pretty cool thing to be these days.

At the end of the slam, Mekin Histri wins convincingly. A group of pupils tells me: "We liked it when he did the accent. We were happy that it was something different, not formal English."

"Using audience participation means they invested in the poem," says Beschi. "And it's a great poem – angry, but also uplifting."

"The last poem in a slam always wins," says Berkson.