Modernist Cuisine: 'unparalleled in its breadth and depth'

Modernist Cuisine is a six-volume, 2,300 page behemoth. Rosie Birkett speaks to its author Nathan Myhrvold and asks some top chefs why it's the cookbook they've been waiting for 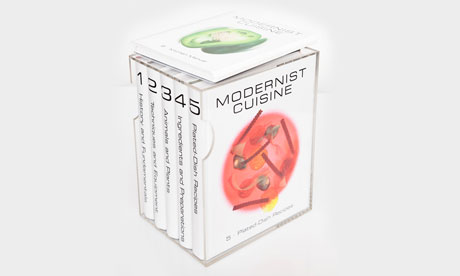 Modernist Cuisine: The Art & Science of Cooking is a real heavyweight cookbook. Photograph: The Cooking Lab

In his foreword, Ferran Adrià describes Modernist Cuisine: The Art & Science of Cooking as "not strictly a cookbook, but something more: a work that will change the way we understand the modern kitchen and gastronomy." David Chang calls it "the cookbook to end all cookbooks" and Wylie Dufresne declares that it's "unparalleled in its breadth and depth".

Modernist Cuisine: The Art and Science of Cooking by Nathan Myhrvold, Chris Young

Granted, it is not without error, but this book is getting a lot of serious chefs very excited. It's the brainchild of Nathan Myhrvold, whose achievements include a PhD in mathematical physics, working with Stephen Hawking on the quantum theory of gravitation, and becoming Microsoft's first chief technology officer. Oh, and he's also a classically French-trained chef. "I've been interested in cooking my whole life," says Myrvold, who cooked Thanksgiving dinner for his whole family at the age of nine.

When he left Microsoft in 1999 he began cooking with the modern techniques that had been emerging in restaurants. It was then that he saw an opportunity. "If you were fortunate enough to cook with Heston Blumenthal or Ferran Adrià or one of the other modernist chefs directly, you could learn these things, but otherwise, there was no one place to glean them. So I realised I could make a real contribution to the world of cooking if I could just put all that stuff in one place."

And this one place comprises a monstrous, six volume tome of 2,348 pages that took a 20-something team working out of a development lab kitchen three and a half years to complete.

In its six books (History and Fundamentals; Techniques and Equipment; Animals and Plants; Ingredients and Preparations; Plated Dish-Recipes and Kitchen Manual) it tackles everything from the hunter-gatherer origins of food to the evolution of high-end cuisine, blowing the lid off the modern, science-led techniques used in some of the world's most revered kitchens. Forensically detailed photography demonstrates finer points only previously touched on in the cookbooks of chefs such as Blumenthal and Adrià. There are whole comprehensive sections dedicated to exploring foams, gels, water bath cooking, and the equipment, like centrifuges, freeze-dryers and homogenisers, that make these things possible.

The authors argue that the approach adopted by chefs such as Heston Blumenthal, Thomas Keller and Adrià in the past two decades constitutes not just the "ultimate culinary revolution", but a "modernist movement" akin to the French impressionist painters of the 19th century in its creativity and challenge of culinary assumptions. "Cooking is an art, it's not about science, but all art utilises science at some level," says Myrhvold. He balks at the criticism levelled at sous vide or water bath cooking, a method central to the book, which has been accused of taking the "soul" out of the kitchen. "I don't understand that argument and I don't think it's very logically thought through," he says. "Sous vide cooking is about temperature control and using a water bath which has a digital thermostat which exactly regulates the temperature. Why is it soulful for me to play human thermostat? I don't think there's any soul or artistic creativity in me sitting there and trying to be a bad version of that thermostat."

"What's so fantastic about this book is that it's a massive window on modern gastronomy and what chefs all over the world are doing," says Heston Blumenthal, who co-wrote a "Statement on New Cookery" with Harold McGee, Adrià, Keller and Myrhvold in 2006. For years Blumenthal has been vocal against the "molecular gastronomy" label used to describe his cooking. Modernist Cuisine, he says, could finally sound the death knell for that phrase. "Apart from the book being fantastic – what's great is that people are now calling it a "modernist movement", and I feel much happier with that. With the "modernist" idea – you can be a baker, a chocolate maker, have a steak house or a three-Michelin-starred creative restaurant – it doesn't matter, and so I think Nathan has really cracked it."

For three-Michelin-starred New York chef Daniel Boulud, Modernist Cuisine is "a compilation and a collaboration with lots of chefs and it's maybe the most interesting one ever made." Boulud has vowed to buy a copy of the book for each of his executive chefs "because I feel that it's something really tremendous in our time. It's not often that someone comes up with such an extensive compilation of an updated, actual cuisine du jour." Another chef who's been quick to get his hands on a copy is Nottingham's Michelin-starred Sat Bains. "I look at it as a reference book. It's not going to cover every subject, but it will tell you about proteins and which temperature to cook eggs at and you can use it in an easy way because it's in one body of work ... What's fascinating is that there's no secrets: it's telling you the chemistry and the physics of what's going on so it enables you to become a better chef.