all across the universe :: Music :: Jazz

From Toni Morrison to Roddy Doyle, the novelist picks the titles that really make this subject swing 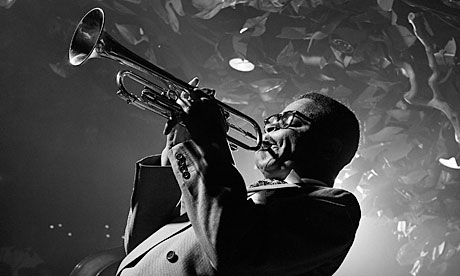 Reggie Nadelson is a New Yorker who also makes her home in London. As well as newspaper journalism, she has also written and produced documentaries for the BBC, including Comrade Rockstar, about 'the Red Elvis', which she subsequently developed into the book of the same title.

She also introduced a collection of the great jazz photographer Herman Leonard's work, Jazz, last year. Nadelson's best known creation, however, is the detective Artie Cohen, a New York City cop. Artie first appeared in 1995 in Red Mercury Blues, and has appeared in eight further novels since then. The latest Artie Cohen novel, Blood Count, is newly published in paperback by Atlantic.

"It's difficult to choose great fiction about jazz because so many writers try to invent a prose that somehow mimics the music, an almost impossible feat. In my own novels, a series of thrillers mostly set in New York, I've tried to find a little space to refer to the music I love. Artie Cohen, my main character, is a Russian-born, New York detective, who has loved the music all his life. In Moscow, as a boy, he listened under the covers to Willis Connover's Jazz Hour on the Voice of America. In New York, he listens to the music all the time – at home, on cases, in his car. Blood Count, my current book and Artie's most recent case, is set in a grand old apartment building in Harlem's Sugar Hill, the area where Count Basie, Billie Holiday, Duke Ellington all lived. Blood Count is the title of Billy Strayhorn's last song, which he wrote while he was dying.


"Of the books I've chosen, there are three where the authors somehow achieve a kind of "jazz prose", this without forgetting the narrative. Of the thousands of non-fiction books about jazz and jazz musicians, I've picked those that seem to really illuminate their subjects in an original way, and tell you something new about the music and the musicians, something new about American culture. "


1. Coming Through Slaughter by Michael Ondaatje
This is a brilliant novel imagining Buddy Bolden, the man many feel more or less invented jazz in New Orleans at the turn of the 20th century in New Orleans. There is no known recording of Bolden's music. And he spent the last decades of his life in a mental institution. Ondaatje's genius here is to re-invent Bolden and the world of Storyville – New Orleans Red Light District – and make us hear the music he played.

Set in Harlem during the Jazz Age, this is the story of interlocking characters in New York and how they made the journey north—tragic, ecstatic, terrible, thrilling. Morrison is one of the few authors who can really make her prose swing, can make you feel what jazz music meant, felt like, did to people, in its first great era.


3. Oh, Play That Thing by Roddy Doyle
A novel about an Irishman who, having escape Ireland in the 1920s, finds himself first in New York and then Chicago. The New York section seems stodgy to me, but when the hero gets to Chicago and becomes Louis Armstrong's "white man", it really takes off. The great set piece of the book is when Armstrong plays those numbers that became known as The Hot Fives and Sevens, and changed music, and America, forever.


4. The Blue Moment by Richard Williams
This is a unique, exquisitely written meditation on Miles Davis' album, King of Blue. The all time best seller of jazz albums, as Williams points out, Kind of Blue exists in a world of its own. In the book, he reveals how it was made, what influenced Miles, the musicians he worked with. It is about how the album went on to influence jazz and all modern music. But there is something more: this is an investigation into blue itself, the very meaning of the color.


5. Lush Life, a biography of Billy Strayhorn by David Hadju
Billy Strayhorn is one of the lesser known figures in jazz, but one of the most important. Hadju writes of the relationship between Duke Ellington and Billy Strayhorn, and the music on which they collaborated – their songs included Take the A Train, Lush Life and scores of others. But this is also the story of a remarkable man. Strayhorn, who had the talent to be a star, to lead his own band, but stayed just out of the limelight so he could live as he chose. And he chose to live – with enormous courage and tremendous panache – as an openly gay man in Harlem as early as the 1940s.


7. Hear Me Talkin' To Ya, the Story of Jazz As Told By the Men Who Made It by Nat Shapiro and Nat Hentoff
This is an oral history of jazz published in 1955, in which a huge range of musicians from that time and earlier talk about the music, themselves and each other: Jelly Roll Morton, Ella Fitzgerald, Louis Armstrong, Charlie Parker Dizzy Gillespie, Billy Eckstein and many more.


8. Jazz by Gary Giddins and Scott Deveaux
I have a friend in London who keeps asking me "What is Jazz?" This is the book for him and anyone who asks that question. Two of the best jazz writers and scholars give us a pretty definitive history of jazz music, which even as it teaches, manages to swing.


9. Whitney Balliett, Collected Works, A Journal of Jazz 1954-2001
The most elegant of all jazz writers, Balliett was as much journalist as critic; many of his great pieces were written for the New Yorker and other magazines, and because of it, these pieces have a real immediacy. There is a look at Ben Webster's gravestone in Copenhagen, there is Wynton Marsalis at 17 joining Art Blakey's band. There is the first Newport Festival in one piece, the meaning of 52nd Street in another. It is a living account of much that happened during half a century, and it fulfills Balliett's own description of jazz "as the sound of surprise".


10. Sweet Thunder: The Life and Times of Sugar Ray Robinson by Wil Haygood
Sugar Ray Robinson was a boxer, or course, but this wonderful biography taught me more about the world of jazz – its ecology – than almost any other. Here is a portrait of black America, the "Sepia World" from the 1930s on. Robinson carted an old record player with him along with records – Duke Ellington, Fats Waller – so he could warm up to music. Then, he would go into the ring, as Haygood writes, "guided by the jazz in his head and the beckoning lights". He loved musicians, and they loved him. He was "the first modern prizefighter to take culture — music and grace and dance — into the ring with him."

'Bird Lives' , by Ross Russell, blew me away, when I bought it, aged 22. The opening chapter, which describes one Dean Benedetti, wire-recording Charlie 'Yardbird' Parker, from inside the latrine of a club, close to, or south, of the Mexican border, is right up there with the greatest opening chapters of any book, fiction or non-fiction, I've ever read. Bird has consumed three platefuls, drunk 28 scotches, mainlined, and shagged, before wandering in through the crowd, from his dressing room, and up to the stage, blowing all the way, through an impossibly hard reed (to mere mortals), to join Dizzy et al on stage.

Similar topics
» Jazz... I don't get it
» what are books for?
» How many of these books have you read?
» Books about politics
» The Top Ten Music Books

all across the universe :: Music :: Jazz