The Rime of the Modern Mariner by Nick Hayes – review 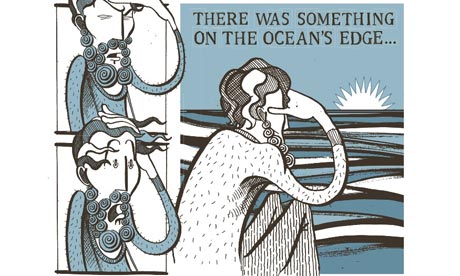 From The Rime of the Modern Mariner.

In Coleridge's The Rime of the Ancient Mariner, a wizened seadog meets three gallants on their way to a wedding and detains one of them in order to recount his terrifying story. You know the rest. The mariner's tale – out at sea he shot an albatross, causing a terrible curse to fall upon his ship and her crew – is an eerily powerful parable about the reverence a man should have for all God's creatures.

The Rime of the Modern Mariner by Nick Hayes

Is it possible to update or recast such a masterpiece? Hmm. Until last week I would have said almost certainly not. The chutzpah! But then I read Nick Hayes's The Rime of the Modern Mariner and my doubts fell away. This is a beautiful book. The text might not be so rich as the original – Hayes's nylon nets and polythene bags did not work on this reader quite so effectively as Coleridge's "death-fires" and "witch's oils" – but the illustrations more than make up for this. As a draughtsman, Hayes here places himself firmly in an English romantic tradition that includes Thomas Bewick and Eric Gill, Samuel Palmer and Stanley Spencer. As a result, holding this exquisite book in your hands (his publisher, Jonathan Cape, has spared no expense) feels akin to a sacramental act.

In Hayes's Rime, the mariner accosts an office worker in a park as he eats his lunchtime sandwich (having casually discarded the plastic box in which he bought it). The tale he tells is one of environmental disaster. Stranded in the North Pacific Gyre – a swirling and poisonous whirlpool of plastic waste – the mariner comes face to face with the consequences of our unthinking consumption. As in Coleridge's poem, there are spectral animations, and seemingly wrathful gods, but something more prosaic is at work too: the sea is a confetti of bottle tops, and when the mariner hangs the albatross's body around his neck, he sees that it has been strangled by the fine nylon gauze of a fishing net. Back on land, cradled by a bower of ancient trees, his pillow a clump of sweet cicely, the mariner finally understands that the earth, too, has a heartbeat and that we ignore it at our peril. From here on in he will remind everyone he meets of this simple truth.

Does our Blackberry-addicted drone listen? Of course not. He mistakes the mariner for a hobo, tosses him a coin and returns to "a world detached of consequence". On the way back to his shiny office block, he obliviously passes a shop called Humankind, in the window of which hangs a sign. It says "Closing down sale". Back on the park bench, our mariner listens to the melodies of the breeze, and wonders again at mankind's blithe disregard for the planet. The expression on his face combines horror and sagacity quite brilliantly. Those who know their Old Testament will think nervously of the prophets and tingle pleasurably with guilt.

From The Rime of the Modern Mariner.

The supermodel has acquired a very Romantic north London home 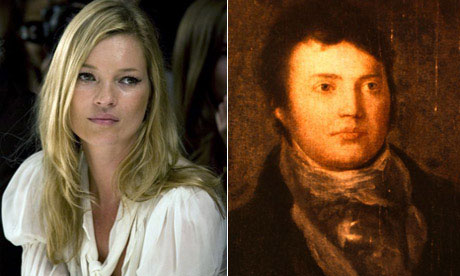 Good news that the beautiful Kate Moss is joining the poet Samuel Taylor Coleridge at No 3, The Grove, Highgate, London. Coleridge first came to live at Highgate village in 1816. He hoped to cure his opium addiction, with the help of Dr James Gillman, then living at Moreton House, Pond Square. Coleridge was 44 years old, battered and silver-haired, but still handsome and astonishingly eloquent. He carried with him the proof copy of his unpublished erotic poem "Christabel". With a gentle reminder of his wilder days, his friend Charles Lamb described Coleridge as "an Arch Angel a little damaged". We hope Moss will look on this with an understanding eye.

In fact Coleridge did not move with the Gillman family to No 3, The Grove until seven years later, in autumn 1823. By this time the worst of his opium addiction, thanks to Gillman, was under control, though there were still surreptitious visits to the side door of Dunn's the Highgate chemist, at Townshend Yard. He lived there, increasingly happily, for another decade and wrote many of his later poems there, especially in the garden. They include his infinitely touching "Youth and Age"; and perhaps his most beautiful and poignant sonnet, looking back at his drug addiction, "Work Without Hope" (1825).

Coleridge's room is on the second floor of No 3, but cannot be seen from the street. His single dormer window commands the glorious upper woods of Hampstead Heath and Kenwood House, a view he once compared to his own sacred kingdom of Kubla Khan. Coleridge grew plants on his windowsill, including the symbolic herb myrtle, emblem of lost love. He also wrote his last prose work here, a collection of grave spiritual reflections, Aids to Reflection.

At No 3 he was visited by the most influential literary figures of the next generation, including Thomas Carlyle, Ralph Waldo Emerson and the philosopher JS Mill. To them the wild poet had become a sage. After that meeting Mill wrote one of the simplest and most brilliant comments on Coleridge's work ever given. Other writers, Mill suggested, asked "what is the truth" of any particular opinion or belief. But Coleridge asked instead: "What is the meaning of it?"

Like a true Romantic, Coleridge was unusually sensitive to women. Despite – or because of – an unhappy marriage, he had a passionate if unfulfilled affair over 30 years with Sara Hutchinson, the sister-in-law of his great friend William Wordsworth. Many of his later poems were dedicated to Sara, including several written at No 3, The Grove, such as "Love's Apparition and Evanishment". For this and many other reasons, I think Coleridge would have loved the idea that Kate Moss, surely an arch angel in her own right, has come to look after him at No 3. Indeed Coleridge might even hope that Moss would celebrate his birthday, by opening the garden on 21 October each year. His fans – and hers – would certainly regard it as a wonderful glimpse of Xanadu.