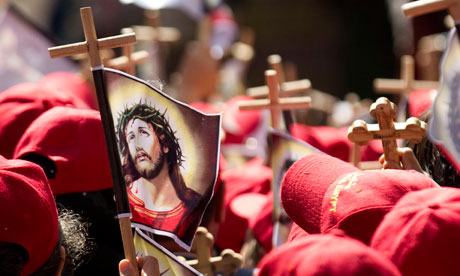 A Good Friday procession along the Via Dolorosa in Jerusalem's old city this year. Photograph: Jack Guez/AFP/Getty Images

Preaching on Good Friday on the last words of Jesus as he was being executed makes great spiritual demands on the preacher. The Jesuits began this tradition. Many Anglican churches adopted it. Faced with this privilege in New Zealand's capital city, Wellington, my second home, I was painfully aware of the context, a church deeply divided worldwide over issues of gender and sexuality. Suffering was my theme. I felt I could not escape the suffering of gay and lesbian people at the hands of the church, over many centuries.

Was that divisive issue a subject for Good Friday? For the first time in my ministry I felt it had to be. Those last words of Jesus would not let me escape. "When Jesus saw his mother and the disciple whom he loved standing near, he said to his mother, 'Woman behold your son!' Then he said to the disciple. 'Behold your mother!' And from that hour the disciple took her to his own home."

That disciple was John whom Jesus, the gospels affirm, loved in a special way. All the other disciples had fled in fear. Three women but only one man had the courage to go with Jesus to his execution. That man clearly had a unique place in the affection of Jesus. In all classic depictions of the Last Supper, a favourite subject of Christian art, John is next to Jesus, very often his head resting on Jesus's breast. Dying, Jesus asks John to look after his mother and asks his mother to accept John as her son. John takes Mary home. John becomes unmistakably part of Jesus's family.

Jesus was a Hebrew rabbi. Unusually, he was unmarried. The idea that he had a romantic relationship with Mary Magdalene is the stuff of fiction, based on no biblical evidence. The evidence, on the other hand, that he may have been what we today call gay is very strong. But even gay rights campaigners in the church have been reluctant to suggest it. A significant exception was Hugh Montefiore, bishop of Birmingham and a convert from a prominent Jewish family. He dared to suggest that possibility and was met with disdain, as though he were simply out to shock.

After much reflection and with certainly no wish to shock, I felt I was left with no option but to suggest, for the first time in half a century of my Anglican priesthood, that Jesus may well have been homosexual. Had he been devoid of sexuality, he would not have been truly human. To believe that would be heretical.

Heterosexual, bisexual, homosexual: Jesus could have been any of these. There can be no certainty which. The homosexual option simply seems the most likely. The intimate relationship with the beloved disciple points in that direction. It would be so interpreted in any person today. Although there is no rabbinic tradition of celibacy, Jesus could well have chosen to refrain from sexual activity, whether he was gay or not. Many Christians will wish to assume it, but I see no theological need to. The physical expression of faithful love is godly. To suggest otherwise is to buy into a kind of puritanism that has long tainted the churches.

All that, I felt deeply, had to be addressed on Good Friday. I saw it as an act of penitence for the suffering and persecution of homosexual people that still persists in many parts of the church. Few readers of this column are likely to be outraged any more than the liberal congregation to whom I was preaching, yet I am only too aware how hurtful these reflections will be to most theologically conservative or simply traditional Christians. The essential question for me is: what does love demand? For my critics it is more often: what does scripture say? In this case, both point in the same direction.

Whether Jesus was gay or straight in no way affects who he was and what he means for the world today. Spiritually it is immaterial. What matters in this context is that there are many gay and lesbian followers of Jesus – ordained and lay – who, despite the church, remarkably and humbly remain its faithful members. Would the Christian churches in their many guises more openly accept, embrace and love them, there would be many more disciples.