Roger Corman: 'My subconscious must be an inferno'

A one-man movie factory, Roger Corman is now the subject of a film himself. The 'pope of popular cinema' speaks to Xan Brooks in Cannes 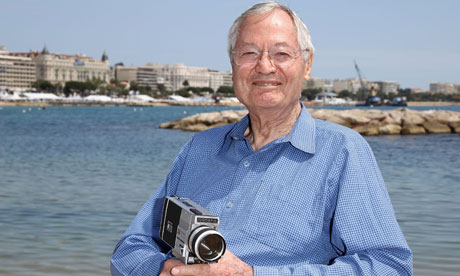 Down at the Cannes Marché du Film, the stalls sell monster flicks and "erotical thrillers", gun-toting revenge dramas and a film about a band of kung-fu ninja girls who join a beach volleyball team ("very romantic," insists the sales agent). It is a jumbled, lively place, teeming with circus barkers and recalling a bygone B-movie heyday when you could escort Betty-Sue to the drive-in, watch some screaming teenagers being chomped by a radioactive crustacean and still have change from a dollar. If Roger Corman walked in now, they'd probably hail him as a god.

Instead, I find Corman a little further up the prom, resting his bones in a hotel salon. He explains was up until 3am the night before, attending a reception on Microsoft co-founder Paul Allen's yacht, and will today present a masterclass for the Cannes elite. Small wonder he's not manning a stall in the marché. These days the "pope of popular cinema" – the father of modern movies, the creator of Naked Angels, Battle of Blood Island and It Conquered the Earth – even has an honorary Oscar on his mantelpiece. "I've heard myself described as Hollywood's longest-established rebel," he says; a double-edged compliment if ever there was one.

Corman is now 85 – too old really, he admits, to be partying on yachts. His clothes are sober, his grey hair flatly ironed, his manners impeccable. Nothing about him quite squares with the image. He could be a retired country doctor, or the proprietor of some Main Street drugstore. "I come across as a very straightforward guy and that tends to surprise people," he explains. "Clearly my subconscious mind must be some kind of boiling inferno."

It is famously said that Corman is the independent film-maker who made 250 movies and never lost a dime, except that was said many years ago and today the tally stands nearer the 400 mark. A new film, Corman's World: Exploits of a Hollywood Rebel, offers a brashly entertaining trip through his life and times. Alex Stapleton's documentary shows how he identified the teen demographic before Hollywood even knew it existed, how he saw a gap in the market and proceeded to plug it with cheap exploitation pictures; shot without a permit, on the fly, with the actors doubling up to play both the cowboys and the Native Americans, the earthlings and the Martians. Little Shop of Horrors, for instance, was filmed in three days flat. "By mistake Roger would actually make a good picture every once in a while," recalls Jack Nicholson, who toiled in the Corman vineyard for almost a decade. "But I was never in it."

Away from the set, however, he producer's taste was rather more highbrow. He loved Bergman, Fellini and Kurosawa and later helped distribute their films in the US. If those were the sort of films that Corman liked, I wonder, why he didn't try to make them himself?

"Well, firstly I'm not sure I have the ability to make that type of film," he says. "But secondly it's an economic situation. All of those films were made in Europe with government subsidies. Fellini, Bergman, Truffaut did not have the necessity of having to earn their money back and so they were free to do what they liked. In the US it's different. It's a money-making industry, so that's what you have to do."

In 1962, he shot a film called The Intruder, a hard-hitting tale of the segregated south starring the young William Shatner as a rabble-rousing white supremacist. It was, he acknowledges, probably the best film he ever made; the one that really mattered. But The Intruder bombed at the box office and this taught him a lesson. "The audience is generally right," he tells me. "Not always, but generally. And the public at that time did not want to see a film about racial integration; they simply did not want to see it. It was too close to home. We're seeing it again today with pictures about Iraq or Afghanistan. When those wars are over, hopefully soon, people might want to see films about it and those films will make money."

He smiles. "The other issue with The Intruder is that I was too overt in making my statement. So I went back to making films that put entertainment first, on the surface. If I had any social message, I kept it in the background."

Corman famously ran his company like a factory, providing an apprenticeship to a new generation of actors and film-makers. His list of graduates extends from Nicholson to Robert De Niro, Francis Ford Coppola to James Cameron, Peter Bogdanovich to Ron Howard. He insists that, by and large, he always knew which of his children would prosper and which were doomed to struggle: "Most of the good ones were good from the very first day of their very first picture." He thinks it over. "Maybe Jonathan Demme's talent was not that evident on his first film. But I had faith in him and he got better. He improved so rapidly and now he's one of the best directors in the US. But that wasn't so clear in the beginning."

If there is a criticism levelled at Corman in Stapleton's film, it's that he only ever paid scale – the Hollywood equivalent of sweatshop wages. He worked his employees to the bone, clipped their creative wings and had them shooting Dementia 13 when what they really wanted to make was Apocalypse Now. Nicholson suggests that, if only Corman had paid him slightly more, he might have allowed his former mentor to have a stake in Easy Rider, the film that finally broke him as an actor. Elsewhere, Martin Scorsese remembers Corman agreeing to finance Mean Streets – but only on the condition that the director recast it as a blaxploitation movie. (Scorsese, unsurprisingly, said no.)

I ask if he has any regrets about these decisions. If he had only paid these people more, nurtured them more, they might have taken him with them when they left the B-team to join the A. But Corman seems bemused by the question: why should he have done things differently? "It's a fair trade off. I am paying them scale – or sometimes a little above scale – and getting a talent that is greater than a scale talent. They, on the other hand, are getting an opportunity they might not otherwise get. So that's a fair trade between us. I have no objection that they will then move on and leave me behind. As a matter of fact, I expect them to move on and I'm proud when they do."

By the late 1970s, the American film industry had moved on, too. The likes of Jaws and Star Wars showed that Hollywood could do Corman-style movies on a bigger budget, with higher production values, and then distribute them more widely. Having led the pack for so long, the producer now found himself chasing it. His films, hitherto regarded as junky, disreputable trailblazers, became regarded as low-budget knock-offs of studio hits.

It transpires that Corman is still making movies; still shooting his Dinosharks and Piranhacondas. Still ordering his actors to scream and still dumping gallons of fake blood into the Gulf of Mexico. But the business has changed. Right now, he says, it's almost impossible for low-budget films to find a theatrical release, which has become a major frustration.

In the meantime, he can look back over a cv that trails on and on, through title after title. Some of these films he can't even remember making. Others (The Masque of the Red Death, The Man With the X-Ray Eyes, The Intruder) he continues to cherish to this day. "A while back I was talking to an English art critic at a dinner party," he tells me. "And he said that motion pictures weren't art. And I thought, well, I'm going to needle this guy. I said, 'Not only are motion pictures art, they are the only art.' On the basis that all other art forms have their origins in antiquity and are therefore static. Movies are the only modern art form because they embody movement, which could not be done before, and because they are both an art and a business. They are a compromised art but that's entirely fitting, because we live in a compromised world."

And what about his own particular motion pictures? "I don't know if I would say I'm an artist," says Corman. "I would say that I'm a craftsman. I attempt to ply my trade in the best possible way. If occasionally something transcends the craft, then that's wonderful." He smiles, perhaps casting his mind back across Dinoshark, Candy Stripe Nurses, any number of others. "It doesn't happen very often."