Hancock's half-finished: how Galton and Simpson revived their lost movie

They made TV history together and were planning their next film – until Tony Hancock rejected their script. Ray Galton and Alan Simpson reveal why The Day Off is now back on 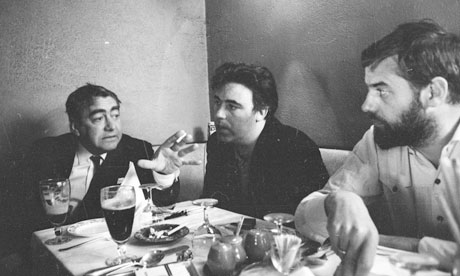 The best review we ever had wasn't from a critic. It was from an artist, Lucian Freud. He said that The Rebel was the greatest film ever made about modern art. The 1961 movie was the first, and sadly the only, film we made with Tony Hancock. It's the story of an office clerk, played by Hancock, who believes himself to be a great but undiscovered artist. When he's fired from his job he moves to Paris, in the hope that the art world will recognise him for the genius he is. Of course, being Hancock, he's a terrible painter, but his ability to act like a genius persuades a group of fashionable young artists that he might be the real deal. When he accidentally gets the credit for a better artist's work, he finds himself feted as the Next Big Thing, with inevitably disastrous results.

It's an idea that runs through a lot of our work: the gap between people's idea of themselves and how the rest of the world sees them. When we were growing up, the most popular comedies were films like The Road To series with Bob Hope, which were about very street-smart, wisecracking heroes making their way to somewhere exotic and far-flung. But we never felt that life was like that. We were much more interested in the comedy of attitude: people's attitude towards their life and situations. Failure is a lot more funny than success, and Hancock's failure was a lot more funny still, because he played it so brilliantly.

The Rebel did well at the box office, and Hancock was nominated for a Bafta as most promising newcomer (to leading film roles). At that time, the film world was rather snobbish about television actors, but Hancock was very ambitious. He didn't just want a career in British film: he wanted to be an international star. So we worked with him on various ideas, including an English adaptation of the Oscar-nominated French film The Sheep Has Five Legs, from 1954. Hancock would have played a man with four brothers, each of whom was successful in a different business. Tony tries his hand at each and manages to ruin them all.

But the idea Hancock really responded to was The Day Off. We'd all been hugely impressed by Monsieur Hulot's Holiday, Jacques Tati's wordless 1953 classic, about a good-natured pipe-smoking Frenchman at a seaside resort. Nothing much happens in it and what does happen is not very happy, but, at the same time it's very funny and there's so much warmth to the character. We liked Tati's other films, too, partly because they were so beautifully shot, but also because they weren't over-plotted. Most British comedies at that time depended on a very farcical situation, but Hulot was all about character, which was much more interesting to us. The Day Off is about just that: a London bus conductor on his one day off in the week, from the moment he wakes up to the moment he goes to bed. And in that one day, he manages to cause offence, create chaos, and (very nearly) fall in love.

Hancock loved the idea, so we wrote the whole script in just under two months and sent it to him. And then there was silence. Silence was never good. It usually meant that he was avoiding something. So eventually we called him and asked what he thought of it. "What do you think?" he asked. And it's probably at that point that we knew he wouldn't do it.

We've talked a lot over the years about why he wouldn't do it. Part of it was that he wanted an international career, and maybe felt that The Day Off was too parochial, too English. Then again, his next film was The Punch and Judy Man, and you can't get more English than that. (The film told the story of a seaside puppeteer driven to distraction by his social-climbing wife). At the same time he also fired his agent, Beryl Vertue, who was (and is) a great friend of ours, so perhaps it was his way of telling us that he didn't want us to work together any more. We were disappointed, of course, because Hancock was the best comic actor in the business. But then, if he hadn't turned us down at that point we'd never have written Steptoe and Son.

The Day Off sat in a filing cabinet in Ray's basement for almost 50 years, until Christopher Stevens discovered it last summer while writing a book about us. The Masters of Sitcom. Now it will be performed, and has been optioned to become a film. Comedy needs an audience, and we're delighted The Day Off has found one at last.

Comedy tips from the masters

Stick to the budget

In 1967, Universal called. They had a script called Pieces of Eight, about the notorious pirate Captain Morgan, the pirate. It was set in Jamaica in the 18th century and we were employed to Anglicise it, make it funnier and make it cheaper. We made it English, we made it funny – but we made it $2m more expensive, so it never got made. We wrote Pirates of the Caribbean 40 years too soon.

In 1968, we wrote the film version of Joe Orton's play Loot. Orton had only recently died and his agent, Peggy Ramsay, was very protective of his work, but without any new dialogue you couldn't film it at all. So we wrote some dialogue in the style of Orton, and Peggy was very complimentary; even she couldn't tell where he'd finished and where we started. But it's not a great film, unfortunately. We had a wonderful cast, including Richard Attenborough and Lee Remick, but the director wanted them to play it in an over-the-top style, and it doesn't work. Cary Grant, for example, only ever played it straight and he's much funnier as a result. You can also see it in someone like Jim Carrey. When he stops mugging, you suddenly realise what a good actor he is. The Truman Show is a wonderful film.

Of the American directors, Billy Wilder is the king of comedy: 1959's Some Like It Hot is an almost perfect film. And Woody Allen is amazing. Even his rubbish is better than most people's finest work. WLike them, wWe, too, have always been more interested in the comedy of attitude: people's attitude towards their life and situations, rather than lots of wisecracks.

If comedy's good, it lasts. Charlie Chaplin and Buster Keaton are still very funny. So are Laurel and Hardy. Stan Laurel was the genius: he did all the writing and directing. But they signed all their work over to the studios. Tony Hancock went to see Laurel and found him almost penniless, living in a bungalow in California. He spent all day watching his old films: what he regretted most wasn't the money, but the fact he'd lost control of his movies and the studio had recut them. All the bits of business that Laurel had choreographed had gone, cut down to 45 minutes of slapstick. Chaplin kept his own copyright. He had control of every foot of film he made.

That's the big lesson of The Day Off. After being rejected by Hancock and spending 50 years in a filing cabinet, it's been optioned as a film. So you never know what will happen.

https://www.youtube.com/watch?v=n_uq3uZmnsY
Clip from The Rebel, the Hancock movie rated so highly by Lucian Freud as a commentary on modern Art.

https://www.youtube.com/watch?v=0jfM05c3Rqg&feature=related
The Rebel- Hancock & Irene Handl as his 'Barbarian' landlady.