Shakespeare – a fraud? Anonymous is ridiculous

Roland Emmerich's new film, which suggests that William Shakespeare was a fraud, relies on the 90-year-old theories of J Thomas Looney. Do not be taken in 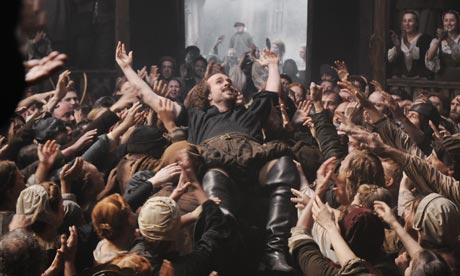 What a performance … Rafe Spall (centre) as Shakespeare in Anonymous. Photograph: Columbia/TriStar

Roland Emmerich's new film Anonymous is keen on showing that Shakespeare was a fraud and Edward de Vere, the 17th Earl of Oxford, the true author of his plays. The film is part of a broader campaign to unseat Shakespeare, one that includes a documentary by First Folio Pictures (of which Emmerich is president), along with instructional guides Sony Pictures has been distributing to teachers in America declaring that Anonymous "presents a compelling portrait of Edward de Vere as the true author of Shakespeare's plays". When Emmerich agrees to make a promotional video (part lecture, part cartoon, it shows him tossing quills that topple a statue of Shakespeare), you get a sense of how committed those behind the film are to rewriting literary history.

The claim that only a worldly aristocrat could have created such great plays might sound plausible in a blog or a book, where you can ignore nagging facts (for instance, not a shred of documentary evidence connects De Vere to the plays, and he died in 1604 before 10 or so of Shakespeare's Jacobean plays were written, several of them collaboratively). But once you have to show on film how plays were written and performed at a particular place and time, then published under another writer's name, all within well-documented cultural and historical contexts, it's no longer so easy to make a persuasive case for De Vere.

The film-makers must have realised at some point that the story they wanted to tell about De Vere couldn't accommodate what is known about Elizabethan theatrical and political culture. They had to choose: scale back claims for De Vere and admit that the film is a fantasy along the lines of Shakespeare in Love, or defy received history and assert that the truth – literary as well as political – has been suppressed through an elaborate conspiracy. The German director and his American scriptwriter, John Orloff, both on-the-record believers in the De Vere story, went with the latter, flippantly rewriting the English past. The politics behind their faith-based rather than fact-based choice make for a fascinating and troubling film.

Thanks to the miracle of computer-generated imagery, Anonymous does a stunning job of capturing the architectural details of Tudor London. But the pretence of historical realism ends there. An Elizabethan England that never had a standing army is recast as a police state, the Tower of London serving as a kind of Stalinist prison where dramatists go to betray each other to the authorities and those hauled in are roughed up. Soldiers hunting for seditious writing don't hesitate to set a public playhouse on fire. There's no room for civil liberties or a political counterweight in the film – no courts, civic authorities, preachers, privy council or Parliament.

Until De Vere comes along, Elizabethan public theatres are depicted as places where low-class actors perform silly plays written by dramatists so mediocre they can't imagine how anyone could compose an entire play in blank verse. De Vere's genius is so towering that it is unimaginable he could ever have been influenced by or collaborate with these lesser talents (and to underscore this, we are offered a flashback to 1559, when a precocious De Vere, aged nine, writes and stars in A Midsummer Night's Dream). Even Ben Jonson is a lightweight, De Vere dismissively telling him, writer to writer: "You have no voice!" Shakespeare is an illiterate, murderous, money-hungry actor and social climber. Playgoers, consistently called the "mob" throughout, are foolish and empty-headed, easily pleased and easily moved.

At the top of the political heap stands Queen Elizabeth I. Those expecting the much-admired virgin queen of biographies and popular films will be in for a surprise, for Emmerich's Elizabeth is both ditzy and wantonly promiscuous. Moviegoers may find themselves struggling to keep track of her illegitimate offspring. Each son has been farmed off to aristocratic families to raise; they may be bastards, but they are also of royal blood. The eldest is De Vere. Next, probably, is the Earl of Essex. The youngest is the Earl of Southampton, who apparently never learns that De Vere is both his brother and father (and it is left unclear whether the incestuous queen knows that her lover is also her eldest son). Elizabeth is no better at controlling her courtiers than she is her desires, and is easily manipulated by one adviser after the next. Though every woman in the film is either shrewish or sluttish, the sexual politics of the film are driven not so much by wilful misogyny as they are by a need to establish a sharp opposition between opposing political coteries bent on swaying the queen, and failing that, the people.

On one side are the dashing blond earls, committed to their aristocratic lineage and to keeping England free of the foreign rule of King James of Scotland. Pitted against them are dark, lowborn, machiavellian politicians, the Cecils – William and his deformed son Robert. The two are humourless, amoral, puritanical, and motivated by personal gain (like Shakespeare, both social and financial). Just as the theory supporting De Vere as author of Shakespeare's plays is patched together with half-truths and fantasy, so too is the political landscape of Anonymous. (Yes, all these characters are based on real people. No, Elizabeth didn't have any children. Yes, the Cecils were opposed to the Essex faction. No, it was Essex who was King James's most avid supporter in England during the closing years of Elizabeth's reign, and William Cecil who feared James bore him a grudge for his role in the death of James's mother, Mary Queen of Scots.)

Most of the film's action is concentrated in the five years from 1598 to 1603, when England's succession crisis was most intense. It is not until this time that De Vere truly finds his calling after finally entering a public theatre for the first time in his life. He sees at once how easily thousands of playgoers at a time could be manipulated by his words. Perhaps the biggest surprise of the film is that the author of the great plays is reduced to a political propagandist, his plays to vehicles to advance his faction's cause. De Vere himself is quite clear about his literary objectives: "All art is political … otherwise it is just decoration." He delightedly applauds his art's propagandistic impact at a performance of "his" Henry V that so riles the patriotic mob that actors playing the French are physically assaulted. (No, this never happened.) He then mocks a political foe, William Cecil, as Polonius, in Hamlet. (The film conveniently forgets that when Hamlet was staged Cecil was already dead.) At the film's climax, on the eve of the half-hearted Essex uprising in 1601, De Vere stages Richard III in order to win the crowd's support for his faction. Enraged, playgoers swarm out of the theatre in mid-performance, heading to court, before they are brutally gunned down on Robert Cecil's order. (No, this never happened either. Yes, the Chamberlain's Men did stage a play before the abortive uprising, but it was Richard II, and it had no direct connection with subsequent events, unforeseen at the time of the performance. Because Anonymous so badly needs to reduce Richard III to a propagandistic attack on a hunchback Robert Cecil, the substitution is made. Yet Orloff told an interviewer last month that Anonymous "is unbelievably historically accurate … stunningly accurate").

The story Anonymous tells is of defeat redeemed by "what might have been" counterfactual history: what if the truth of De Vere's authorship had never been suppressed and his works interpreted correctly? What would England be like today if the forces of commercialism and modernity embodied in Shakespeare and unscrupulous politicians such as the Cecils had not triumphed over noblemen of ancient lineage committed to an older and purer vision of the realm?

Why would Orloff and Emmerich invent such a bizarre and reactionary vision of the English past? The answer is that they didn't. They inherited it. It derives more or less intact from the work of a man named J Thomas Looney, who first proposed 90 years ago that De Vere wrote Shakespeare's plays. His book, "Shakespeare" Identified, became the bible of the movement and has shaped the case for De Vere ever since. Though you won't find this on his Wikipedia page, Looney was a priest in a cultish Victorian religious group called the "Church of Humanity" in Newcastle, positivists who worshipped Shakespeare (they even named a month after him in their calendar and his bust adorned their house of worship, along with other secular deities). Looney feared modernity, loathed democracy, and yearned for England's return to a feudal past and to a top-down society where everyone knew his and her place and the few ruled benevolently over the many.

When his church went under, Looney found a new outlet for his political views in the Shakespeare authorship controversy. He was convinced that no commoner who cared about money could have written the plays. Only a nobleman could have, one who looked backward toward feudalism rather than forward toward modernity. Looney searched and found in De Vere such a man, then read the plays and was sure he had discovered De Vere's life story in them. But the politics came first, then the suitable candidate. "How differently might the whole course of European history have unfolded," he wrote, in lines that might have accompanied the film credits to Anonymous, "if the policy of 'Shakespeare' had prevailed instead of that of the politicians of the time." Looney was also disdainful of the popular playhouses and didn't believe that audiences there could fully understand De Vere's art. Looney's disciples built on his suggestion that the true author was a man of the highest social rank, providing a stronger motive (which Emmerich and Orloff embrace) by proposing that De Vere was a Tudor prince and therefore heir to the English throne. Anonymous leaves us wondering: if only those nasty Cecils hadn't had their way, crushing the earls and silencing De Vere, a Tudor prince rather than a Scot could have succeeded Elizabeth. We might still be living the feudal dream.

Perhaps the saddest thing about Anonymous is that Emmerich and Orloff, like every supporter of De Vere I have ever encountered, would hotly deny that the class-obsessed and anti-democratic roots of the De Vere movement have influenced them in the slightest, or that its DNA runs through their arguments. Anonymous demonstrates, more convincingly and devastatingly than any Shakespeare scholar ever has, how steep a price must be paid to accept De Vere as the true author of Shakespeare's plays.

James Shapiro's 1599 and Contested Will are published by Faber.

Is this film not banned yet?

J Thomas Looney aside, (believe it or not) the other two major advocates of the "Shakespeare-was-a-fraud" theory were Sherwood E. Silliman and George M. Battey.

^
This is absolutely true, BTW.