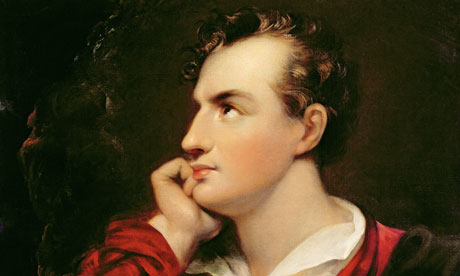 Something rich and fattening on his mind? Lord Byron. Photograph: Richard Westall

STOP! Everyone knows Byron was a great romantic poet. "I had a dream, which was not all a dream. / The bright sun was extinguish'd, and the stars / Did wander darkling in the eternal space." Very touching, I'm sure, and Byron did of course pen the odd ode. But his real claim to fame, as historian Louise Foxcroft points out in her new book Calories and Corsets, is that he was the first celebrity dieter. The Lord Byron Diet Plan influenced many a Regency dame and dandy to go easy on the pork chops.

And what, pray, was the Lord Byron Diet Plan? A thin slice of bread and a cup of tea for breakfast; a light vegetable dinner with a bottle of seltzer water tinged with wine; green tea without milk or sugar; soda water; potatoes drenched in vinegar; dry biscuits; cigars. Conscious of his "morbid propensity to fatten", he alternated between binge eating and near starvation, wrapped himself in numerous layers of clothing to sweat off the pounds, and weighed himself obsessively.

A victim of his own vanity? And insecurity. He was self-conscious about his club foot, and may have been manic depressive.

Mad, bad and dangerous to know. Thanks. I was wondering how to get his lover Lady Caroline Lamb's famous description of him in.

Lamb – is that significant given that for long periods of his life he was vegetarian? Now you're just being silly.

Any other dietary advice? He said women should only consume lobster salad and champagne in public.

Not to be confused with: Coleridge, who was enormously fat and did nothing to lose weight, which probably explains why so many of his poems were unfinished.

Don't say: "She walks in beauty, like the night / Of cloudless climes and starry skies."

Do say: "Yet once she looked an awful fright / Because she loved cold chicken pies."

Sometimes a vegetarian? I didn't know that.

Shelley was a vegetarian.