Daniel Craig: the man with the 007 tattoo

Daniel Craig is currently between Bonds, and heading up a Stieg Larsson adaptation. But, he tells Ryan Gilbey, he's itching to get back on her majesty's secret service 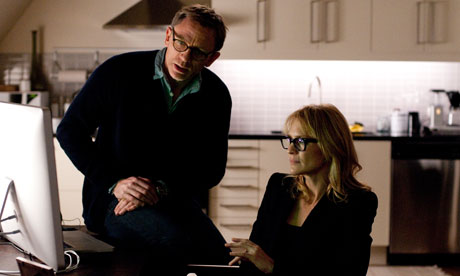 The surprise upon meeting Daniel Craig is his gentleness. It isn't that you expect him to be scarred and basted and bleeding, as he is throughout much of Casino Royale and Quantum of Solace, the two films in which he has played James Bond. (He is currently shooting a third, Skyfall, which will open next October, and is rumoured to have signed up for a further five.) But he goes beyond politeness: he's relaxed, even goofy, and quick to laugh, especially at himself. The blue eyes, which can seem glacial in his closeups as Bond, are warm and zesty. His features are as deeply etched as the grooves of a wood carving; the hair is sandy-coloured and fluffy. What else? There's the genuine embarrassment when he finds he has stumbled into mentioning his charity work. The hands clasped primly in his lap. The cardigan. (Mahogany-brown, possibly with some loose Werther's Originals clacking together in the pockets.)

We meet in a London hotel suite where he has been installed on a sofa for the day to talk about David Fincher's frosty, glossy new version of The Girl with the Dragon Tattoo. Craig makes a cheerfully bumbling Mikael Blomkvist, the crusading Swedish journalist who teams up with an abrasive pixie-punk, Lisbeth Salander (Rooney Mara), to investigate a 40-year-old murder case. He carries some extra weight in the film, and works his way through a selection of Puffa jackets and chunky-knit pullovers that lend him the look of a catalogue model for the gentleman rambler.

He can talk about the character all you like: "He's normal. When someone shoots at him, he does what most of us would do: he runs away. The worst situation you can have in a thriller is a lead who looks like he can handle himself." And he will happily tell you how long he took to decide whether to make the film: "Steve [Zaillian] wrote a brilliant script. David wanted to direct it. It's, like, [shouts] 'Yes! When?'" Just don't ask him about acting. "I can't really tell you what I do. I know what I like in other actors: truth. That's the best. It makes you say, 'OK, I'll go with you on this.' That's the only thing I try to stick to. You've got to be selfish. You've got to defend your character and ask, 'Do I believe in this?'" Even this textbook admission appears to make him cringe a little. "I take my work seriously. On the other hand, you can slip very easily into wankerdom."

When he was offered the role of Bond six years ago, he had some understandable misgivings. Roger Michell, who directed Craig in The Mother and Enduring Love, remembers him asking for advice. "He was very ambivalent about taking it on. It's a life sentence, after all. I think he was initially excited by the work but also daunted by the attendant tap-dancing – the constant attention, the public speaking. He found that all pretty oppressive."

There were worries, too, that it would restrict other opportunities and lead to typecasting. Does Craig think audiences will accept him easily as Blomkvist? "Hopefully by the time people have got into the movie, they'll have forgotten Bond and can believe in me as someone else. That's all I set out to do. It was a struggle, as you can imagine, because obviously you can see how cool I am." It's a self-deprecating remark, but I'm not sure exactly which part of him is being deprecated (the cardigan?). We both chuckle anyway, as if it's crushingly obvious what a total dork he is.

Rather encouragingly, Craig's elevation to superstardom has done nothing to limit his range. In the first stage of his film career, he pinballed from playing Francis Bacon's sadomasochistic boyfriend in Love Is the Devil to Lara Croft's rival in the first Tomb Raider film, from Ted Hughes in Sylvia to brutes of a different stripe in Spielberg's Munich and the Brit gangster thriller Layer Cake. Since slipping into Bond's tuxedo, he has been no less eclectic, starring in dramas high-fibre (Defiance) and offbeat (Flashbacks of a Fool), as well as blockbusters (The Adventures of Tintin), schlock (Dream House, on which he fell for his co-star, and now wife, Rachel Weisz) and the odd folly (Cowboys and Aliens, described by its own studio head as "mediocre" and "not good enough").

Michell believes the actor's strength comes from having put in the donkeywork – studying at the Guildhall drama school in London before moving into theatre and television. "He was an actor before he was a film star. He learned his craft long before being thrust into the public eye. That's getting rarer these days. And he's a character actor as well as being a leading man, which is another weird thing. You don't often find those aspects together. From Cary Grant onwards, most film stars are wonderful at being versions of themselves. Dan has other skills. He's full of paradoxes: gentleness and violence, kindness and madness. He has this visible warmth, but beating away inside you can feel these madman's drums; you can sense he's on the boil."

Craig had not yet been cast as Bond when Martin Campbell was hired to direct Casino Royale. "Oddly enough, I wasn't sure about Daniel at first," Campbell says. "My vision of the character was steeped in that handsome, Sean Connery/Pierce Brosnan image. Daniel's good-looking in a more rugged way. I tested other actors for the part, but [producer] Barbara Broccoli had no doubt at all that Daniel would make a terrific Bond. She was the one really pushing for him." It was Craig's performance as a drug dealer in Layer Cake that persuaded Campbell. "He has a charm in that movie, a sense of mischief, that convinced me he could be Bond."

Whereas Bond movies once hinged on gadgets and weaponry, there was no call for such frivolity once the part was inhabited by an actor who himself resembled some kind of blunt instrument, a cosh or a club. Weirdly, Craig is at his least threatening when he is brandishing a gun; his body is all the hardware he needs. His arrival heralded an entire shift of tone for the Bond series, a daredevil plunge into the dour and the gritty, and it seems laughable now that much of the media derided his appointment. "The press complained because he was blond, and said he looked like Vladimir Putin," Campbell recalls. "I asked Daniel, 'Do you listen to all this crap?' He said, 'Yeah. What I do is I make sure I've seen it all and that everyone on set knows what's been in the press, then there's nothing to hide.' I thought that was a very perceptive way of dealing with it."

Even if the role is still as much albatross as icon, Craig denies he chooses films based on how they will play through the prism of Bond. "I'm genuinely not aware of it. I probably was when Casino Royale came out; I'm sure there was a point when I thought [squeals] 'Fucking hell! What now?' But I don't think, 'This will look good next to that …' If that's what you do, you're inhibiting yourself against instinct, which is just … wrong."

So there's nothing in his contract to say he has to run his other film choices past Broccoli first? "No. It's not even an issue." Could he play, say, a child-killer between Bond films if he wanted to? "'Course I could. Whether I'd want to is another matter. I think it would smack slightly of, you know, 'Oh, he's only doing that to get away from Bond.' I've got no desire to escape the role. I love playing Bond – it's fantastic."

That said, it wasn't long ago that Craig was considering deserting the series after only two films. MGM, the studio that owns the franchise, was in severe financial trouble; it filed for bankruptcy last year, leaving Bond in limbo. "There was that long hiatus where Bond maybe wasn't happening," Craig recalls. "I'd got it into my head that if it went another two years on top of the two-year gap we'd already had, then they should probably find someone else. And I should think about getting on with things."

Fortunately, MGM came out the other side, and Skyfall was announced earlier this year with Sam Mendes, who worked with Craig on Road to Perdition, as director. "Who knows what the result's going to be?" Craig shrugs. "I think it will be fairly spectacular. I get paid a lot of money to do something I love to do, and whatever it is – the way I was brought up, or whatever – I feel if you're getting paid you should put the work in. Maybe I'm stupid and everyone's looking at me and saying: 'Chill out, take the money and run.' I can't do that. I feel the more we put into it, the more we'll get out. How best can we spend all this money? You don't just take it and go, 'Yay! See ya!' I want millions of people to watch the movie. So why not make it good?"

Evidently, he is still sore from the frustrating experience of making Quantum of Solace. "We were hamstrung by the writers' strike. We had half a script and lots of pressure. We suffered because of a lack of preparation. That doesn't necessarily mean that Skyfall is going to be better – I don't want to jinx it – but I can say we've worked solidly on this script for two years. Sam's involvement has brought in people like Ralph [Fiennes] and Javier [Bardem]. He's a very visual director, and I think audiences want something visually beautiful in a Bond movie. Also, we got rid of a lot of the old characters in Casino Royale, the ones that had been set in stone. That's just the way it happened, and I think now we can start reintroducing them." It was revealed last month that Ben Whishaw will play Q, while there is speculation that Moneypenny will return in the near future.

"Before we started, Sam and I sat down together and rubbed our hands and said, 'Right – what shall we do?' We watched the films, we read the books again, just to find what makes a great Bond movie. And I think we've managed to put in all the wit we love about the series, and all the kind of …" He stops short. "Look, I'm really very excited about it." Then he admonishes himself ("Shut up!") and offers me some advice on how to wrap up the article. "Just write, 'He waffled on for fucking hours …'" And now I have.