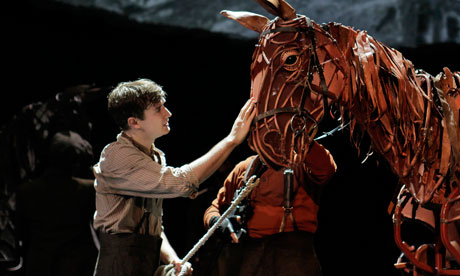 The success of the play and the release of the film have given the charity a leg up. Photograph: Paul Kolnik/ASSOCIATED PRESS

A charity begun 80 years ago by a young brigadier's wife who was appalled by the condition of discarded British war horses has leapt to international prominence since the success of Michael Morpurgo's book War Horse, the basis of the acclaimed play now retold by Steven Spielberg in a new film.

The Brooke Trust, founded in Egypt by Dorothy "Dodo" Brooke, is supported by Morpurgo and its trustees hope that interest in the film, released in January and starring Benedict Cumberbatch and Emily Watson, will allow it to continue to look after working horses, mules and donkeys across the world, in spite of political and economic instability.

"We've had more inquiries, especially from the public, who are moved by the story of the real war horses," said Kirsty Whitelock of the trust. "The book and show have already opened the Brooke up to new audiences."

The charity, which still runs the Old War Horse Memorial Hospital in Cairo, but now works in Africa, Asia and Latin America, has helped to put together an exhibition, War Horse: Fact & Fiction, currently at the National Army Museum in London.

The fortunes of horses that were requisitioned from fields all over Britain in 1914 and deployed in combat during first world war were the inspiration for Morpurgo's story and led to the genesis of the trust in October 1930.

When Brooke arrived in Cairo as a young bride with her husband, cavalry officer Brigadier Geoffrey Brooke, she was shocked to find the city's streets full of skeletal former farm horses from England. It is thought that 20,000 horses belonging to the British, Australian and US forces were sold into a life of hard labour in Egypt alone. Brooke sent a passionate letter to the Morning Post, setting out her plans to help their plight.

"Out here, in Egypt, there are still many hundreds of old army horses sold of necessity at the cessation of the war," she wrote. "They are all over 20 years of age by now, and to say that the majority of them have fallen on hard times is to express it very mildly."

The horses were sold into drudgery, she explained. "These old horses were, many of them, born and bred in the green fields of England – how many years since they have seen a field, heard a stream of water or a kind word in English?"

She ended her public appeal with a call for funds to be sent out to Egypt so she could buy back some of the horses and treat them. The public were so moved they sent her the equivalent of £20,000 in today's money. By 1934, the Memorial Hospital had been founded and Brooke had rescued 5,000 ex-war horses in Egypt.

"Happiness comes like a dream of the past to these old horses when we buy them," she wrote in her diary in 1932. "They cock their ears at an English voice, they even whinny with the old familiar smell of bran mash. Some few, who still possess the physical energy, roll in ecstasy when they find themselves on a soft straw bed."

Dorothy Gibson-Craig was born into an aristocratic family in Melrose, Scotland, in 1884 and she spent a peaceful childhood in Scotland and England, becoming an accomplished horsewoman and developing a love for animals. She continued to work in her charity until her death in 1955, when she was buried in her adopted home of Cairo. Her mission in Egypt survived the Suez crisis in 1956 and aided Egyptian horses, donkeys and mules harmed during the 2011 revolution. Family members are still involved with the charity, of which the Duchess of Cornwall is now president, and it has become a worldwide animal welfare organisation, delivering veterinary and community programmes to some of the estimated 100 million equine animals working in the developing world.

Over the past year, the Brooke has helped 900,000 animals, aid which it believes has benefited more than 5 million people. 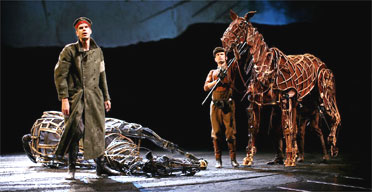 The National has dramatically raised the stakes when it comes to shows for the over-12s. After His Dark Materials and Coram Boy, they bring us Nick Stafford's adaptation of Michael Morpurgo's novel about the bond between boy and horse. And, if the story steers perilously close to sentimentality, there is no denying the visual bravura of the puppet-driven production by Marianne Elliott and Tom Morris.

The originality of Morpurgo's book lies in the fact that we get a horse's-eye-view of the unfolding action. Joey, the equine protagonist, recounts how he was nurtured by Devonian Albert, sold to the cavalry at the outbreak of the first world war, and pursued across the scarred battlefields of France by his newly enlisted protector. Inevitably, in Stafford's play we view the action objectively and become more aware of the story's artful contrivances: it seems excessively fortuitous that Joey, captured by the enemy, falls into the caring hands of a German captain as horse-obsessed as Albert . And when the rescued Joey in 1918 is saved from slaughter only by a jammed pistol it seems providence is working overtime.

But the narrative failings are overcome by the brilliant work of the Handspring Puppet Company, who give Joey, his companion Topthorn, and a bevy of steeds an articulated life. Each horse is operated by three people, one controlling the neighing, whinnying, intelligently reacting head. We also see Joey magically transformed from a peacetime colt reduced to the drudgery of pulling a ploughshare, into a bucking, rearing animal equipped for cavalry action. Even Equus, in which horses were represented by skeletally masked actors, pales in comparison with the dazzling puppet design of Basil Jones and Adrian Kohler who ultimately make you forget you are watching fabricated quadrupeds.

Elliott and Morris recreate the kaleidoscopic horror of war through bold imagery, including the remorseless advance of a manually-operated tank, and through the line-drawings of Rae Smith projected on to a suspended screen. Admittedly the performers are somewhat eclipsed by the action, but Luke Treadaway as the tenacious Albert and Angus Wright as the sympathetic captain make their mark.

The joy of the evening, however, lies in the skilled recreation of equine life and in its unshaken belief that mankind is ennobled by its love of the horse. 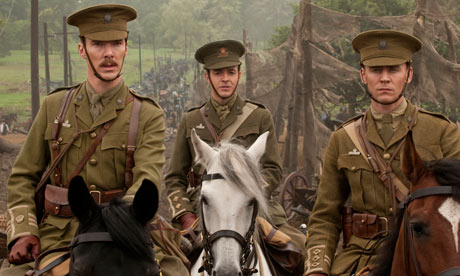 Steven Spielberg has done his bit to shape western attitudes to warfare. Saving Private Ryan burnished the myth of heroic conflict when cinema had lost faith in it. Schindler's List re-established the useful notion of the indisputably evil foe. In the films of the 40s and 50s, our boys socked it to the Nazis time and again to audiences' innocent delight. However, Vietnam swept away the simplicities of battlefield bravado. When Hollywood got round to confronting that ill-fated undertaking, it found little to glorify. Instead it homed in on the horror, the horror.

Films like Apocalypse Now, Full Metal Jacket and Casualties of War fed public disgust with militarism. America, it was said, would never again put boots on the ground in conflict, but would turn its back on foreign entanglements as its founders had intended. Then, in the 1990s, Spielberg's two Oscar winners rediscovered the cheering certainties of the second world war.

In doing so, they reasserted the notion that war could be both epic and just. Soon, the likes of Pearl Harbor, Enemy at the Gates, The Great Raid and even Inglourious Basterds were inspiring a new generation with the nobility of 1940s derring-do. Television offered a similar perspective, not least with Spielberg's own Band of Brothers.

This screen resurrection of the crusade against the Axis powers may have played its part in the renewal of western bellicosity during the noughties. Giving Saddam Hussein 48 hours to leave Iraq in 2003, George W Bush couched his justification thus: "In the 20th century, some chose to appease murderous dictators, whose threats were allowed to grow into genocide and global war. In this century, when evil men plot chemical, biological and nuclear terror, a policy of appeasement could bring destruction of a kind never before seen on this earth."

War films in that decade succeeded in retaining an upbeat tone in spite of the complexities of the period's conflicts. Black Hawk Down lamented a mistaken but high-minded intervention and celebrated military courage and camaraderie. Behind Enemy Lines and Tears of the Sun found scope for heroism in unorthodox conflicts. The Hurt Locker even managed to turn the Iraq war into a theatre of honour.

Now however, Spielberg has (literally) returned to the fray by stamping our own decade with a new evocation of combat. War Horse's battle scenes rival those of Saving Private Ryan in impact; yet they exude an entirely different scent. In Britain the spectre of the first world war, with its trenches, mud, gas, poets and Christmas truce, has never left us. In America it never cast such a spell. Lured into its ambit by the tale of a boy's love for a horse, Spielberg encountered a typically English take on the conflict's futility.

Nonetheless, it was up to him to make of it what he would. His response could hardly have been more emphatic. Like Lewis Milestone adapting Erich Maria Remarque's All Quiet on the Western Front in 1930, he's delivered an overpoweringly pacifist sermon. In place of the fiendish Nazis of Schindler's List, we have Germans who are nicer and wiser than their British enemies. The main protagonist, drawn from a species with more sense than to launch wars, mocks conflict by fighting for both sides. These hostilities yield no heroes, only fools and victims. Deserters are admired; their punishment is an outrage. Americans, who staged the D-Day landings unaided in Saving Private Ryan, might have turned up at the end to save the day. Instead, they're wholly absent. This time war is a pursuit fit only for benighted Europeans.

On the release of Milestone's film, which went on to win two Oscars, Variety wrote: "The League of Nations could make no better investment than to buy up the master-print, reproduce it in every language, to be shown in all the nations until the word 'war' is taken out of the dictionaries." The film was re-released in 1939 as a warning to the world. It may well have fuelled American reluctance to be dragged into the gathering storm.

Today War Horse makes its pitch at a time when its message will also fall on welcoming ears. The western world is sick of its current conflicts, and wants to bring its boys home. Defence budgets are being cut. Obama chose to leave Libya to Europe. Iran seems likely to be left to Israel. Once again, television is backing up the Spielberg message, with Downton Abbey, Birdsong and a forthcoming Ford Madox Ford adaptation all raising awareness of the great war and its pointlessness. Doubtless the west's thirst for bloodshed will in due course reassert itself. Still, Joey's adventure may have helped put off that day.