Re: Calling all Englishmen 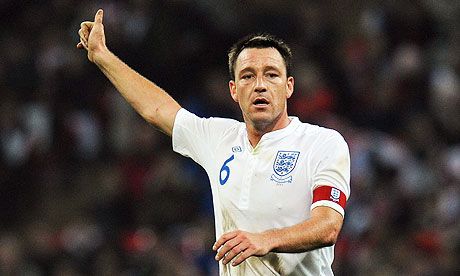 John Terry wears the captain's armband while playing for England against Sweden in a friendly last November. Photograph: Andy Rain/EPA

John Terry has been stripped of the England captaincy by the Football Association's chairman, David Bernstein. The defender was informed of the decision by Bernstein in a phone call on Friday morning. It is the second time that he has lost the captaincy for off-the-pitch reasons.

"Following the decision to adjourn the court case against John Terry to July, the Football Association confirm he will not captain the England team until the allegations against him are resolved," the FA said in a statement.

"The FA board expected the trial to be concluded prior to the European Championships. Further to Wednesday's confirmation that the trial will not take place until after the tournament, the board has discussed the matter in detail and has collectively decided it is in the interests of all parties that John has the responsibilities of captaincy removed at this time.

"This decision has been taken due to the higher profile nature of the England captaincy, on and off the pitch, and the additional demands and requirements expected of the captain leading into and during a tournament.

"The FA board can confirm that he has not been excluded from the squad and that [the England manager] Fabio Capello is free to select him for the Holland [friendly] fixture on 29 February and the European Championships.

"FA chairman David Bernstein has spoken to both John Terry and Fabio Capello to explain the facts to them. Fabio Capello has not been involved in The FA board discussions which reached this conclusion, but understands that The FA board has authority to make this decision. Fabio Capello will take the decision as to who will be made captain moving forward.

"This decision in no way infers any suggestion of guilt in relation to the charge made against John Terry. The FA will be not be making any further comment on this matter."

The decision was made by Bernstein after discussion with the other members of the FA's 14-strong board on Thursday. Terry himself is not expected to responded to the news immediately.

It was announced on Wednesday that Terry's trial for racially abusing the Queens Park Rangers defender Anton Ferdinand during a Premier League game played last October had been scheduled for 9 July. This left the Chelsea centre-back free to represent and possibly captain his country at Euro 2012, which ends a week earlier.

But anti-racism campaigners were among those who insisted that a footballer should not lead his country while facing charges of such magnitude. "The seriousness of the allegations mean that he can't lead the nation," said Piara Powar, executive director of Football Against Racism in Europe. "The FA must do the right thing."

Capello is out of the country and due to return to watch a Premier League game on Saturday. He had selected Terry for the matches against Spain and Sweden last November despite the allegations, after consulting senior figures at the FA including Bernstein. "We need to wait what will happen about the FA investigation and the police investigation, but I can tell you he is innocent until proven guilty," the Italian said at the time. "This is a really important thing for me and the FA."

Shortly after the news of Terry's enforced demotion broke Arsène Wenger insisted that the manager should have the final say over the identity of his captain. "I don't know well this case, I just think it's the manager who names the captain," the Arsenal manager said. "It is a very difficult position [for Fabio Capello] to be in but the manager has some responsibilities that should be left to him."

Terry has consistently denied racially abusing Ferdinand. "I will fight tooth and nail to prove my innocence," he said when the criminal charge was announced in December. "I have campaigned against racism and believe there is no place for it in society." Terry's barrister on Wednesday entered a formal not guilty plea at Westminster magistrates court.

It is the second time that Terry has been stripped of the England captaincy, the previous occasion coming in 2010 after intense speculation about the player's private life.

Sports minister Hugh Robertson backed the FA's decision saying it would have been "impossible" for Terry, who will miss Chelsea's Barclays Premier League game against Manchester United on Sunday with the knee problem, to continue.

Robertson said: "I completely support the FA's decision. It would have been impossible for John Terry to have continued as captain with this charge over his head."