On the first ascent of the notoriously difficult Alpine peak in 1865 four members of Edward Whymper's expedition fell to their deaths:

Ascent of the Matterhorn by Gustave Dore.

The Matterhorn Tragedy by Gustave Dore.

On that same expedition there appeared in the skies above the Matterhorn an apparition which, in an age of Belief, many interpreted as a divine Christian symbol: 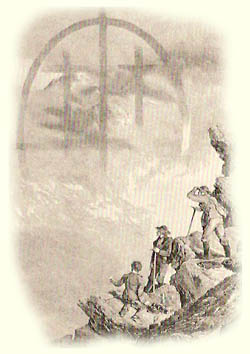 Fog bow and Brocken Spectre above the Matterhorn (see below).

A fog bow is a similar phenomenon to a rainbow, however, as its name suggests, it appears as a bow in fog rather than rain. Because of the very small size of water droplets that cause fog—smaller than 0.05 millimetres (0.0020 in)—the fog bow has only very weak colors, with a red outer edge and bluish inner.

In many cases when the droplets are very small, fog bows appear white, and are therefore sometimes called white rainbows. This lack of color is a distinguishing feature from a glory, which has multiple pale colored rings caused by diffraction. When the droplets forming it are almost all of the same size the fog bow can have multiple inner rings, or supernumeraries, that are more strongly colored than the main bow. NASA state that:

The fogbow's lack of colors is caused by the smaller water drops ... so small that the wavelength of light becomes important. Diffraction smears out colors that would be created by larger rainbow water drops.

A Brocken spectre (German Brockengespenst), also called Brocken bow or mountain spectre is the apparently enormous and magnified shadow of an observer, cast upon the upper surfaces of clouds opposite the sun. The phenomenon can appear on any misty mountainside or cloud bank, or even from an aeroplane, but the frequent fogs and low-altitude accessibility of the Brocken, a peak in the Harz Mountains in Germany, have created a local legend from which the phenomenon draws its name. The Brocken spectre was observed and described by Johann Silberschlag in 1780, and has since been recorded often in literature about the region. However it can be seen in any mountain region.

Night Brocken Spectre created by high lights of a car.

Brocken spectre. This is not actually on Brocken, but was taken in the Tanzawa Mountains in Japan; despite the name, the phenomenon is not unique to Brocken and can occur in any misty mountain region.