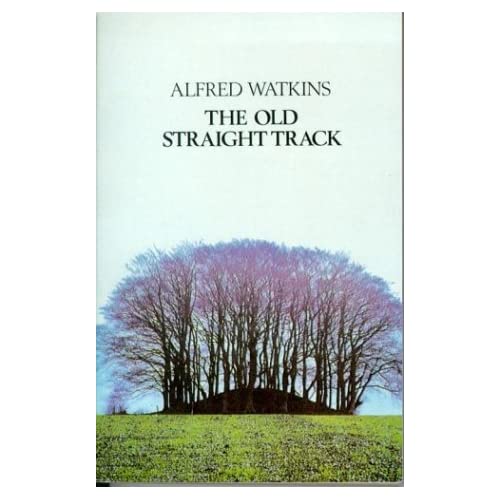 The Old Straight Track: Its Mounds, Beacons, Moats, Sites and Mark Stones is a book by Alfred Watkins, first published in 1925, describing ley lines in Britain.

Watkins presents a methodical and thorough exposition of his theories of ley lines, following an earlier much shorter publication, "Early British Trackways" (1922). The book has a preface, thirty chapters, four appendices and an index. There are many figures, and photographs taken by the author.

A SHORT HISTORY OF LEY HUNTING

As legend has it, the Herefordshire businessman Alfred Watkins was sitting in his car one summer afternoon during a visit to Blackwardine in Herefordshire. In 1921 he happened to consult a local map and noticed that a number of prehistoric and other ancient sites in the area fell into alignments. Subsequent field and map work convinced him that this pattern was indeed a real one. Watkins came to the conclusion that he was seeing the vestigial traces of old straight tracks laid down in the Neolithic era, probably, he surmised, for traders' routes. He concluded that after modernisation in the later Bronze and Iron Age periods the tracks had fallen into disuse during the early historical period. The pattern had been accidentally preserved here and there due to the Christianisation of certain pagan sites which were markers along the old straight tracks. He published these theories in two books.

Reaction to Watkins' book The old straight track were sharply divided. Many thought he had uncovered a long-forgotten secret within the landscape and The Straight Track Club was formed to carry out further "ley hunting", while orthodox archaeologists vehemently dismissed the whole notion. And with a few notable exceptions this situation still pertains today.

In the 1960s an ex-RAF pilot, Tony Wedd, a man with a deep interest in the UFO phenomenon made a spurious connection between "orthotenies" (alignments of UFO sightings in France, first brought to public attention by Aime Michel and discussed in his book Flying saucers and the straight line mystery) and Alfred Watkins' "leys". He made a great impression on two local lads, Philip Heselton and Jimmy Goddard who revived the Straight Track Club in the form of the Ley Hunter's Club and started a magazine called The Ley Hunter. Within ten years this rekindled interest in leys grew into a whole network of interconnecting ideas and research that came to be known as "earth mysteries".

One particular notion which has complicated much research into this area of human behaviour and made it impossible for academe to take the ley hypothesis seriously has been the idea of "energy lines". The idea that leys could be lines of terrestrial energy linking ancient sites of cosmic power derived originally from The goat-foot god, a novel by Dion Fortune written in the 1930s. These kinds of concepts linking life-energies with the suggestion of place related energies revealed in folklore gained ground in the late 1960s, no doubt fuelled by the general search for spirituality and meaning in the modern world then manifesting itself in the drug and counter-culture, art, eastern mysticism, vegetarianism and rock 'n' roll. A milestone in the publishing world was John Michell's The view over Atlantis which synthesised many of the current ideas on leys, folklore, mythology and landscape. By the 1970s self-styled dowsers or water diviners had seized the nettle and were claiming that leys could be dowsed on the ground (and on the map!) and that ancient prehistoric sites were places of power situated at node points on a great global grid of spiritual energy. Most of this belief is not grounded in fact.

In the late 1970s, Paul Devereux, then editor of The Ley Hunter, instigated the Dragon Project, a volunteer effort set up to examine whether there was any truth in the claims of dowsers and others that ancient sites were the source or repository of exotic energies so far unrecognised by orthodox science. To this end they set up home base at the Rollright stone circle in Oxfordshire and employed all manner of scientific gadgetry, photographers, dowsers, psychics and sensitives to track down the elusive "earth energy". After nearly ten years of hard work, in often unpleasant conditions the Dragon Project (which moved operations to other sites all over the UK during this period) came to the conclusion was that there were no strange energies at these places, but there were strange anomalous effects in known energies. There was certainly no hard evidence for "ley energies" and successful dowsing for such energies was elusive.

During this period many examples of straight tracks from around the world came to the notice of ley hunters. In particular there were the Native American Indian trails in the sierra regions of California, Bolivian lines marked with later Christian shrines and churches, the dead straight tracks of the Anasazi radiating from Chaco Canyon in New Mexico, the Mayan "sacbeob"... the list continues. Watkins, it seems, had been vindicated in the face of continuing hostility from orthodox archaeology. Even in Britain, the archaeologists were discovering "terrain oblivious lines" in the layout of ancient boundaries or "reaves" on Dartmoor.

Recent research has started to reveal some of the real meaning behind ancient man's apparent obsession with linearity. Nobody knows for sure, but it seems that earlier peoples considered that straight landscape lines to facilitate the passage of spirits. Research by Paul Devereux and Nigel Pennick has revealed that a history of the straight landscape line can be seen in which it moved from being a sacred or magical thing into the secular sphere. Leys, old straight tracks and "terrain oblivious lines" or whatever you want to call them, reveal a deep mystery lodged as much in the human psyche as in the landscape. Current research is revealing more and more examples of linear trackways, roads, paths and mythological routes which are connected to the dead, spirits of the dead and spirit travel.

This problem with all this- attractive though the idea sounds- is statistical.

If you draw enough random marks on a sheet of paper and place a ruler on it, the chances are that several of those points are going to appear as a straight line.

The Nazca desert drawings are probably the largest and best known of their kind in the world. Their original function is still only guessed at.

The Nazca valley is a strip of level desert ground 37 miles long and a mile wide. The enormous drawings were made by removing the dark purple granite pebbles which cover the floor, and exposing the light yellow sand beneath. The drawings were first confirmed when commercial airlines began flights over the Andes.

They are clear enough to be viewed by astronauts aboard Skylab, orbiting 270 miles above Earth.