Decades after revolutionising the music world, his Chronicles did a very similar service for pop autobiographies 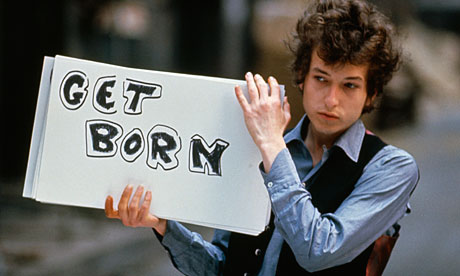 Bob Dylan makes some early notes for his memoirs in 1965 (on the set of the film for Subterranean Homesick Blues). Photograph: Tony Frank/Sygma/Corbis

In looking at Bob Dylan's contribution to the field of literature, let's do the old boy a birthday kindness and discretely pass over the hubristic folly that was Tarantula, and instead focus on his triumphant 2004 memoir, Chronicles Volume One. So successful was Chronicles that it's possible to argue that through it, Dylan once again exerted his preternatural influence over a whole slew of music-biz types, and can be held indirectly responsible for Alex James's A Bit of a Blur, Pearl Lowe's All That Glitters, Mark E Smith's Renegade, Dean Wareham's Black Postcards, Luke Haines's Bad Vibes, Peter Hook's The Hacienda, Carl Barrat's Threepenny Memoir, Tony McCarroll's Oasis, Patti Smith's Just Kids, and Suze Rotolo's A Freewheelin' Time.

Of the above memoirists, arguably only Mark E Smith comes close to Dylan when it comes to being a bona fide genius (not a term to be flung about lightly); like Dylan, he has an appeal that can be partly attributed to an enigmatic personality. But it is Dylan (feted as a poet and spokesman for a generation, etc etc) – who surely had the most to lose had he written a below-par memoir. Thankfully, Dylan strikes the right balance between candid detail ("she was the most erotic thing I'd ever seen") and gnomic observation ("Things were too big to see all at once, like all the books in the library – everything laying around on all the tables") which both nurtures and protects The Legend. Sadly, the same cannot be said of Mark E Smith's Renegade, which reads like a man starting to believe his own press and turning into a caricature in the process. Despite the odd flash of caustic wit ("I hope this book turns out like Mein Kampf for the Hollyoaks generation"), it is poorly-written and a sad waste of a brilliant opportunity.

Also worthy of note is Patti Smith's Just Kids. This is the memoir that most closely aligns itself with Dylan's: both are portraits of the artists as young hustlers trying to make it in New York City. But Just Kids doesn't come close to the warmth, humour and genuine sense of revelation that makes Chronicles such a delight. The titles themselves are telling: the faux-modesty of Just Kids grates, while Chronicles Volume One can be interpreted either as self-aggrandisement or mock-gravitas – and is probably a bit of both.

Smith's and Dylan's different approaches to their influences are also interesting – especially as these often overlap. Throughout Just Kids a po-faced Smith namedrops furiously but, as when she tells us "Sometimes during lunch break at Scribner's, I would go to St Patrick's to visit the young St Stanislaus. I would pray for the dead, whom I seemed to love as much as the living: Rimbaud, Seurat, Camille Claudel, and the mistress of Jules Laforgue", there is little sense of enthusiasm, or of what these people mean to her.

In contrast, Dylan devotes pages to his reading and listening habits. He offers tantalising clues to how certain artists informed his world view and influenced his own writing and identity. His enthusiasm is infectious:

"Robert Johnson's code of language was like nothing I'd heard before or since. To go with all of that, someplace along the line Suze [Rotolo] had also introduced me to the poetry of French Symbolist poet Arthur Rimbaud. That was a big deal, too. I came across one of his letters called "Je est un autre", which translates into "I is someone else." When I read those words the bells went off. It made perfect sense. I wished someone would have mentioned that to me earlier. It went right along with Johnson's dark night of the soul and Woody [Guthrie]'s hopped-up union meeting sermons …"

Here, Dylan's modesty and generosity are touching, but, to me, what most impresses is the way he uses these moments to lull the reader into a false sense of security before casually dropping a comment that cuts through the good-natured humour and lets the reader know in no uncertain terms that Dylan is fully aware of his genius and that there is a calm, cold-eyed ambition at work:

"In the world news, Picasso at seventy-nine years old had just married his thirty-five-year-old model. Wow. Picasso wasn't just loafing about on crowded sidewalks. Life hadn't flowed past him yet. Picasso had fractured the art world and cracked it wide open. He was revolutionary. I wanted to be like that."

Which seems like a good place to leave Bob on his 70th birthday - one ageing genius gazing admiringly upon another – and ask, which other musical memoirs are worthy of note? Or are these books merely indicative of society's obsession with celebrity: missives from the Where-Are-They-Now? file; something to be knocked out between the financially lucrative comeback gig and the lazy nostalgia of playing a "seminal" album in its entirety? For now though, I'm just glad we have Chronicles Volume One. If Volume Two does ever appear, it's certainly got a hard act to follow.

Re: Chronicles Vol I

Chronicles gives me the same thrill as when first seeing the liner notes to World Gone Wrong. How did we ever doubt him ? Every paragraph, every line, is written with the same poetic sensibility Bob brings to his lyrics.

And it is so like seeing him in concert today - the different periods of his career synthesized into a single view.