all across the universe :: General :: Presentations

Great to see everyone again!

I've changed my name from Dharma Wheel to my first name, Constance.

My enthusiasm for Buddhism has waned.

All that stuff about all life is suffering...the only real thing is impermanence...was starting to get me down.

Christianity as a philosophy or belief system (not as a religion or faith) is much more appealing to me as it has as it's foundation the notion that Love is what "moves the sun and all the stars" as Dante put it.

And I never really believed in reincarnation. But I do subscribe to the idea that all matter comes back as particles of new life.

As Whitman put it, "If you want me again, look for me under your footsoles."

Thank you SJ for arranging the new site.

And thank you Catherine for all your efforts.

Now we just need Eddie back here for my happiness to be complete.

But isn't Christianity at least as much about life-as-suffering as Buddhism?

Yes, I agree that Christianity is as much about suffering as Buddhism. I believe that and I'm glad you brought it up. The difference as I understand it is that Buddhism offers a release from suffering through nirvana, a breaking free from attachment, through which the individual dissolves into nothingness. Christianity also offers a release from suffering but that release is only made possible through love and sacrifice.

I don't buy Christianity's belief in the soul and an afterlife. But I see that value is placed on the concept of suffering in that suffering gives the individual an empathy into the suffering of others. I don't know how that comes about, but I believe it happens. I like the idea of Christ's suffering as being a "suffering with" mortals and that in his empathetic suffering He demonstrates love for mankind. I also like the Christian idea that sacrifice has meaning and is not just a waste. Sacrifice has meaning when it results in the good of others. I'm not sure how that comes about either, but I believe that happens, too. Joseph Campbell gave an example of this kind of suffering when he described how a mother bird gets banged up and exhausted when she feeds her baby birds. Attachment brings suffering as it does in Buddhism, but in Christianity, the attachment--the attachment being Love--is celebrated while at the same time it is acknowledged as a source of suffering and sacrifice. The lover sacrifices for the beloved. The best description of this for me is Keats' Ode on Melancholy. The lover feels sadness in love because he knows that his lover must die. He willingly undertakes the suffering of love:

NO, no, go not to Lethe, neither twist
Wolfs-bane, tight-rooted, for its poisonous wine;
Nor suffer thy pale forehead to be kiss’d
By nightshade, ruby grape of Proserpine;
Make not your rosary of yew-berries, 5
Nor let the beetle, nor the death-moth be
Your mournful Psyche, nor the downy owl
A partner in your sorrow’s mysteries;
For shade to shade will come too drowsily,
And drown the wakeful anguish of the soul. 10

But when the melancholy fit shall fall
Sudden from heaven like a weeping cloud,
That fosters the droop-headed flowers all,
And hides the green hill in an April shroud;
Then glut thy sorrow on a morning rose, 15
Or on the rainbow of the salt sand-wave,
Or on the wealth of globed peonies;
Or if thy mistress some rich anger shows,
Emprison her soft hand, and let her rave,
And feed deep, deep upon her peerless eyes. 20

She dwells with Beauty—Beauty that must die;
And Joy, whose hand is ever at his lips
Bidding adieu; and aching Pleasure nigh,
Turning to poison while the bee-mouth sips:
Ay, in the very temple of Delight 25
Veil’d Melancholy has her sovran shrine,
Though seen of none save him whose strenuous tongue
Can burst Joy’s grape against his palate fine;
His soul shall taste the sadness of her might,
And be among her cloudy trophies hung. 30

Do you know Joseph Campbell's books? Bill Moyers did a series of interviews with him called The Power of Myth which are available on VHS.

My new avatar is the Chinese character for love.

So glad you found us Constance

Hello Constance. Just wanted to say I enjoyed reading you're 7.12 pm post.
The poem took my breath away. Thanks for posting it (why don't you give it life in the poetry thread

)
I remember reading Campbell years ago...it was a long time ago...when I was interested in symbols and myths.
That's a very lovely avatar you've chosen.

Good to see you again, Constance.

blue moon wrote:Hello Constance. Just wanted to say I enjoyed reading you're 7.12 pm post.
The poem took my breath away. Thanks for posting it (why don't you give it life in the poetry thread

)
I remember reading Campbell years ago...it was a long time ago...when I was interested in symbols and myths.
That's a very lovely avater you've chosen.

Hi Blue Moon! So glad you liked the poem. Keats is my favorite poet.

I think you're right about nirvana. That concept is pretty horrible - to meditate in order not to feel anything anymore. I just think that this not the only concept Buddhism has about suffering and dealing with it. Just think of the idea of the Bodhisattva in Mahayana Buddhism - someone who is on the brink of nirvana and could just step out of the company of humans, but decides to stay and help - out of compassion: 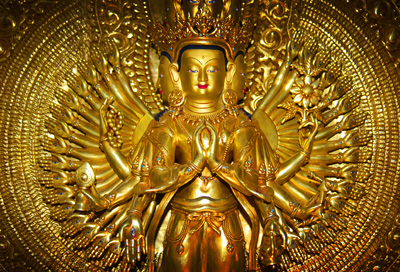 Like Avalokiteshvara with his thousand arms, and an eye in each hand to see where to help.

Shit, I'm starting to sound like a Buddhist missionary. I'm not, I wouldn't even call myself a Buddhist, but I think there are many dimensions to that religion.

And thanks for posting the Keats - one of the greatest of his poems!

You're right! The Bodhisattva--Kuan Yin--bypassing nirvana to help the suffering.

“Until the hells are empty,
I vow not to become a Buddha;
Only After all living beings are saved,
will I myself attain Bodhi”

I live near a major Buddhist center and I go there frequently with my family:

One of China's Immortals is Guanyin (Kuan Yin)...I visited shrines to her in China, because she protects people who work on the water. After seeing the name in your post I googled, and found this:

Guan-yin is shown standing on clouds or riding a dragon in front of a waterfall. As Guan-yin of the Southern Sea, she stands on a cliff in the midst of flaming waves and rescues shipwrecked persons from the sea...and here we are, misguided poor fools, thanking sj

sadly I can't find that image, but this one is nice:

Guan yin sails across the sea

I've seen statues of Kuan Yin where she's trampling a snake. Statues of Mary show her trampling a snake, too, to represent her redemption of the sin of Adam and Eve. As Joseph Campbell deliniates in his books, the similarities of religions--or I guess he'd call them mythologies--is startling.

I found a picture of it!

And here's Kuan Yin standing on a dragon:

there's an Egyptian goddess who holds aloft a snake...I'll google and get back...

I'm back...I found a Minoan snake goddess who is depicted holding snakes aloft and a Gaulish goddess (Serona) with a snake entwined on her arm. Rather than sin, these snakes represent healing (like the cadaceus).

Blue Moon, I'm going to start a thread where we can talk about China.

...I was thinking about starting one to talk about the snake

there's an Egyptian goddess who holds aloft a snake...I'll google and get back...

I'm back...I found a Minoan snake goddess who is depicted holding snakes aloft and a Gaulish goddess (Serona) with a snake entwined on her arm. Rather than sin, these snakes represent healing (like the cadaceus).

Did you find any pictures?

all across the universe :: General :: Presentations