Thread from the old ATU site on Polanski's Macbeth, one of the best-ever cinematic Shakespeare adaptations, I think:

Would Polanski's Chinatown have looked better in b/w? (Thread from the old ATU site):

But the question remains....

Material replicated below in the event of link expiry: Famously, this was Polanski's first major film project after the brutal murder of his pregnant wife Sharon Tate and his friends by Charles Manson's Family.

It's impossible not to make connections between the occultism of the witches and that of certain Family members; between the slaughter of Lady MacDuff's family and the violent nocturnal events at the Tate/LaBianca residences; between the explicit blood and gore of the film and real-life events.

Polanski wanted a younger-than-usual Macbeth/Lady Macbeth pairing (Jon Finch and Francesca Annis) because he felt that the frisson of sexuality lent credibility to the latter's encouragement of the former to regicidal violence. The film was financed by Playboy Magazine magnate Hugh Hefner, which might perhaps explain the nude sleep-walking scene.

The rain-drenched landscape of Snowdonia, North Wales stands in for Scotland and the Art Direction of the movie has a seemingly authentic 11th century feel about it.

Polanski took cinematically-justifiable liberties with Shakespeare's text, ruthlessly cutting it to a pared-down, economical film script. His most controversial addition comes at the pessimistic close when we see Donaldbain consulting the witches, suggesting that the cycle of regical violence will continue.

All in all, it adds up to one of the most effective screen adaptations of Shakespeare.

A significant departure from Shakespeare in the Polanski/Tynan screen adaptation is the elevation of the comparatively minor role of Ross in the original to a much more significant Machiavellian character who changes allegiances when it suits him.

Ross, indeed, becomes the mysterious figure of the Third Murderer (of Banquo)- whose identity has always been a matter of speculation amongst Shakespeare scholars.

Trivia fans will note the presence of soon-to-be cult children's TV presenter Keith Chegwin in the role of Fleance.

Music by the Third Ear Band. Remember them?

An anachrohronistic song by Geoffrey Chaucer is sung by a boy at one point at MacBeth's dining-table.

Our family tree includes Duncan and Malcolm so I have a deep interest in Macbeth.

That was an iPhone traducement of farrago, into Fargo.

The play's the thing!

In the hands of Roman Polanksi, the one-room chamber cinema of Carnage lives up to its name, says John Patterson. Spoiler alert! It all ends messily 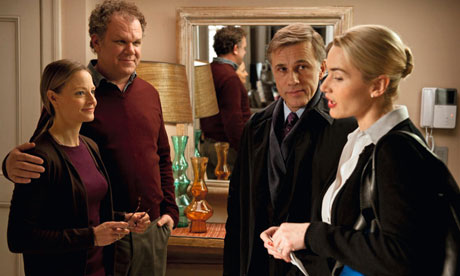 "Mmm … Francis Bacon?" says Kate Winslet to Jodie Foster, leafing through a coffee-table book devoted to the master of the cramped interior and the silent scream, "cruelty and splendour, chaos and balance …" Later she will vomit violently and at considerable length all over this same book but for now, she's offering a neat summary of the virtues of Roman Polanski's toothsomely claustrophobic Carnage, from Yasmina Reza's stage play.

One apartment – the film's entire set – holds two bourgeois New York couples meeting to discuss their sons, one of whom has knocked out the other's front teeth, and to effect some kind of settlement between the boys. Add Polanski to this toxic cocktail of passive-aggressive PC liberalism (Foster) v Darwinian corporate sharkiness (Christoph Waltz), clueless blue-collar schlubhood (John C Reilly) and screaming uptightness (Winslet), then settle in for a joyously unpleasant ride. The Bourgeois Proprieties don't survive the first half hour (of a very clipped 79 minutes – ah, brevity), and with the unhelpful addition of a bottle of scotch to an already volatile situation, all social inhibitions are soon abandoned. Loyalties fall apart, unlikely alliances form and abruptly dissolve (wives v husbands, men versus women, three on one), masks are torn off and violence is ever latent.

Just to watch actors of this quality tearing strips off each other is reason enough to see Carnage, but Polanski makes a deliberate commitment to the play's stage-bound properties – single set, single block of time – making this the least "opened-up" stage adaptation I've seen in ages. Polanski has returned again and again to claustrophobic or insular spaces: the yacht in Knife In The Water; the phantasmagoric apartments in Repulsion and The Tenant; the houses on islands in Cul-de-Sac and The Ghost; and the single set of Death And The Maiden. In the equally cramped Carnage, he's back to scorched-earth warfare waged indoors.

There is a touch of Buñuel's The Exterminating Angel here and also Claude Chabrol and his trained ethnographer's beady eye for insect-like behaviour as he surveys various strains of bourgeois depravity. But the abiding presence is of Polanski himself, a pure film-maker still working in the elemental ways he learned at the Lodz film school in the 1950s: image/sound/editing; nothing else matters (the only thing worth mourning about the Soviet Union: damn good film schools). As the first note of tension arises among the couples, an invisible dog starts barking somewhere far away, one of those characteristic tiny Polanski touches, like the backwards-shot seascapes in Bitter Moon, that disorient you just that little bit more, before he's ready to twist the knife again.

Cruelty, splendour, chaos and balance: four things that Roman Polanski knows all about.

Polanski's Carnage wrote:Polanski has returned again and again to claustrophobic or insular spaces: the yacht in Knife In The Water; the phantasmagoric apartments in Repulsion
...

There is a touch of Buñuel's The Exterminating Angel

from "Knife in The Water" I remember a baby crying and his mother ignoring him
from "Repulsion" I remember a lot of things... a piece of meat decomposing in Catherine Deneuve's bag, walls cracking, hands appearing from the wall, Catherine Deneuve being kissed with a strange look in her open eyes...
from Buñuel's "The exterminating Angel" I remember the plot... people who couldn't get out of a house and they don't know why while apparently there's nothing stopping them from going out. If my memory serves me well some of them even die.

Edit: I just realized my "Thanks Eddie... I'll see Carnage" sounds strange at the end of this post... I think I'll add an alien

I once read that Polanski recorded Repulsion in order to make money to record The Fearless Vampire Killers. Strange... I think the latter has a more commercial appeal (although I understand you need more money to record it).

I like both. But I think I prefer The Fearless Vampire Killers too

Polanski was cute in a funny way

... not as cute as Sharon Tate though
she's especially cute in the movie, red haired