^
Precautionary replication of the material above before the link to the old ATU cache expires:

I am stunned to learn that Suze Rotolo passed away on Friday. This item from the Expecting Rain bulletin board.


?The Village lost a life-long partisan and a true voice last Friday, with the passing of Susan Rotolo after a long illness, at home in her Noho loft and the arms of her husband of 40 years, Enzo Bartoccioli.

Suze Rotolo was a talented artist (the maker of artist books and delicate book-like objects), as well as an illustrator, a sometime activist, an erstwhile East Village Other slum goddess, a devoted wife, a proud mother, a poet's muse, a good comrade, and late in her too-short life, a published author. She was intensely private but as the radiant young woman on the cover of The Freewheelin' Bob Dylan, she became a legendary figure and even a generational icon. Just writing that I can hear her annoyed chortle--although she did humorously allow, after years of dodging rabid Dylanologists, that she was some sort of "artifact."

Growing up in Queens, a few years later than Suze and a few neighborhoods east of hers, I knew her name (although not how to correctly pronounce it) long before I met her, just a mom in the park. Our kids, Luca and Mara, went to the same Sullivan Street playgroup; our families were friendly, both in New York and on Cape Cod where, thanks to a network of her late parents' leftwing associates, she and Enzo always managed to find the most amazing Wellfleet Woods cabins or ocean-overlooking shacks.

Susan, as we called her, was intensely loyal. She retained many childhood friends, even while guarding her personal life. She was a woman of strong opinions and fierce standards (a demanding connoisseur of inexpensive table wine, a cook whose pasta was never less than perfect). She had no use for religion and deeply appreciated political theater--not just Brecht but the Billionaires for Bush, with whom she was affiliated during the 2004 election. She had a healthy sense of the absurd. She listened to jazz on WKCR and was delighted by her son's career as a musician and luthier. She thrived on spirited talk. (A sign pasted to her TV screen read "Conversation!") She was, to the very end, a person of enormous cheer.

In her memoir, unavoidably titled A Freewheelin' Time, Susan calls Dylan "the elephant in the room of my life" but the book (subtitled "A Memoir of Greenwich Village in the Sixties" and prefaced with a Village street map) is essentially about her youth--how it felt to be a working-class red-diaper baby, the child of Italian-born anti-fascists living in Sunnyside Gardens, a teenager in love at the epicenter of the folk revival, an art student in Italy, a tourist of the revolution in Cuba, an off-off Broadway stagehand. The story is hers and so is the voice (no ghost writing allowed). She signs off with the words "we had something to say, not something to sell." 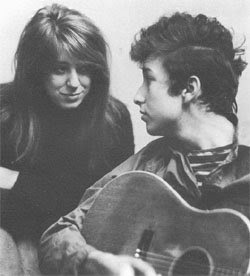 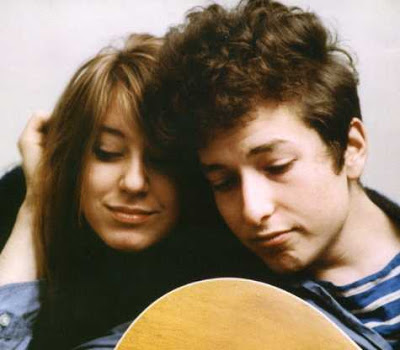 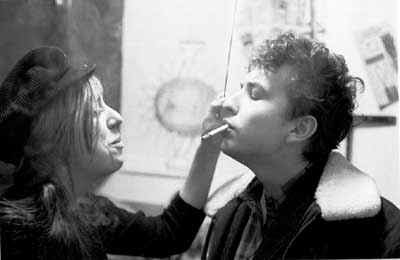 A generation is passing away.

Suze with "the elephant in the room of my life":

I don't recall the exact album on whose sleevenotes this hatred is recorded, but I'm sure somebody will know.

I don't recall the exact album on whose sleevenotes this hatred is recorded, but I'm sure somebody will know.


Eddie, someone quoted it yesterday on ER - and google reveals it was on Another Side Of - see http://www.bobdylanisis.com/Another_side_of_bob_dylan.htm

The reference to hating Enzo for making his beloved happy suggests that, yes indeed, it's the same bloke:

She was an absolutely beautiful appearance and from the small collection of fragments I've seen and read from her appears to have been an absolutely wonderfull person.

For what it's worth comming from an anonymous message board poster: my sincere condolescences to all those who grief her demise.

Thanks for the Enzo info Eddie & Felix, I had no idea.

INDEPENDENT review of Suze Rotolo's A Freewheelin' Time: A Memoir of Greenwich Village by Mark Marqusee

Suze Rotolo has waited a long time to tell her side of the Bob Dylan story. "My instinct was to protect my privacy, and consequently his." Despite her reticence, she has become a central figure in the Dylan legend, and for good reason. Rotolo was "Bob Dylan's girlfriend" from 1961 – when she was 17 and he 20 – until the relationship came to an end, after much procrastination on both sides, in early 1964. She was the young woman walking arm in arm with Dylan down a snowy Greenwich Village Street on the cover of Freewheelin', Dylan's breakthrough second album: unadorned, casual and cool.

During his period with Rotolo, Dylan found his voice as a song-writer. In its short span he created "Masters of War", "Blowin in the Wind", "A Hard Rain's a Gonna Fall", "Don't Think Twice, It's All Right", "Hattie Carroll" and many more, including the mournful "Boots of Spanish Leather", Dylan's response to Rotolo's leaving him (temporarily) to study in Perugia. During this time Dylan shot from Village folkie to national celebrity and commodity – a trauma from which he never fully recovered, as is clear from his own memoir, Chronicles, Volume One.

Rotolo was the daughter of working-class Italian Communists who gave her a sharpened political awareness along with an appreciation of art and music. Thanks to McCarthyism, the family led a pariah-like existence in Queens, New York. Within this separate world she discovered another hidden world, reading the ex-Stalinist anthology, The God That Failed, and learning about anti-Stalinist anarchist Carlo Tresca. Her father's death when she was 14 disrupted her childhood. She left Queens for the Village and the folk scene, where she met Dylan. Though not a musician, she seems to have had an amazing ear, revelling in the distinctive voices swirling through the Village hubbub.

The core of Rotolo's book, like Dylan's Chronicles, is a fond recreation of those precious years. Dylan's treatment is densely atmospheric and poetically rich, but Rotolo's is more reliable. It's a shame that at times her book reads a like thumbnail catalogue of contributors to the scene. She's generous, but sometimes banal. She is credited with introducing Dylan to Brecht, modernist painting, Surrealism, French Symbolism and avant-garde theatre. She was the more politically aware and active (and remains so). Rotolo has now fleshed out this picture.

She bridled at the girlfriend's role; she did not want to be "a string on Dylan's guitar". Even among the Village avant-garde, women were expected to applaud from the sidelines. Rotolo refers briefly to Dylan's "manipulativeness", but even after all these years, she's telling no tales. There are no intimate glimpses and no recriminations. She's still protecting her memories as she stresses Dylan's, and her own, ordinariness in extraordinary times.

Mike Marqusee is the author of 'Wicked Messenger: Bob Dylan and the 1960s' (Seven Stories Press)

d'yer remember the sardine and marmite toasted? or the crushed banana and teriyaki on ryvita? thems was the days innit.

The fried egg and bacon sarnie with HP Sauce; is there anywhere a better use for egg, bacon, bread and spicy condiments? (Hint: the answer is in the negatory ... )