Nearly 3,000 documents in Whitman's handwriting cast light on his experience as a government clerk 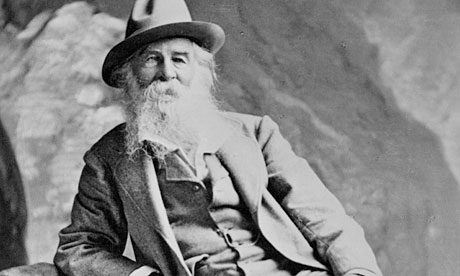 A "huge trove" of documents written by Walt Whitman while the American poet worked for the government as a clerk has been unearthed by a scholar.

Kenneth Price, a professor of American literature at the University of Nebraska-Lincoln and co-director of the Whitman archive, uncovered the thousands of documents at the National Archives vault in Washington DC. "I can remember getting glazed as I went over page after page, seeing no handwriting that looked like Whitman's," said Price. "And then suddenly I turned a page and there it was: unmistakably Whitman's handwriting."

The papers – almost 3,000 of them – have now been conclusively identified as Whitman's for the first time. They were written while the author of Leaves of Grass was employed as a government clerk between 1865 and 1874. He worked mainly as a scribe and copyist, drafting correspondence, copying letters written by others and researching a variety of issues.

Topics covered by the documents range from charges of treason to war crimes, the rise of the Ku Klux Clan and whether smallpox was used as a weapon during the civil war.

Price believes the discovery of the letters will "shed most light" on Whitman's work Democratic Vistas, published in 1871, in which the American author discusses the theory of democracy, criticising America for its "mighty, many-threaded wealth and industry", which he felt hid a "dry and flat Sahara" of the soul.

Price believes no serious biographer will be able to tackle the subject of Whitman in the future "without going through these documents and asking himself or herself what was the effect of all this material on Whitman's thinking and outlook".

"This was an age of high hopes but also big problems, and Walt Whitman was there in the thick of it," he said. "It was when Whitman came to Washington that he began to look for ways to earn a little bit of money, and eventually he got hired as a clerk in government offices. It's in the records of the attorney general's offices that I found this huge trove of Whitman documents – we're close to 3,000 documents now."

Whitman took the clerking job at the attorney general's office after he was fired from a similar position at the Indian Bureau of the Department of the Interior by new secretary of the interior James Harlan, who, keen to dismiss employees of questionable "moral character", saw the working copy of Leaves of Grass which the poet kept in his desk and was "appalled", according to the Whitman archive.