Where next for Mel Gibson? 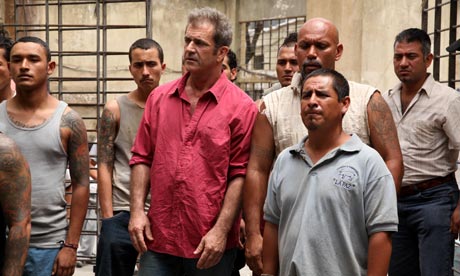 Mel Gibson in How I Spent My Summer Vacation

So this is where it ends for Mel Gibson and the widening gyre of his never-ending slow-motion personal apocalypse: his last movie, The Beaver, was a weird, misfired flop; another project, dealing with the ancient revolutionary Jewish sect the Maccabees, is in turnaround tailspin, after his own writer called him an insincere antisemite and downed tools; he was rudely bounced from the Hangover 2, and his latest completed project, How I Spent My Summer Vacation, directed by his own personal assistant, is due for a video-on-demand only release in the USA – which, on the totem-pole of desirable distribution-outcomes, is just one notch up from a straight-to-airline sale. The UK, meanwhile, is lucky enough to have it in its cinemas.

Fear not, though; amid his great tribulation, Saint Mel need not repine. He coined a billion shekels off The Passion Of The Christ, and he wasn't exactly rattling a tin cup outside a 7/11 before that either. But he did seem like a spent force after all those empty-headed blockbusters, and never mind the racially charged rape fantasies directed against his girlfriend, the "sugar-tits" incident, the logorrheic homophobia, the Lefebvrist Catholicism, the private chapel in Malibu and all the rest.

There was a time when it looked like it would all come together for Gibson. Having proven his iconic screen presence in Mad Max and The Road Warrior, he showed in The Year Of Living Dangerously glimpses of the charisma, toughness and vulnerability that one associates with grown-up movie stars such as Bogart and Henry Fonda. It was still discernible in Mrs Soffel and The Bounty and even in his Hamlet. And then he became a brand, and all that dried up, leaving just the money. He had it all, and then he forgot the iron-clad First Law of Tinseltown, as articulated by Artie from The Larry Sanders Show: it's not the Jews who run Hollywood, "it's the gay Jews". And Mel, calamitously, is on the outside with both.

In retrospect, the most autobiographical character Gibson ever played wasn't William Wallace or Mad Max, but the suicidally self-hating detective Martin Riggs in the Lethal Weapon movies. The more Gibson misbehaves or appears in court, the more we hear of past suicide attempts, extended drying-out periods, anger-management programmes and the whole 12-step horror show.

Grant him this much: raised by his Holocaust-denying, extremist Catholic father Hutton in circumstances that appear almost cult-like and abusive, it's little wonder he turned out how he did, a cocktail of self-assurance and self-loathing. The "sugar-tits" debacle seems now like the agony of a man who desperately wants us to hate him as much as he hates himself – and will say anything to get us to that place. I miss the Mel that nearly was.