The wettest UK drought on record

The wettest UK drought on record

Hosepipe bans remain in place in some parts of England, despite groundwater levels beginning to rise

Groundwater levels have started to rise in some areas after the wettest April on record, but experts warn it will take more time and more rain to undo the drought.

In its latest update, the Environment Agency said drought was still affecting the South East, south west England, the Midlands, East Anglia and South and East Yorkshire, despite the recent heavy rain which has caused localised flooding.

But rivers are now at normal or above average levels, reservoir stocks have improved and dry soils have become wetter as a result of the record rainfall for the month, which saw most regions receive more than double the average rain.

And the agency said it had started to see initial increases in groundwater levels at sites in limestone and chalk aquifers, important for drinking water supplies.

But groundwater levels remain low for the time of the year, and 11 sites monitored by the Environment Agency (EA) are still "exceptionally low".

It will take more than the rain received so far to reverse the effects of the past two unusually dry years which have left swathes of England in drought, the agency said.

An EA spokesman said: "Recent rainfall has eased the situation for farmers, gardeners and wildlife, and has increased water levels in a number of public water supply and farm reservoirs." He continued: "But it will take more time and more rain to undo the effects of two dry winters on groundwater stores."

The Environment Agency also warned that should the dry weather return, river levels will quickly recede.

While river levels are high from the rain, the agency has asked water company Severn Trent to abstract water from the River Leam when flood alerts and warnings are in place to reduce flood waters, which will also help refill Draycote reservoir.

Hosepipe bans brought in by seven water companies across southern and eastern England, at the beginning of what turned out to be the wettest April on record since records began in 1910, remain in place. 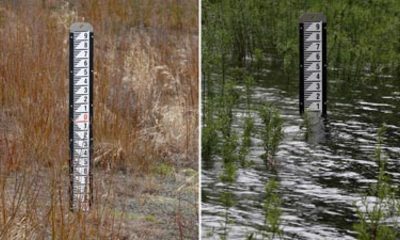 Parts of England are no longer in drought following the wettest April on record and continuing rain this month, the Environment Agency has said.

Counties in the South West, the Midlands and Yorkshire saw the status lifted after downpours boosted river and reservoir levels.

Water companies in those areas are unlikely to impose hosepipe bans on customers this summer, the Environment Agency said.

Groundwater levels are still low across the country, and parts of East Anglia and the South East remain in drought with hosepipe bans in place.

England's biggest water company, Thames Water, said it could rule out applying for a Drought Order allowing it to impose more serious restrictions on water use following the weeks of heavy rain.

But the firm warned its 8.8 million customers in London and the Thames Valley that it was too early to lift the hosepipe ban imposed early in April.

Richard Aylard, Thames Water's sustainability director, said: "It is a great relief for us that we can now rule out seeking a Drought Order this year.

"No water company wants to impose restrictions on its customers for any longer than absolutely necessary.

"Despite all the recent rain, we still have a serious groundwater shortage, and we could yet have a long, hot summer, so, much as we'd love to, it would be irresponsible for us to lift the hosepipe ban just yet."

Environment Agency chief executive Dr Paul Leinster said: "The recent record rainfall has eased pressure on water resources in some parts of England, helping levels in rivers and reservoirs to recover and providing relief to farmers, gardeners and wildlife.

"Low groundwater levels remain a concern across many parts of England, with many still at a similar level to those in 1976 and unlikely to return to normal levels before the winter.

"A return to a long period of dry weather would increase the risk again."

Environment Secretary Caroline Spelman said: "If an area is no longer in drought, the public shouldn't have the possibility of hosepipe bans or other temporary restrictions hanging over their heads, which is why Defra and the Environment Agency have been continuously monitoring and reviewing the drought situation.

"But we cannot forget that Anglia, London and the South East are still in drought and still experiencing water restrictions.

"That's because even the record rainfall we had in April and the prediction of more wet weather in May won't make up for the water shortages in these areas caused by two extremely dry winters."

I didn't make it to the Brecon Beacons, for obvious reasons.

Just sat in my London flat looking out the window at the rain.

I'd briefly considered a short trip to Oxford as an alternative. Then I read about the tornado in Oxfordshire...