'I'd go back to the 20s, where I'd invent modern comic books and be like, "No, I totally thought of this stuff myself! Let's Charleston!" 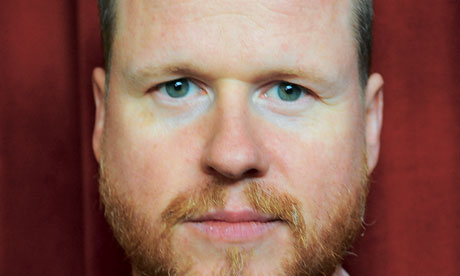 When did I last cry? Reading a friend’s obit. Photograph: Getty Images

Joss Whedon, 47, was born in New York. He graduated with a film studies degree from Connecticut's Wesleyan University, and became a screenwriter, working on the films Toy Story, Speed and Alien: Resurrection. His script for Buffy The Vampire Slayer was made into a movie in 1992; he then turned Buffy into a cult television series that ran from 1997-2003. The new Marvel blockbuster, Avengers Assemble, which he wrote and directed, is out now. His latest project is a film of Shakespeare's Much Ado About Nothing, which he made at his home in Santa Monica, California.

When were you happiest?
Filming Much Ado About Nothing. In my home, with my family and my besties and the bard all around. Pure joy.

What is your greatest fear?
That I'll run out of things to say and not have the courage to shut up.

What is your earliest memory?
Stepping on glass.

Aside from a property, what's the most expensive thing you've bought?
A digital camera that wasn't nearly as good as the cheapo model I had.

What is your most treasured possession?
That's not really my style.

What would your super power be?
Speak every language. Lame for comics (the X-Man who had it got super-killed), but awesome in life.

What do you most dislike about your appearance?
How much time do you have?

Who would play you in the film of your life?
A young, svelte Ned Beatty.

What is your favourite smell?
Truffles.

What is your favourite word?
Today, "Diaphanous." Today's runner-up: "Balls."

What is your guiltiest pleasure?
Killing drifters.

What do you owe your parents?
They made me who I am. It's not necessarily a compliment.

To whom would you most like to say sorry, and why?
My wife, for not knowing how to live as abundantly as she does.

Who would you invite to your dream dinner party?
Hitler. And I'd serve meat! In your face! It would be rude not to eat it!

Which words or phrases do you most overuse?
"I'm sorry, were you talking?"

What is the worst job you've done?
I once was a Hollywood writer.

If you could edit your past, what would you change?
Are you kidding? My past would be, like, eight minutes long.

If you could go back in time, where would you go?
To the 20s, where I'd invent modern comic books and be like, "No, I totally thought of this stuff myself. Let's Charleston!"

When did you last cry, and why?
Reading a friend's obit. Dude was 100, but still… he lived.

How do you relax?
I do not understand your earthworld questionings.

How often do you have sex?
What is this, Cosmo? Eight days a week, baby – matinees on Wednesday. Seriously, eew.

Where would you most like to be right now?
On the Great Wall, smoking a doobie and breaking a story.

Tell us a joke.
Your life has meaning.

Tell us a secret.
Your life has meaning.