TV review: John Le Mesurier: It's All Been Rather Lovely

John Le Mesurier never did anything as vulgar as showing his feelings, but he was always remarkably English 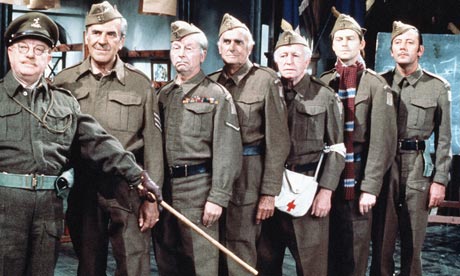 This is how John Le Mesurier, best known as Sergeant Wilson in Dad's Army, proposed to Joan Malin, his second wife. "Well, I don't suppose you'd take me on, would you?" She completely missed what he was talking about. "I'd no idea!" she recalls. It was only when he mentioned to a friend that she had turned him down that she realised (and later accepted).

It was all of a piece with the man and the actor, lovingly remembered on John Le Mesurier: It's All Been Rather Lovely (BBC 2). Friends and family gathered to paint an almost perfect picture of an almost perfect gentleman, complete with charm and an elegant unwillingness to do anything so vulgar as make his feelings known. He was happy to keep working, paying the bills with (admittedly scene-stealing) cameos in more than 100 films before the Dad's Army script that would forever change things came his way. Most things – especially kind women prepared to take care of him – eventually did.

After he and Malin married, she fell in love with his best friend, Tony Hancock. Le Mesurier told her he quite understood and became her confidante and counsellor when Hancock was drinking. Eventually, Malin returned to Le Mesurier and they never spoke of the unfortunate business again. The title of the programme was taken from his last words to her before he died.

The story was so English it could be used to replace the citizenship test. But then, it really had all been rather lovely.

I watched that, Eddie. Had several good chuckles. Le Mesurier, by all the accounts screened, was a much-loved friend/husband/father. If he seemed too nice a chap to be true, this tribute documentary made clear he was just as nice as he seemed.

In the early 60s I lived in Fulham, just off the North End Road, and walked to Earls Court station via West Brompton and Eardley Crescent for my daily commute: I seem to recall that one of either Hattie or John had a flat in the Crescent - but for the life of me, I can't now remember which. Apropos of nothing ...

I watched it as well. Very good. He did seem a nice chap, unfortunately, some people seemed to take advantage of that.
_________________
"Celine Dion and Oprah have given more to the world than any living member of the british royal family." - Captain Hi-Top