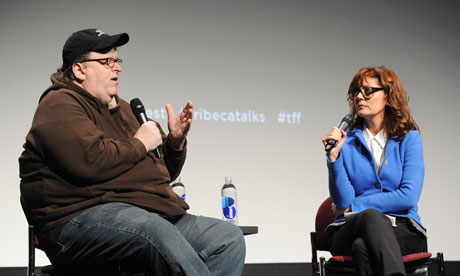 The film-maker Michael Moore has suggested that the phone-hacking scandal at News International may spread to US subsidiary Fox News while speaking at a film festival event in New York.

Moore, a long-term critic of the rightwing cable channel, said he found it hard to believe that the practice could be limited to the media conglomerate's UK businesses. UK Sunday newspaper the News of the World, which is owned by News International, was closed in July after 168 years in print after phone hacking was found to be widespread there.

"I'm interested to see what happens with Fox News and phone hacking," said Moore during an onstage conversation with actor Susan Sarandon at the Tribeca film festival on Sunday. "I really can't believe it just happens in Great Britain. Because really, who cares about just hacking phones over there?

"I'll make a prediction about something — I think the phone-hacking thing Murdoch is involved in ... is going to be investigated, and it will be found that it's been going on here too," said the documentary film-maker. "I just have a gut feeling."

So far there is no evidence to suggest that the phone-hacking scandal has spread to News International's US businesses, and Moore did not offer any to back up his claims. British prosecutors have raised the prospect of bringing legal proceedings in the US if British citizens' phones are found to have been hacked while they were on American soil, and several US politicians have called for investigations into suggestions that the company hacked the phones of 9/11 victims.

Moore and Sarandon, who is also known for her liberal leanings, both said they believed themselves to be under surveillance by US government agencies.

"I've gotten my [FBI] file twice," Sarandon said. "I know my phone was tapped. If they're not surveilling you, then everyone else has cameras on phones. I was denied security clearance to go to the White House [next week], and I don't know why."

Moore replied: "I never think about it. It would unwind me. I assume everything I'm saying in an email or saying on the telephone is being looked at."