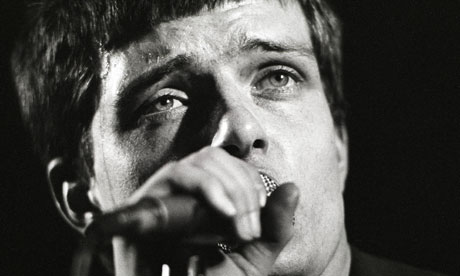 Ian was very ill with epilepsy when we were recording the Closer album. He was having a lot of blackouts. There was one horrible occasion where he was missing for two hours in the studio. I went in the toilet and there he was spark out on the floor – he'd had a fit and split his head open on the sink. There were a lot of occasions like that. While Closer was done pretty quickly after Unknown Pleasures, some of the songs were only finished in the studio. We were only in for two weeks including mixing. So you could feel the pressure. We didn't help by taking the piss all the time.

We recorded the album in March. He made his first suicide attempt in April, so it was pretty close. Ian was working well with our producer, Martin Hannett, who insisted on working through the night – Ian liked the peace and quiet. But it was fraught. We didn't have much money; we weren't eating properly and couldn't afford to drink. We played three nights at the Moonlight club in West Hampstead and supported the Stranglers at the Rainbow – four gigs in three days. Ian's illness was getting worse and we didn't help him, through ignorance really. But also, Ian was his own worst enemy – he never wanted to upset you, so he'd tell you what you wanted to hear. So we never knew what he was suffering or thinking.

He made two unsuccessful attempts. First, when he was really drunk, he self-harmed – chopped himself up with a kitchen knife, which I think was an Iggy Pop moment out of sheer frustration. Then he took an overdose. Tony Wilson, the boss of our label, Factory Records, brought him to rehearsal – straight from the hospital, I think. We'd ask: "Is everything all right, mate?" and he'd reply: "Yeah, fine, let's carry on." As an adult and a father now, I feel guiltier than I ever did then. If that had been my son, I'd have gone round there and headbutted Rob Gretton, our manager, and taken him home. But there were doctors, consultants, psychiatrists, and not one of them was able to sort it out. Unbelievable.

Rob had booked a gig in Bury. Ian decided he couldn't do it, but for some insane reason he was delivered to the gig, even though we'd arranged for Simon Topping and Alan Hempsall to stand in for him. Ian insisted on doing a couple of songs, and when he couldn't do any more the audience rioted. That destroyed him. Then our last gig in Birmingham was a grim affair. Ian's illness was dragging the whole thing down, but we'd spent three years going from playing to no people in Oldham to being revered. It was what he'd fought for all his life. None of us wanted to let it go. We all felt that if we stopped we might never get it again.

I heard what happened when I got a call from a policeman. It was horrible. Mind-numbing shock, and it's very difficult to live with as a memory. I can remember it like it was yesterday.

After something like that, you don't know what to do. The only thing constant in our lives was practice. When we left Ian's funeral we said: "See you at practice." That Sunday afternoon I got the six-string riff to Dreams Never End, which we recorded as New Order. We just put Joy Division in a box and closed the lid, but it enabled the remaining three of us to establish ourselves as New Order. Through New Order people continued to become aware of Joy Division.

I know Joy Division will always be overshadowed by Ian's death. I remember driving to the tax office to tax my old £100 Jag when the chart rundown went: "In at No 11, Joy Division with Love Will Tear Us Apart." I turned it off. For us, Joy Division had gone.

I think, as with Kurt Cobain much later, it was the death of innocence. Ian's daughter didn't have a father. Did independent music gain an icon? I'm too close to it. I had to view the death of Joy Division as a new start. All the battles we went through in Joy Division, we had to go through once again.

Listening to Closer again, it's heart-rending. Ian created a wonderful testimony of how he felt at the time: apprehensive, fearful but powerful. Not in control of your destiny: you can hear how that break evolved.