One man's inspiring dream to built a fitting tribute to the band's frontman, Lee Brilleaux 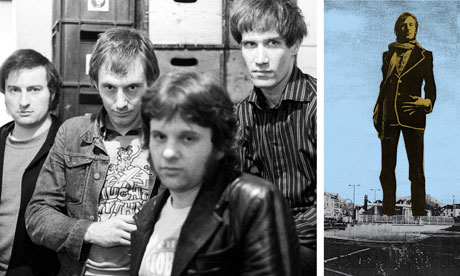 Dr Feelgood in 1975 (Lee Brillieaux second from left); and an artist's impression of the statue Photograph: Ian Dickson / Rex Features

'It's obviously an exaggeration, but it's born out of enthusiasm," says artist Scott King of his proposal to erect a 300ft-high gold statue of Dr Feelgood's singer Lee Brilleaux in Southend-on-Sea. The statue – or at least the proposal for it – is King's contribution to Thames Delta, an exhibition at the town's Focal Point Gallery from 16 April aiming "to reflect the growth, variety and development of popular music in the Southend-on-Sea, Canvey Island and Basildon area since the late 40s".

King says the idea is in equal part a tribute to the late frontman of the legendary Canvey Island R'n'B band, and part protest at what he calls "idiot-sized Anish Kapoor and Antony Gormley public art works that we're now suffering". "I don't necessarily believe that putting public money into huge scale public art works has cured anything, it's not cured the post-industrial problems of areas like Middlesborough. What happens is they build these things, there's an element of regeneration, but what seems to happen is that vintage shops and latte cafes spring up around primary industrial sites. They get rebuilt as places for middle-class people to go on a Sunday."

There is an online petition for the statue to be built, with supporters already including Neil Tennant of the Pet Shop Boys and artist Wolfgang Tillman, as well as Dr Feelgood's manager Chris Fenwick. But what do the people of Southend make of it? "I think they are very into the idea. People are a bit perplexed by the size of it, for obvious reasons, I guess there's some kind of confusion about whether I'm joking or not about it. I'm not joking at all. If there was some kind of memorial to Brilleaux at the end of this, I'd very grateful, even if it's 10ft tall. Obviously, if it's 300ft tall, that would be brilliant."

https://www.youtube.com/watch?v=rViBFgjChH0
She Does It Right, 1975

https://www.youtube.com/watch?v=GzF0AETdRF8
Live in Concert at the Southend Kursaal (15 minutes of Magic in the 4 songs).

Wilco has been cropping up quite a lot recently on, of all things, BBC Radio 4 where the world's most psychotic guitarist has expressed a deep knowlege of and affection for the Icelandic sagas.

No footage exists, as far as I'm aware, of early Rolling stones gigs at Alexis Korner's Ealing Rhythm n Blues Club or the Station Hotel, Richmond, but my guess is that the band must have sounded in those days a bit like Lee, Wilco & Co.

Dr Feelgood give it their all in a live performance before a village square of bewildered Finns.

My order from the online Cadiz music site of 'Oil City Confidential' arrived yesterday. Thanks for the tip, felix. It's fab. Funny and moving. Even bald as a coot, Wilko Johnson is a star: the greatest living Englishman.

In the same package came a CD of the Feelgood's first (mono) album 'Down by the Jetty' and the later live 'Stupidity' album.

But I'd neglected to order the 2nd studo album 'Malpractice', which apparently had a huge influence on the burgeoning New York punk scene, an omission I'll have to remedy rapidly.

The Feelgoods, as the documentary makes clear, were one of those bands who should have made it to the very top, but through a combination of circumstances- personality clashes, terminal illness- never hit the heights.

I only caught a small part of the Wilko Johnson interview on this morning's BBC Radio 4 'Today' programme on the subject of...well...dying.

Wilko seemed almost heroically upbeat as he described how the knowledge that he's going to die very soon added a greater intensity to everyday life: the feel of the wind in his face as he walks down the street, even the bricks in the road acquire a whole new significance.

Incredibly moving. I would have liked to hear the whole interview.

Ever since he left the British rhythm and blues band Dr Feelgood in 1977, the guitarist Wilko Johnson has rarely been off the live music circuit.

But now he has announced a farewell tour.

Wilko has been diagnosed with terminal cancer and has refused chemotherapy.

In an interview to be broadcast on this evening's Front Row, Wilko Johnson talked to the programme's presenter, John Wilson.

The full interview will be broadcast on Friday 25 February at 19:15 on BBC Radio 4's Front Row.