As she prepares to star in Sweeney Todd, Imelda Staunton talks to Kira Cochrane about evil characters, her problems with Sondheim – and when to plant sweet peas 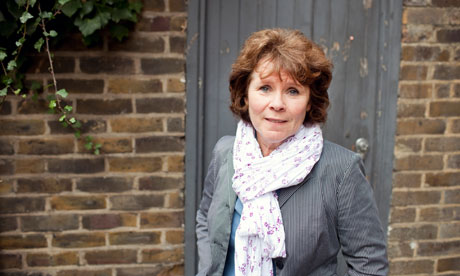 Is Imelda Staunton harbouring any filthy secrets? The question springs to mind in the first minute of our interview when Jonathan Kent, who is directing her in Sweeney Todd, pops into the rehearsal room to collect his coat – and suggests I shouldn't believe a word she says. "She's a nightmare to work with!" he says. "And a drunk." There is laughter as he leaves.

But dark secrets are apt, since we're talking about Staunton's role as Mrs Lovett: a woman who harbours a secret of monstrous proportions. The owner of a pie shop, Mrs Lovett is in love with the title character, an unhinged barber whose life and family have been blighted by a lecherous judge, and who slits people's throats in despair. Ever the pragmatist, Mrs Lovett – purveyor of "the worst pies in London" as one song has it, and stuck in an era of high meat prices – sees an opportunity.

"She has a good head for business," says Staunton, "and these bodies need to be got rid of. It's that lethal combination of –" she slips into cockney and gives it some shoulder "– East End sharpness, quick wit and scruples-ness." Switching back to herself, she adds: "Is that a word? People think she's just a silly old thing, but she's vicious. She'll do anything."

The idea was first mooted when Staunton appeared on Michael Ball's radio show a few years ago, and he asked on air if she'd like to appear opposite him in the musical. She refers to him, laughingly, as "Lord Ball". Her agreement wasn't a sure thing. In 1990, after appearing as the Baker's Wife in Into the Woods, another Stephen Sondheim musical, she said that she'd enjoyed the experience, but wasn't a great fan of the composer.

When I ask about this, she is unruffled. "I don't think it's that I don't like Sondheim," she says. "It's that I find it really … I don't know how to describe it. Doing it is the most extraordinary thing. Because it's like Shakespeare times 100 with singing. It's that satisfying – and that demanding." The music alone in Sweeney Todd lasts a total of 120 minutes and is notoriously complicated. After she agreed to play Mrs Lovett, she spent hours listening to Angela Lansbury in a recording of the original 1979 cast. She didn't want to come to the part fresh? "Bloody hell, no!" she says. She doesn't read music and found the first rehearsals tricky – but the production, which won rave reviews when it opened in Chichester last year, is now transferring to London.

It's not the first time Staunton has portrayed a working-class Londoner with a criminal secret. But in Vera Drake, the 2004 film directed by Mike Leigh that won her an Oscar nomination, there was no real viciousness: Drake was simply driven by a wish to help women with unwanted pregnancies at a time – the 1950s – when safe, legal abortion was unavailable. Staunton improvised for months to create this unassuming abortionist, bustling through a world of boiled wool and boiled kettles, and she dreamed about the character for months afterwards.

After years of steady work on stage, radio, in sitcoms and TV dramas, the film brought her an unexpected bankability. Before that, Staunton says, she would never have been cast as Professor Dolores Umbridge, the smirking sadist in a pink suit who torments Harry Potter. "I could have played it, but they couldn't have cast me because my profile wasn't [high enough]. That's no one's fault. That's the business."

She was asked to go to Hollywood, but wasn't tempted: Staunton is of a generation of British actors who rose through rep, combining a no-nonsense attitude with a glint of grandness and a bone-deep aversion to typecasting. "Maybe if I'd been 20, because if you're 20 you absolutely should. But also, I would only be out there playing little old ladies who make a lot of tea. No one's going to give me the head nasty cop … My life is here, and thank God I work and I've got a lot of stuff to do. I've got to walk the dog on the heath. I've got to get the sweet peas in by October for the spring."

Of course, if Staunton is harbouring any filthy secrets, the life she describes here would be the perfect front. She's been married to Jim Carter, who plays the glum butler Mr Carson in Downton Abbey, for almost three decades. They have one daughter, Bessie Beatrice, also an actor. "I'd like to think of Jim and myself as the Brad and Angelina of Equity," she says wryly. "Jimelda?" I suggest. "Yes!" she laughs, although their life isn't quite so glitzy, apparently. "I don't know if our gardening outfits are our most glamorous ones," she snorts, "but I think they might be."

Staunton has a habit of creating characters as she speaks, changing a persona entirely with just a tilt of the head, a change in her voice. It's this facility that has made her successful – but also strangely anonymous. I ask if she ever gets stopped on the tube. "No!" she says. "Not for a moment. There's a huge poster for Sweeney Todd at Southwark [where they've been rehearsing] and I'm like that –" She mimes standing in front of it, mugging ferociously. "And people walk past. Nothing. Absolutely nothing."

In her 30s, Staunton worried that work would drop off as she grew older; but in the 2007 BBC series Cranford, she revelled in the role of Miss Pole, a woman who could gossip her bonnet off. Staunton was part of a cast that, she says, was "remarkable in that most were women over 30". She pauses. "I mean over 40." Another pause. "I mean over 50!" She goes on: "In America, they make film stars and we make, well, I think character actors are our biggest export. A lot of film stars are just playing themselves in different frocks."

If there's any great secret to Staunton, it's that, beneath her twinkliness and wit, there lurks a darker mood. Now aged 56, she was glad to win her greatest recognition for Vera Drake, because she has always been drawn to the sad and the serious. She grew up an only child in London – her father a labourer, her mother a hairdresser – and believes the experience of being alone, creating worlds for herself, shaped her career. "It allows you a dark place that feeds your ability to look at other sides of people," she says. "I didn't have a dark, miserable childhood. But that was probably one of the things that enabled me to feel quite sad." I ask if this is necessary for her work. She says yes in a small voice.

There is a sadness underpinning the comedy in Sweeney Todd: the best productions are both uproariously funny and deeply disturbing. Is it difficult to find the line in Mrs Lovett between humour and horror? Staunton is emphatic. "There is no line as far as I'm concerned. There's just her character, her intention, her panic, her determination. I can see what she's doing, but I wouldn't like her. I know a lot of actors say, 'I really have to love the person'. That implies you love yourself."

Her nose wrinkles at the thought of such self-indulgence. "I don't have to love them," she says. "I just have to be them."