Steptoe and Son: the tempestuous ties that kept them together 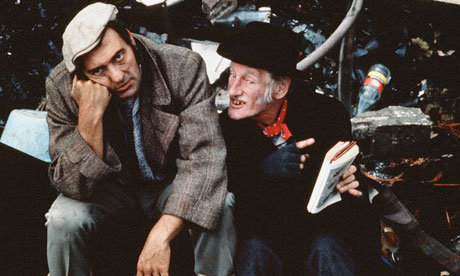 Harry H Corbett and Wilfrid Brambell together in the 1972 film version of Steptoe and Son. Photograph: Sportsphoto Ltd./Allstar

It was the perfect sitcom partnership, a marriage of love and loathing. But the stormy real-life relationship between Harry H Corbett and Wilfrid Brambell, stars of Steptoe and Son, has only now been fully documented, in a biography of her father by actress Susannah Corbett.

Herself a star of long-running TV hits, including Dalziel and Pascoe and Peak Practice, Corbett is uniquely placed to describe the tension and the grudging admiration between the two men.

From 1962 to 1974, Steptoe drew audiences of 20 million and more. Brambell, who was the wily, dirty-minded, jealous old rag-and-bone man, and Corbett, who played the unmarried, hapless son trapped by his own forlorn dreams, were among the best-known stars on TV.

When the series ended, both actors found that they, like their characters, were trapped together, with the public unwilling to accept them in other roles. When Corbett died from heart disease in 1982, aged just 57, a second Steptoe stage tour of Australia was being planned. That will come as news to the show's fans: most believed the pairing was shattered by Brambell's outrageous behaviour on their previous tour. A 2002 documentary, When Steptoe Met Son, claimed that Corbett was so disgusted by his partner's drunken antics that he vowed never to share a taxi with him again, let alone an international tour.

But Susannah, who joined them in Australia as a child of nine in 1977, saw the crisis unfold at first hand. She believes it was her mother, Maureen Corbett, who kept the show on the road: "Willie was very prickly, and my mother was good at dealing with that. He liked her very much and came to rely on her."

Maureen, who died in 1999, filmed much of the Australian and New Zealand tour and described in letters how she smoothed the partnership: "If Wilfrid hadn't had a terribly good night, he used to bite everybody's head off. So they used to send me along and I'd knock on the door – 'Oh right, darling, I'll be with you in a minute'. One day we thought he was having a heart attack; in fact, it was too many gins." In Christchurch, Brambell risked deportation, arriving drunk for a live TV interview and saying: "I hope your fucking cathedral falls down."

Corbett had to improvise the show on his own one night, after Brambell didn't turn up. He was eventually found, sitting down to a roast beef dinner in his stage clothes, at a friend's house, insistent that he would not work that evening. On another occasion he almost killed a woman from the audience who was trying drunkenly to climb on to the stage – Wilfrid booted her back into the stalls. When the woman reeled backstage to protest, it was Maureen, just 5ft tall, who fended her off in a Rada voice: "How dare you use such language in front of my daughter!" Susannah notes in the biography: "I'd heard far worse at home."

Unlike his screen character, Brambell was a dapper man. Writer Ray Galton, half of the Galton & Simpson team that created Steptoe, tells how Brambell was once refused entrance to the BBC club for being too well dressed.

Harry H Corbett was a graduate of Joan Littlewood's Theatre Workshop, the leftwing school of method acting. The 50s firebrand had been brought up in deep poverty by an aunt in Manchester, after his mother Caroline died from dysentery in Burma when he was a toddler. He served during the second world war with the Royal Marines – fighting hand-to-hand in New Guinea against the Japanese. Years later he spoke of his worst experiences only once, not to Susannah but to her brother Jonathan: "It's not the kind of thing you tell your little girl." He had to kill two of the enemy – "one with a bayonet and one with a commando knife, looking the guy in the eyes as they glazed over, knowing he was the last thing the poor little bastard saw."

When hostilities were over, Corbett jumped ship rather than join a working party to Tonga. He stayed on the run for 20 days, living off money won with card tricks on Sydney docks and spending his nights in the red-light district, before handing himself in to the military police. "Harry was never into acting macho," his daughter says, "he just was macho."

Harry H Corbett, The Front Legs of the Cow, by Susannah Corbett

The Masters Of Sitcom, from Hancock to Steptoe, by Christopher Stevens