Bruce Springsteen: 'What was done to my country was un-American'

The Boss explains why there is a critical, questioning and angry patriotism at the heart of his new album Wrecking Ball 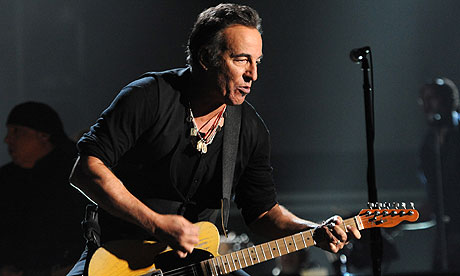 'Pessimism and optimism slam against each other in my music' … Bruce Springsteen. Photograph: Kevin Mazur/WireImage

At a Paris press conference on Thursday night, Bruce Springsteen was asked whether he was advocating an armed uprising in America. He laughed at the idea, but that the question was even posed at all gives you some idea of the fury of his new album Wrecking Ball.

Indeed, it is as angry a cry from the belly of a wounded America as has been heard since the dustbowl and Woody Guthrie, a thundering blow of New Jersey pig iron down on the heads of Wall Street and all who have sold his country down the swanny. Springsteen has gone to the great American canon for ammunition, borrowing from folk, civil war anthems, Irish rebel songs and gospel. The result is a howl of pain and disbelief as visceral as anything he has ever produced, that segues into a search for redemption: "Hold tight to your anger/ And don't fall to your fears … Bring on your wrecking ball."

"I have spent my life judging the distance between American reality and the American dream," Springsteen told the conference, where the album was aired for the first time. It was written, he claimed, not just out of fury but out of patriotism, a patriotism traduced.

"What was done to our country was wrong and unpatriotic and un-American and nobody has been held to account," he later told the Guardian. "There is a real patriotism underneath the best of my music but it is a critical, questioning and often angry patriotism."

The tone is set from the start with the big, bombastic We Take Care of Our Own – a Born in the USA for our times – where the most sacred shibboleth of Ordinary Joe America is sung with mocking irony through clenched teeth by a heart that still wants it to be true. "From the shotgun shack to the Superdome/ There ain't no help, the cavalry stayed home." It is a typical Springsteen appeal to a common decency beyond the civil war he sees sapping America.

Like Born in the USA, which got pressed into service as the anthem of the first Gulf war, he's aware it has the potential to be hijacked by the angry right. But Springsteen says that to anyone who cares to listen to the lyrics, the message is clear.

"A big promise has been broken. You can't have a United States if you are telling some folks that they can't get on the train. There is a cracking point where a society collapses. You can't have a civilisation where something is factionalised like this."

Springsteen plunges into darker, richer musical landscapes in a sequence of breath-taking protest songs – Easy Money, Shackled and Drawn, Jack of All Trades, the scarily bellicose Death to My Hometown and This Depression with Tom Morello of Rage Against the Machine – before the album turns on Wrecking Ball in search of some spiritual path out of the mess the US is in.

But it is also an ode to hard work, to the dignity it brings, and the blue-collar values he claims made America:

Asked where the fury of this lyric had come from, he talks movingly of his father who had been "emasculated by losing his job" in the 70s and never recovered from the damage to his pride. "Unemployment is a really devastating thing. I know the damage it does to families. Growing up in that house there were things you couldn't say. It was a minefield. My mother was the breadwinner. She was steadfast and relentless and I took that from her.

"Pessimism and optimism are slammed up against each other in my records, the tension between them is where it's all at, it's what lights the fire."

Hope is there. But it is a tempered hope. Land of Hope and Dreams is a plea for America's newest immigrants, those risking their lives to ride the trains up from central America. "This train … carries saints and sinners … losers and winners … whores and gamblers … Dreams will not be thwarted … Faith will be rewarded."

Springsteen, 62, says he is not afraid of how the album will be received in election-year America: "The temper has changed. And people on the streets did it. Occupy Wall Street changed the national conversation – the Tea Party had set it for a while. The first three years of Obama were under them.

"Previous to Occupy Wall Street, there was no push back at all saying this was outrageous – a basic theft that struck at the heart of what America was about, a complete disregard for the American sense of history and community … In Easy Money the guy is going out to kill and rob, just like the robbery spree that has occurred at the top of the pyramid – he's imitating the guys on Wall Street. An enormous fault line cracked the American system right open whose repercussion we are only starting to be feel.

"Nobody had talked about income inequality in America for decades – apart from John Edwards – but no one was listening. But now you have Newt Gingrich talking about 'vulture capitalism' – Newt Gingrich! – that would not have happened without Occupy Wall Street."

Having previously backed Obama, Springsteen says he would prefer to stay on the sidelines this time. "I don't write for one side of the street … But the Bush years were so horrific you could not just sit around. It was such a blatant disaster. I campaigned for Kerry and Obama, and I am glad I did. But normally I would prefer to stay on the sidelines. The artist is supposed to be the canary in the cage."

Obama hasn't done bad, Springsteen says. "He kept General Motors alive, he got through healthcare – though not the public system I would have wanted – he killed Osama Bin Laden, and he brought sanity to the top level of government. But big business still has too much say in government and there has not been as many middle- or working-class voices in the administration as I expected. I thought Guantanamo would have been closed but now, but he got us out of Iraq and I guess we will soon be out of Afghanistan."

The album is the last on which Clarence Clemons, the legendary saxophonist from the E Street Band, played on before he died last year. "When the sax comes up on Land of Hope and Dreams," Springsteen says, "it's a lovely moment for me."

• Wrecking Ball is released on 5 March via Columbia.

...hello user. You post so many interesting pictures. I wish I could interpret them. Looking forward to your choice of avatar some time soon.