Max von Sydow has been making movies since 1949, with everyone from Ingmar Bergman to Woody Allen. Now, at 82, he could be about to win his first Oscar 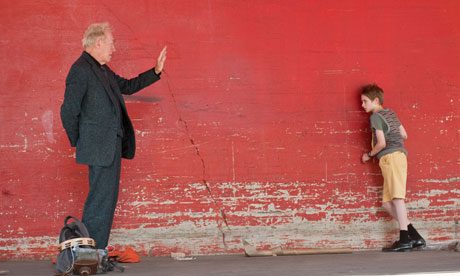 Only at the end of our interview does it become a little clearer why Max von Sydow so enjoyed making Extremely Loud & Incredibly Close, Stephen Daldry's slushy adaptation of Jonathan Safran Foer's novel about a boy coming of age in the wake of 9/11. In the film, Von Sydow plays a mute man known as The Renter, whose cloistered life is irrevocably disrupted when a hyperactive young boy, played by Thomas Horn, bursts into his room and babbles manically, before dragging Von Sydow off on an adventure in search of something very important.

At the end of our interview, in a quiet hotel room in New York, a young boy (who is, in fact, Horn) bursts into the room and babbles manically about needing to find someone. It is such an echo of the movie that it could be a PR stunt, but Von Sydow and his elegant French wife Catherine (who has accompanied her husband on this interview, as she often does) stand up, delighted. "What's wrong, Thomas?" he asks, his carved granite face splitting into a grin. The atmosphere, which had been as solemn as an Ingmar Bergman film, is immediately transformed.

Being both a highly prolific actor as well as one who has been making movies since 1949, there is inevitably a varying degree of quality in Von Sydow's output. For every Wild Strawberries, Hannah and Her Sisters, The Exorcist and Pelle the Conqueror, there is a Strange Brew (a 1983 Canadian comedy set in a brewery). But last month, Extremely Loud got Von Sydow an Oscar nomination for best supporting actor. "I didn't know anything about the book when I read the script," he says, his large and, at 82 years old, still athletic-looking frame dwarfing the fussy little hotel chair. "But I was very pleased Stephen Daldry was to direct it. All of his films have a special quality. Uhhh, let's call it a Daldry quality."

There is, however, a downside to this film for Von Sydow: his character has to come to terms with the death of his son, which is precisely the role he played (brilliantly) in The Diving Bell and the Butterfly, only five years ago, to great acclaim. "I would love to do parts I have never done before, but unfortunately if you have had success in a particular type of character the casting agents think, 'Oh! We'll have something exactly like that.'" He makes a heavy sigh. "It's very boring."

Boredom with work does sound like a problem for Von Sydow. He has been as active in the last decade as he has ever been, appearing in Minority Report and Shutter Island, among many others. But, with rather pleasing gloom and delightful candour, he sees the issue differently: "As you get older, you get offered old characters and very often old people die in the middle of the script. It's sad, but it's not very interesting."

Von Sydow has not had to wait until his ninth decade to suffer the fate of typecasting, though. Ever since he made the move from European to American films in the 1960s, his distinctive voice led him to be frequently cast as either a bad guy ("I'm not surprised – it's probably natural that the evil character is not one of us, but it gets boring") or a religious figure ("It can be interesting, but it can also be very boring"). Even when he was starting out, at the Royal Dramatic theatre in Stockholm in his early 20s, he was often cast as a farmhand just because of his height ("That wasn't particularly interesting.")

But Von Sydow is charming company: talkative, honest and endearingly attentive to his wife, with whom he has two children (he also has two from a previous marriage). He often talks about what "we" think as opposed to "I" and casts glances at her as if to check her opinion. (She often seems more interested in reading her book than hearing her husband tell yet another journalist about his experiences with Ingmar Bergman.)

But, anyway, let's talk about Bergman, the director with whom he will always be most closely associated, having collaborated on 13 movies. "Our relationship was extraordinarily important, on both a personal and professional level. It was complex and without it I would not be here," he says simply. "He taught me that when you play classical characters you should not take them too seriously, because they are human. Bergman had a great sense of humour." Really? Few people think of Bergman as a laugh-a-minute guy. "Oh!" says Von Sydow, as if shocked that anyone should associate the director of The Seventh Seal with anything other than larks. "It was very important to Bergman that everyone on his sets had fun together."

Von Sydow was born in Sweden, the son of a professor and a teacher, neither of whom were thrilled by his decision to act. "My parents were brought up in families which believed theatre people weren't to be trusted. But," he adds, with a shrug, "they were nice people."

Born Carl Adolph von Sydow, he changed his name when he moved into acting. Is it true he named himself after a flea? "Ha ha ha!" booms Von Sydow, his laugh filling the room. "Yes! Ha ha ha! During my military service, I performed a sketch in which I played a flea called Max. So when critics kept misspelling my name, I decided to change it and thought, 'Ah! Max!'"

Von Sydow's transition to American movies was not a particularly happy one, starting off as Jesus in the rather dreary The Greatest Story Ever Told, which he had been reluctant to do but was nagged into submission. The film went against all he had learned from Bergman about how to play classical parts. "There is no life in the characters – they were played like machines, as if seduced by their own importance. They are not human." It threw Von Sydow into another typecasting bind as he was offered "a lot of religious characters – bishops, saints, popes! Which can be very boring."

Not always, though. One of his most famous roles was as Father Merrin in The Exorcist. This, he concedes, was fun, not least because the director, William Friedkin, was a "wild guy" who would do things like fire guns off-camera to elicit reactions from his actors. Directors such as David Lynch and Martin Scorsese have utilised the gravitas, even menace, Von Sydow brings to the screen in, respectively, Dune and Shutter Island. But it was Woody Allen who best exploited the tenderness beneath this in Hannah and Her Sisters, in which he played Fredrick, the tortured artist. In the extraordinary scene where Fredrick's partner Lee (Barbara Hershey) tells him she's leaving, Von Sydow moves from larkiness to puzzlement to anger to grief to devastation in about six minutes. "It was a funny experience because what Allen does is get the stand-ins to rehearse while we watch, and then we film! It surprised me. He is an interesting man, a stimulating personality."

These days, he and Catherine live in Paris. What more would he like from his career now? "I would love to do parts I haven't done before," he replies. And with that, he sighs.