The level of criticism Cruise has endured would floor a lesser temperament. But as M:I-4 makes big bucks, is he back by stealth? 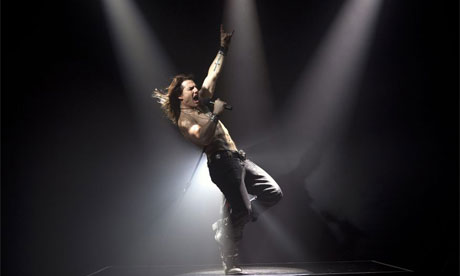 Got my mojo back … Tom Cruise as Stacee Jaxx in Rock of Ages. Photograph: Allstar/New Line Cinema/Sportsphoto Ltd/Allstar

Everybody loves a comeback. Mickey Rourke has been a major player ever since roaring back meatily and teary-eyed from a decade or so in the wilderness with The Wrestler, while all eyes are on Arnold Schwarzenegger to see if he can conjure up a little of the old 1980s magic in The Last Stand and The Expendables 2. And yet the most impressive renaissance of the past few years may have been more of a stealth affair.

Since that notorious sofa-jumping incident in 2005, Cruise has been written off by industry bloggers, abandoned by Hollywood bigwigs, embarrassed by water-toting TV presenters, accused of hiding his true sexuality by sniggering comics and pilloried by just about everybody else for his commitment to Scientology. Six years ago, Paramount head honcho Sumner Redstone said Cruise's public persona had been so devalued by his off-screen antics that he was no longer worth the studio's time. Three years ago, we were told Tom was so unpopular that 20th Century Fox had decided not to use his image to promote action comedy Knight and Day, which was promptly panned by the critics. More recently the rumour mill told us Cruise's star had fallen so far that producers had decided to draft in Jeremy Renner to replace him in the Mission: Impossible franchise. The vultures were not just circling, they had taken up residence and hawked front row seats to the schadenfreude circus that seems to follow the star of Top Gun everywhere he goes.

Unfortunately for the above, Cruise himself does not seem to have read the script. It has been revealed that his latest film, Mission: Impossible – Ghost Protocol, has just become the most profitable instalment in what was already a pretty bankable series with an impressive $571m worldwide. Those who have seen the film will also be aware that reports of Cruise's demotion turn out to be greatly exaggerated: when the Missions get really Impossible, it is Cruise's Ethan Hunt who is called upon to scoot up and down skyscrapers, grinning toothily and flexing impressive if slightly terrifying 49-year-old sinews as Renner and the rest of the team bite their fingernails in the background.

Whatever one's feelings about Cruise's religious beliefs or antics, one has to admire the kind of relentlessly bull-headed determination which has seen him refuse to give up the mantle of Hollywood's blockbuster action big dog. Will M:I-4 end up being one last action hurrah before Cruise accepts the inevitable and allows his agent to send him the odd script for a character-led supporting role? Sly Stallone is still pounding the weights well into his 60s and Liam Neeson has recently emerged as an unlikely action hero while approaching the same sort of age, but it's worth noting that Cruise has a far wider range than the former and is unlikely to plump for the kind of furrowed-browed, exploitation-tinged fare that has characterised the latter's recent efforts.

Next up for Cruise, instead, is a turn as legendary rocker Stacee Jaxx in the hair-metal musical Rock of Ages, not a role that's likely to prove particularly demanding or shift perceptions of him as an actor. Like the Mission: Impossible series and Knight and Day it's yet another part that disguises any real-life unpopularity with the cinemagoing public by parachuting him into view as the coolest man on the planet, in this case one so in-demand that attractive women throw themselves at him, hoping desperately to have their appendages signed (see trailer).

Cruise's Hollywood A-lister predecessors didn't need that: Schwarzenegger was confident enough in his standing to send up his tough guy image in 1994's Junior, while Jimmy Stewart, Cary Grant and Tony Curtis all took risks playing offbeat or downright unpleasant characters. Now that he's proved himself still capable of headlining a tentpole movie, might Cruise relax and head (back) into equally edgy territory? Many of us would love to see him playing against type once again as he did in Paul Thomas Anderson's Magnolia, but we'll probably have to accept that a career portraying weirdos is an unlikely direction for a man who is routinely described as being one. Personally I'd settle for seeing him in another villainous role, such as Vincent, his contract killer in Michael Mann's Collateral, or even as a damaged hero like the drug-addicted future cop in Steven Spielberg's Minority Report. A revival of his much-discussed Les Grossman character from Tropic Thunder might just do the trick, though the hideous film producer's over-the-top antics always reminded me rather too much of sofa-jumping Tom.

Cruise may have rediscovered his mainstream mojo in the four years since the underwhelming Valkyrie, but I think it's fair to say that he's done it without really stretching himself. The true mark of the actor's renaissance will be what he decides to do with the next stage of his career. He may be back on top of the heap, but he can't keep running up and down skyscrapers forever, or audiences may start to reckon these Missions really are a bit too Impossible to be worth bothering with.