Alexander Payne has toned down his masculinity-crisis shtick, and lost something in the process 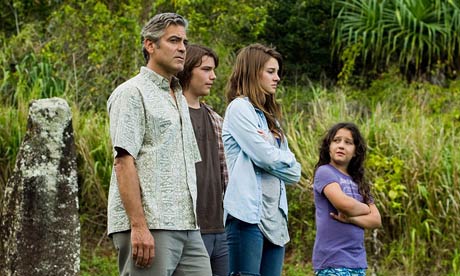 This sweet, sad new film from Alexander Payne holds a promise of gentleness that is fulfilled, and a promise of complexity that isn't. Starring George Clooney as a wealthy Hawaiian lawyer whose wife is in a coma, The Descendants has a kind of surface difficulty, but is distinctly soft-centred, lenient and sentimental compared to the three scabrous and brilliant pictures that have cemented Payne's reputation over the last decade.

It is commonplace to refer to Payne's films as bittersweet, and to the director himself as American cinema's prose-poet of the male menopause. In Election (1999), Matthew Broderick is the middle-aged schoolteacher who conceives an obsession with a pushy teen pupil – a career-best performance from Reese Witherspoon – whose chances of becoming school-president he attempts to destroy . In About Schmidt (2002), Jack Nicholson's lonely and cantankerous widower embarks on a destructive mission to stop his daughter from marrying a man he loathes. And in Sideways (2004), Paul Giamatti is the failed novelist who seeks to reclaim some status and self-respect in his connoisseurship of wine.

Of these three films, clearly the one The Descendants resembles most – while in crucial respects not actually resembling it at all – is About Schmidt. But it has nothing like that film's fierce power, and Clooney, though winning and vulnerable, does not raise his game for Payne the way Jack Nicholson did. What is most distinctly bittersweet about watching The Descendants is the realisation that this director has had to slush up and increase the sucrose-content to find a breakthrough success and four Oscar nominations.

Clooney plays Matt King, a career lawyer and sole executive trustee of huge swaths of family-owned land; a beautiful wilderness of enormous significance to indigenous Hawaiians. We find King in the middle of a grave crisis: his wife Elizabeth (Patricia Hastie) is on life-support, following a speedboat accident. The situation has caused huge behavioural problems with his daughters, 17-year-old Alex (Shailene Woodley), and 10-year-old Scottie (Amara Miller) and it is Alex, boiling with confusion and anger, who tells Matt that Elizabeth was planning to leave him for someone else. This turns out to be Brian Speer (Matthew Lillard), a married man in the property business whose financial affairs mesh worryingly with Matt's. Matt and the girls set out to track this man down, a bonding expedition with ambiguous intent. It is not simply that they wish to confront Speer.

It is an intriguing high concept – and a continuous, incidental, low-key pleasure of the movie is its intelligent and matter-of-fact representation of Hawaii itself, stripped of the cliches and shown as a contemporary place where people live and work, as well as just go on holiday. The soundtrack features beautiful, melancholy Hawaiian music. As an actor, Clooney may not offer us anything radically new, but his mannerisms and tics are tamped down; his line readings are forthright and intelligent, and there are modestly affecting tears. Robert Forster puts in a robust performance as Elizabeth's grieving father, contemptuous of his son-in-law (perhaps the film should have been all about him), and Judy Greer has a powerful and unexpected speech as Speer's wife, Julie.

The problem is that so much of the pain on which the movie is premised simply vanishes. The girls' emotional problems with their father – including some serious drink and drug issues for Alex – melt away to nothing when their quest begins. Substance abuse does not usually cease to be a problem when the sufferers are put under pressure like this, and Alex, in fact, becomes almost a sort of Nancy Drew figure. She brings along on their quest a friend-cum-boyfriend called Sid (Nick Krause), whose dopey tactlessness is contrived and cartoony. All the agonised implications of being unable to condemn a sick woman, or side against her adulterous lover, are cancelled too smoothly; the movie offers an easy palliative care of its own, as well as finally fudging an important decision on which a great deal was supposedly at stake.

The road-movie male crisis trope is familiar from Payne's other work, but his previous male anti-heroes were horribly real losers – lonely, unhappy, disappointed with themselves and disappointed with life itself. Clooney's character is not like that at all; he's never afraid the way they were, and he's an exotically created, hot-house-grown winner. This is an alpha male, wealthy, powerful and someone who, despite his supposed failings as a husband and father, is seen to behave well on screen and has a basic claim on our sympathies that is never seriously challenged by the action of the film. Payne's previous work has a confrontational quality; the earlier films were about what happens – to men, especially – when life's end is in sight, when goals and attainments are no longer feasible, and some sense has to be made of it all. The Descendants is notionally about the same sort of thing, but swathed in a romantic comfort blanket. Payne has found his softcore style, and it's fluent and persuasive, but I preferred the earlier voice: comic, lacerating and unflinching.