all across the universe :: Music :: Blues

Blues and soul singer with a raw, emotional vocal style 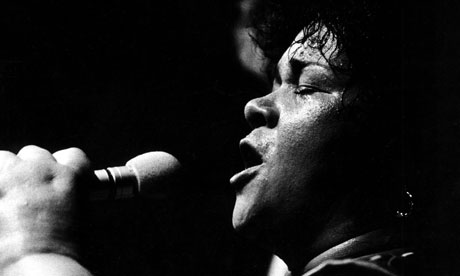 Etta James's approach to singing and to life was one of wild, desperate engagement. Photograph: Sherry Rayn Barnett/Getty Images

Etta James, who has died aged 73 after suffering from leukaemia, was among the most critically acclaimed and influential female singers of the past 50 years, even if she never achieved huge popular success. From her first R&B hit, in 1955, the risqué Roll With Me Henry – cut when she was only 15 – through a series of classic 1960s soul sides (the lush ballad At Last, the raucous house rocker Tell Mama and the emotional agony of I'd Rather Go Blind), then a series of critically acclaimed 1970s and 1980s albums that won her a broad rock audience, to more recent albums of jazz vocals, James proved capable of developing and changing as an artist.

Her approach to both singing and life was throughout one of wild, often desperate engagement that included violence, drug addiction, armed robbery and highly capricious behaviour. James sang with unmatched emotional hunger and a pain that can chill the listener. The ferocity of her voice documents a neglected child, a woman constantly entering into bad relationships and an artist raging against an industry and a society that had routinely discriminated against her.

James's continuing appeal to new generations was proved when the R&B superstar Beyoncé played James in the 2008 film Cadillac Records. The British pop singer Adele said that it was buying an Etta James CD when she was 13 that made her want to sing.

She was born Jamesetta Hawkins to 14-year-old Dorothy Hawkins and an unknown white father, although James maintained he was the pool shark Rudolf "Minnesota Fats" Wanderone, and was raised at first in Los Angeles by adoptive parents. From the age of five, she sang gospel in the local church and later acknowledged the influence of the choirmaster, Professor James Earl Hines.

When Jamesetta's adoptive mother died, Dorothy reappeared and took her 12-year-old daughter to San Francisco. Dorothy was a hustler and showed no inclination to change her lifestyle. "She was never there when I got off from school," James recalled, "so I could pretty much do what I wanted to do … drinking, smoking weed." Violence and substance abuse were now constants in James's life and she would maintain a difficult, combative relationship with her mother across many decades.

James formed a vocal trio, the Creolettes, with two teenage friends. They auditioned for the maverick R&B band leader Johnny Otis. He was so impressed with James's voice and her songwriting skills that he offered to take her to Los Angeles the following day to record Roll With Me Henry. She agreed, lied to him that she was 18 and, when he demanded her mother's signed consent, went home and forged it – Dorothy was then in prison.

Roll With Me Henry was retitled The Wallflower – Modern Records decided the original title was too explicit – and Otis renamed his protege Etta James. The song reached No 1 on the R&B charts (while Georgia Gibbs's bland cover went to No 1 in the pop charts). The follow-up, Good Rockin' Daddy, reached No 12 in the R&B charts in November 1955.

As a teenager on tours with Otis, Johnny "Guitar" Watson, Ike and Tina Turner and Little Richard, James encountered and quickly embraced much debauchery. Although there were no more 50s hits, she was a popular attraction in black America's working-class "chitlin' circuit" clubs.

In 1959 James signed with the Chicago blues label Chess, which began marketing her as the "Queen of Soul". She notched up such hits as All I Could Do Was Cry, If I Can't Have You and At Last. Here her powerhouse contralto voice was matched with the sumptuous, bluesy string arrangements of Riley Hampton, and James truly came into her own as a singer. Her 1963 album Etta James Rocks the House was recorded live at the New Era club in Nashville and documents a formidable performer.

In 1967 Leonard Chess, the founder of Chess Records, sent James to Alabama to record at Fame studios with the producer Rick Hall. The resulting sessions produced the roaring Tell Mama, which took her back to the R&B top 10. Tell Mama's B-side was I'd Rather Go Blind, a brooding, agonised ballad of loss and jealousy which now stands as James's most celebrated recording and one of the classic sides of soul music. James wrote or co-wrote several of her greatest songs.


That year, James's influence was everywhere, with a variety of black female singers (including Turner, Gladys Knight and Candi Staton) employing her defiant, abrasive vocal style. Janis Joplin modelled her singing closely on James and covered Tell Mama. James was a star, yet one seemingly set on self-destruction. Addicted to heroin and bad men, she lived a criminal lifestyle and was jailed several times. After leaving jail in Anchorage, Alaska, in 1969, she met and married Artis Mills. When, in 1971, the couple were arrested in San Antonio, Texas, on narcotics charges, Mills took the fall. On his release in 1981, the couple reunited.

James never again enjoyed a major US hit, although she continued to record strong material. Perhaps her voice, so raw and emotionally expressive, was too fierce for the general public. Indeed, hurt, anger and self-destructive behaviour boiled beneath the surface of her vocals. Once asked to describe her style, she responded that singing allowed her to vent "all this bitch shit inside of me".

The 1974 album Come a Little Closer, recorded while she was in rehab at a psychiatric hospital, features James at her best. A shift to Warner Brothers in 1978 did not return her to a wide audience and, although she often worked with major producers, James remained beloved more by critics and blues-soul aficionados than a mass audience.

When paired with the right producer and material, she delivered superb albums: Seven Year Itch (1989), Matriarch of the Blues (2000) and even her swansong The Dreamer (2011) find her interpreting lyrics with grace and venom. An elite fanclub ensured James sang at the Los Angeles Olympics opening ceremony in 1984, appeared in Taylor Hackford's celebrated Chuck Berry feature Hail! Hail! Rock'n'Roll (1987), opened stadium dates for the Rolling Stones and was inducted into the Rock'n'Roll Hall of Fame in 1993. She scored a surprising (and sole) UK top 10 hit in 1996 when her threatening reading of I Just Want to Make Love to You became the soundtrack to a Diet Coke advertisement. In 1995 James recorded Mystery Lady, the first in a series of jazz vocal albums where she channelled the influence of Billie Holiday. This brought her to yet another audience.


James won six Grammy awards and a star on the Hollywood Walk of Fame. Having finally conquered her drug addiction in 1988, she began to struggle with her weight – in 2002, weighing more than 400lb, she had gastric bypass surgery and lost 200lb, which allowed her to return to active singing and performing. The film Cadillac Records, a heavily fictionalised biopic about Chess Records, attracted wide attention due to Beyoncé's appearance as James. The young superstar made a decent job of portraying her as a foul-mouthed, two-fisted singer, yet lacked the raging bull quality that made James so unforgettable.

Beyoncé was invited to sing At Last at Barack Obama's presidential inauguration in January 2009. James publicly criticised her, then later offered an apology, suggesting that she was upset not to have been invited to sing herself. She added that she would have sung the song better. Rage to Survive, James's autobiography, was published in 1995 and proved as blistering as her singing.

She is survived by her husband and her sons, Donto and Sametto. 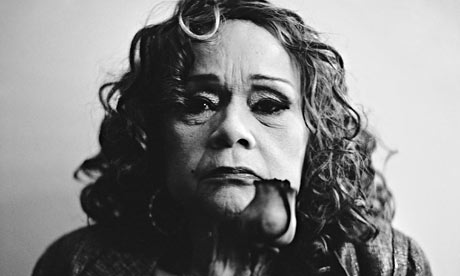 "Hers is an extraordinary story – her mother was a prostitute, she didn't know her father, for years she was a heroin addict. When I first heard her, I didn't know anything about that. I must have been about 14, and a bit of a grunger, when in the jazz section of the HMV on Oxford Street, surrounded by musos, I bought two records in a two-for-a-fiver deal. One was by Ella Fitzgerald and one was by Etta James. I just loved the way she looked, really – her curves and her catty eyes, and one of my cousins was a hairdresser so I asked her if she'd do me an Etta James beehive.

"By then, of course, I'd listened to her record as well, and that had a huge influence on me. Everything she sings – you believe her, even if she never wrote a word of it herself. I saw her live in New York not so long ago: extraordinary. There she was, at the age of 71, singing 'I want to ta ta you, baby' – almost groping herself, as if the meaning wasn't clear enough already. She just has so much attitude.

"I met her backstage after the show, very briefly. My mind went completely blank. I didn't know what to say. Afterwards, I was crying my eyes out."

Etta James – a life in pictures

Etta James scored her first hit in 1954, aged 15, with Roll With Me Henry, and her career took in blues, gospel, soul, jazz and rock'n'roll, as well as six Grammy awards and a star on the Hollywood Walk of Fame. She died in Los Angeles aged 73 after a battle with leukemia 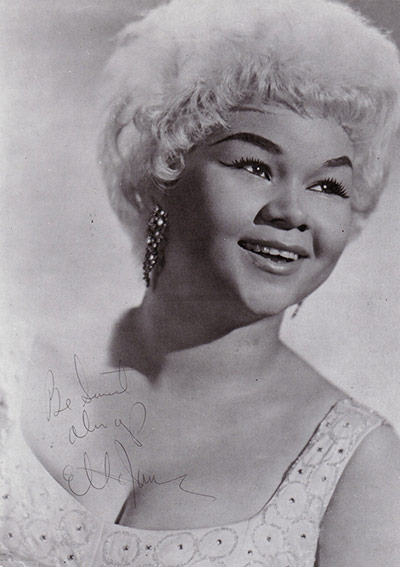 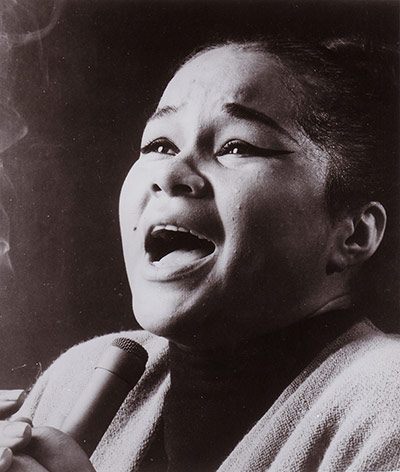 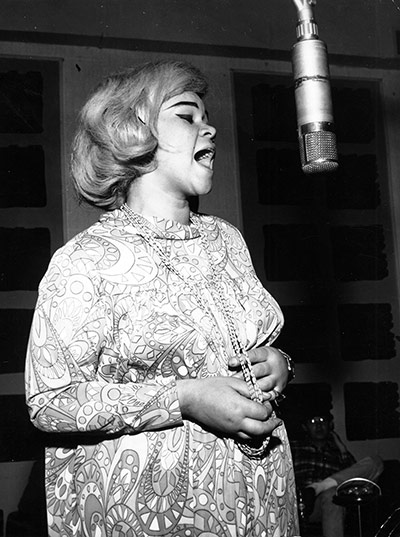 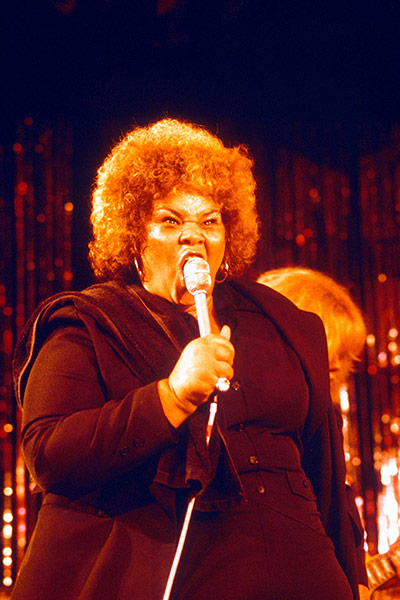 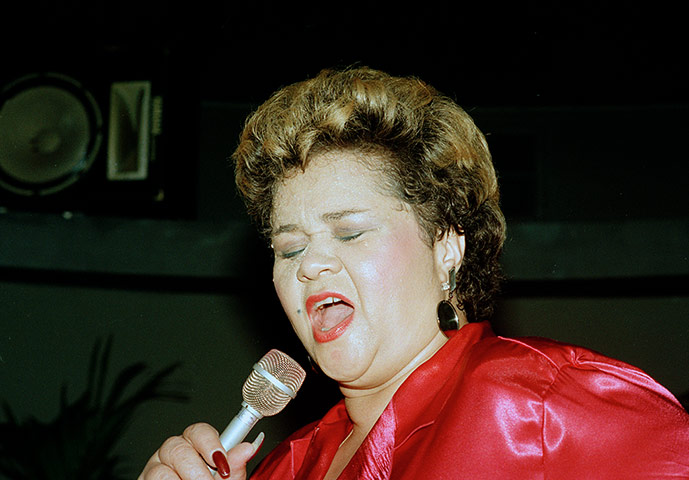 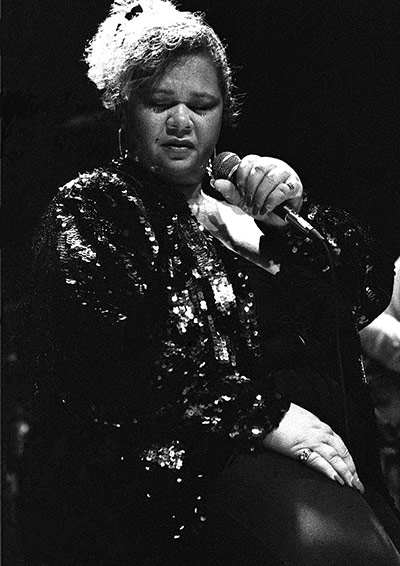 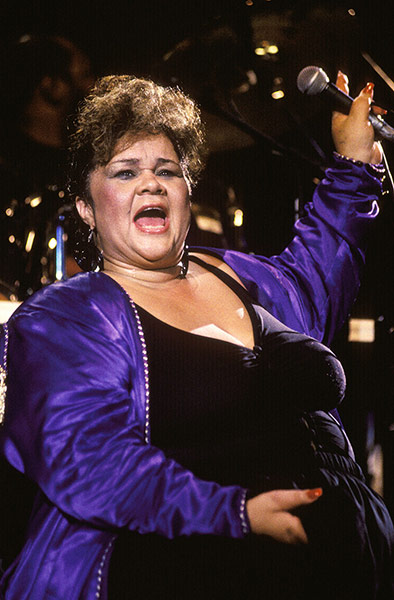 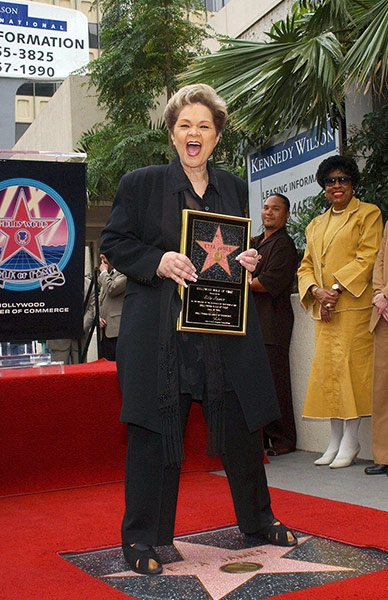 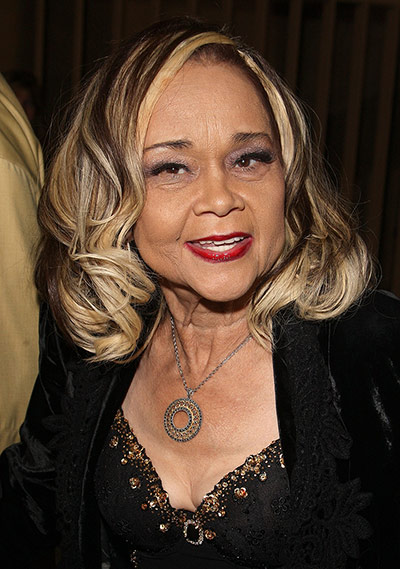 I first heard the wonderful Etta James in 1962 singing this wailing, gospel-styled r&b belter (memory might deceive, but it may have been at a lunch-time 'record-hop' session at the Lyceum - whatever, it knocked me sideways!

Later, I learned that she did the original version of Georgia Gibbs's 1955 hit "Dance With Me Henry". Etta's version, "Roll With Me Henry" was the answer to Hank Ballard's salacious "Work With Me Annie". Some genteel folks preferred the alternative title, "The Wallflower":

Still later, I heard - and loved - what is often cited as "her greatest" record, "At Last". Maybe it is her greatest? I still love it any way:

But she went on to make innumerable great records through the 60s and onwards.

EDIT: haven't checked the Grauniad's 10 great performances - but will do

I hadn't seen that before. Smokin'!!

all across the universe :: Music :: Blues