'What do I most dislike about my appearance? The size and shape of my head. I've been likened to Sid from Ice Age' 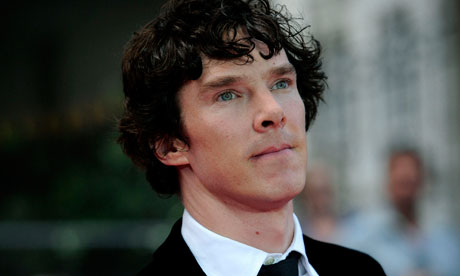 Benedict Cumberbatch: 'Which word or phrase do I most overuse? "Erm…" ' Photograph: Carl Court/AFP/Getty Images

Benedict Cumberbatch, 35, was born in London and educated at Harrow. In 2004, his portrayal of Stephen Hawking in the BBC drama Hawking earned him a Bafta nomination, and he got another for Sherlock; next year he plays the lead in Parade's End. On stage, he has appeared in Danny Boyle's acclaimed production of Frankenstein, and his film parts include Starter For 10, Atonement, Tinker Tailor Soldier Spy and Peter Jackson's forthcoming The Hobbit. He stars in Steven Spielberg's new film, War Horse.

When were you happiest?
With the sun on my face and a beer in my hand, the morning after I had been in a car-jacking in South Africa.

What is your greatest fear?
Forgetting people's names.

What is your earliest memory?
Falling off a swing at my grandmother's.

Which living person do you most admire, and why?
Amber, my aunt, and her boyfriend, Gian Luigi Valino – he has primary lateral sclerosis and she cares for him.

What is the trait you most deplore in yourself?
Impatience as well as indecision.

What is the trait you most deplore in others?
Lying.

What was your most embarrassing moment?
When I was six, I got stung by a wasp in a Greek market. A widow pulled down my pants, held me upside down and rubbed an onion on my bum.

What makes you unhappy?
The thought of what my grandchildren will have to endure.

What do you most dislike about your appearance?
The size and shape of my head. I've been likened to Sid from Ice Age.

What is your guiltiest pleasure?
The X Factor.

What is your most unappealing habit?
Hoarding. I drag a lot of stuff round with me that I don't need.

What would be your fancy dress costume of choice?
I rather enjoyed wearing bandages round my face as the Invisible Man at the last one I went to. People got to know me without recognising me.

What is the worst thing anyone's ever said to you?
A blog that said, "The talentless wooden acting of arse-named, horse-faced twot Benedict Cumberbatch."

What was the best kiss of your life?
One on a dancefloor when I was 21 – she knows who she is.

Which words or phrases do you most overuse?
"Erm…"

What has been your biggest disappointment?
Not being a dad by the age of 32.

If you could edit your past, what would you change?
I possibly might not have called Trevor Nunn Adrian Noble at my first audition for him.

What is the closest you've come to death?
I drive a motorbike, so there is the whiff of the grim reaper round every corner, especially in London.

What single thing would improve the quality of your life?
Better time management.

What do you consider your greatest achievement?
I wish I could say children.

What keeps you awake at night?
Fucking foxes.

What song would you like played at your funeral?
The Only Way Is Up.

How would you like to be remembered?
By being remembered.

Tell us a secret
Lines are very difficult to learn.