Seeing the light on Caravaggio: Andrew Graham-Dixon's portrait in words

Authors have struggled to translate Caravaggio's art into prose. But Andrew Graham-Dixon's biography looks at his subject with the same compelling intensity of the artist 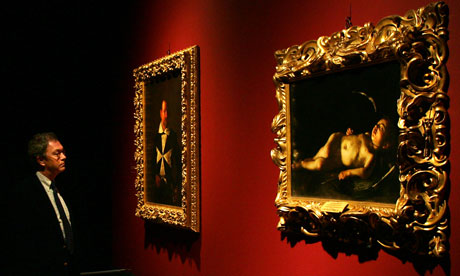 I've waited a long time for a decent book on Caravaggio to come along. For some paradoxical reason, this most compelling artist has inspired a lot of dreary analyses. Unable to translate the shock of his images into prose, authors either sensationalise his life story in ways so crass as to be irrelevant, or retreat into reconstructions of his networks of patronage that are so dull they make you wonder why you ever felt seduced by his art in the first place – until, once again, you see a Caravaggio in a gallery or a church that knocks you sideways and scars your soul.

Recently I wrote about how his Sleeping Cupid had this effect on me at the Pitti Palace in Florence. In his biography Caravaggio, the critic Andrew Graham-Dixon has a very clever explanation for the unique effect of Caravaggio's paintings. The reason they obliterate other paintings in a gallery, even great paintings, is, he argues, to do with Caravaggio's special intensity of looking, which he believes was formed during the artist's youth in the religious visual culture of Counter-Reformation Milan. Under the influence of sensationally realistic popular Catholic art and spiritual advice to hold images of the holy scriptures in your mind, Caravaggio developed his ecstatic painterly stare.

It is a brilliant argument, so deeply thought out and so convincing that it might even strike some readers as unexceptional. But this book is exceptional. I am reading it slightly late, in paperback, but at least the timing is good for me to recommend it as an art read this Christmas. Forget the expensive coffee table books. A true art lover would much rather have this feast of insightful writing as a present.

It is a very unusual book, because it is both truly accessible – the author assumes no prior knowledge of history, although he does assume you are probably interested in Caravaggio – and ruthlessly intellectual. Right from the get-go, Andrew Graham-Dixon offers acute interpretations, in crisp, lucid prose, of such subjects as the nature of the Renaissance, and why Caravaggio is so different from High Renaissance artists (they sought to idealise the world, he refuses to do so in any way). For me, this ability to express a subtle and often profound argument in a disarmingly direct, unpretentious way has always been Graham-Dixon's characteristic skill and it makes him brilliantly suited to television. In this book, it allows him to illuminate his dark narrative with flashes of dazzling perception.

It is an achievement worthy of its subject.

The Taking of Christ, 1602. National Gallery of Ireland, Dublin. Caravaggio's application of the chiaroscuro technique shows through on the faces and armour notwithstanding the lack of a visible shaft of light. The figure on the extreme right is a self portrait. Boy Bitten by a Lizard.

I remember when we had a Caravaggio show at the Met,God it must have been over 30 years ago, I remember it so well. The rooms were packed with gay guys drooling over the paintingsl

We may never know who killed him, but the signs in Malta are that Caravaggio was paranoid, on the run and in deep trouble 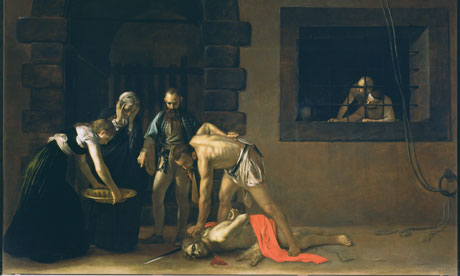 It seems like only yesterday that Michelangelo Merisi, better known as Caravaggio, was killed by poisonous paints. That was a theory floated in 2010. The latest idea, proposed by yet another "expert" and reported in some papers this week, is that he was assassinated by the Knights of Malta.

I was once lucky enough to be sent by the Guardian in search of all Caravaggio's works, and Malta was the spookiest stop on the trip, the place I felt closest to his dark heart. He went there when he was on the run after killing a man in a fight in Rome. He was ordained as a Knight of St John there, joining a holy chivalric order with roots in the Crusades. Today, the traces of the Knights are easy to find in Valletta, their fortified city perched on a high rock above a deep harbour. It is a strange, spectacular place. Down in the harbour you can see the prison that Caravaggio escaped from after getting into trouble with the Knights (trouble was his middle name). Away from the British-style pubs in the centre you'll find the eerie, eastern-style streets that lead to the old fortifications whose massive bulwarks have withstood sieges down the centuries. The most compelling place in Valletta is, however, its cathedral, where you can see Caravaggio's huge, dark painting of the Beheading of St John the Baptist.

In a prison yard, an executioner is using a knife to remove the partially severed head of a slaughtered captive. Other prisoners watch in fascination and horror from a window: tomorrow it might be them dying in the dust. The painting suggests direct observation, intimate knowledge of crime and punishment. It takes us straight into the twilit world of anger and vengeance in which Caravaggio lived his life.

Was he killed by the Knights he had (mysteriously) offended? It's just another futile speculation. It does not add much to our appreciation of him. But conspiracy theories will always circle round this painter because his art invites them. Dark paranoia pervades his unforgettable picture of the judicial murder of John the Baptist: you feel he is scared about something, haunted by something, by guilt, and yes, maybe anxious that his sojourn in Malta is turning very sour.

Caravaggio in Malta had a hellhound on his trail. But wherever he went it followed him. It was his own shadow.

I notice a striking resemblence here: 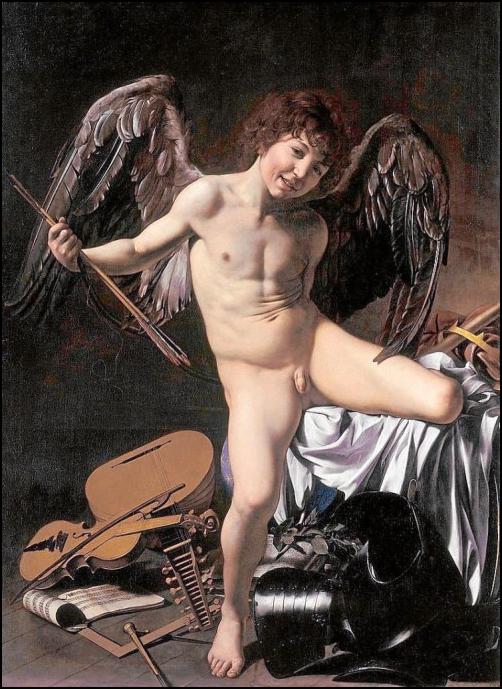