Pam Grier on 1970's blaxploitation movies and much else

Pam Grier on 1970's blaxploitation movies and much else

She was the queen of the 1970s blaxploitation movies. But being a black woman in Hollywood hasn't been Pam Grier's toughest fight. She talks to Shahesta Shaitly about rape, cancer and finding peace with her horses in the country 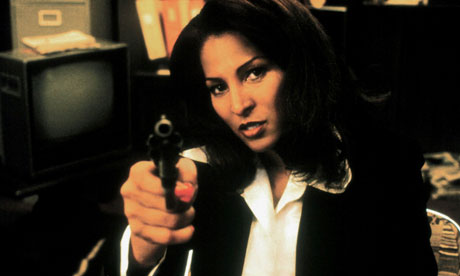 Pam Grier has spent the morning grooming and feeding her beloved horses, drinking green tea and working on her farm in Denver, Colorado. "I grew up in an urban environment and on military bases, but now my life is based on this ranch. My nickname is Mother Earth these days!" she says, talking at high speed in a lilting accent that combines California and the South.

It comes as a surprise to find that the 1970s "Queen of Blaxploitation" – she starred in more than 20 films between 1971 and 1981 – now drives a John Deere tractor and spends her time rescuing and rehabilitating horses for a therapeutic riding programme. "I'm rural now, and love it," she says with a chuckle.

When Quentin Tarantino cast Grier in the title role of 1997's Jackie Brown, many critics said he'd single-handedly resurrected her career. Grier had spent the best part of the 70s trailblazing her way through Hollywood, only for the genre in which she'd majored to fall out of fashion in the 80s, the same decade she faced serious illness. By the 90s, she was doing theatre here and there, but mostly she spent time on her ranch in Franktown, "healing".

Jackie Brown, Tarantino's adaptation of Elmore Leonard's novel Rum Punch, took him five years to write, and he scripted Grier's part with her in mind, not having noticed that in the book the character is white. In an interview with the Guardian at the time, he said of casting Grier that "to one degree or another, it was like casting John Wayne in a film… Pam is an icon and it became a Pam Grier movie."

Grier's thoughts and sentences spill out, galloping over one another. She trips from one subject to the next in long, eloquent monologues that encompass the state of the world, women's rights, being diagnosed with and recovering from cancer and the delight of late-night champagne and popcorn. You find yourself holding your breath while she chats, answering her own questions. It's as if she's in a rush to say everything she's ever wanted to say, before the magical gates close and we're locked out of her fabulous world.

Her path to prominence began when she moved to Los Angeles in 1967 from her native North Carolina at the age of 18. She set her sights on the UCLA film school, doing five different jobs, one of them as a receptionist at film company American International Pictures. The five-job shuffle was short-lived: she was discovered by Jack Hill, an AIP director who cast her in his "women in prison" B-movies The Big Dolls House (1971) and The Big Bird Cage (1972). In a rare interview in 2004, Hill said he chose Grier because she "had what I was looking for: authority and presence. She just had a natural ability to carry off a role. She stands out. I saw enough in her that I figured I'd take a chance. It paid off." Within two years, she was dubbed the "Queen of the Blaxploitation Genre" at a time when film roles for African-American women were, says Grier, "practically invisible, or painfully stereotypical".

By 1973, Grier's combination of sass, assertive style and martial-arts skills had her taking lead roles in action films traditionally led by men. "People had only seen African-American women depicted a certain way in film and it was about time that changed," she says. Grier became the first female action lead in Hill's 1973 hit Coffy (tagline: "The baddest one-chick hit-squad that ever hit town!"), as a nurse out for revenge on drug dealers. She became a pop icon and a year later played the title character in Foxy Brown. She was the kind of star the film industry hadn't seen before: ballsy, sexy and black.

When I ask her how difficult it was to be a black actress in Hollywood at the time, I'm met with a sigh: "You know, I had to bump heads with a lot of men in the industry. They were not comfortable with showing a progressive black female in an action role. As a strong woman, I was seen as a threat. There was a fear that women would mimic me in real life. I remember certain people saying: 'Oh, she's taking our jobs, she's castrating men' – as far as I was concerned, I thought: 'We don't need to walk behind you, we should walk beside you.'"

Grier was born in 1949 in North Carolina to a Cheyenne mother and a mixed-race father. Her mother worked as a nurse and raised Grier and her two siblings while her father was a mechanic in the air force. Her early childhood was "idyllic and fun". The family moved around a lot depending on where her father was stationed, but they eventually settled in Denver. In her autobiography, Foxy: My Life in Three Acts, she describes how her life changed for ever at the age of six, when she was raped by two boys while they were left unsupervised at her aunt's house. She became "lonely and traumatised", formed a stammer and became introverted. "It took so long to deal with the pain of that," she says in her book. "You try to deal with it, but you never really get over it… My family endured so much guilt and anger."

Another experience that "shaped her" was her diagnosis of stage-four cancer in 1988. Grier was in her late 30s, "a health-nut, running six miles a day, not eating meat and not abusing my body in any way". She'd gone for a routine cervical smear and got a call from her doctor's surgery who said they'd found abnormal cells in her test results. She was booked in for an operation to remove the abnormal tissue and told she'd be fine. Afterwards, her pathologist called to say it wasn't good news; the next day, her doctor sat her down to tell her she had 18 months to live. "They couldn't operate or start treatment for another six weeks, as I'd already had surgery and my body had gone through so much trauma. I was told to start preparing for treatment and to organise my will. I coped from minute to minute. I went home to ponder this 2in-thick folder [of information] they give you."

She describes the cancer and its treatment as a "full-time job" and says, to her surprise, that it was a lonely one. To begin with her mother tried to be with her for as much of the treatment as possible, but had to go back to Colorado to work. Her boyfriend at the time didn't turn up for her first session of chemotherapy, but promised to come to the second. "He didn't come. He just abandoned me and I didn't see him for another five years," she says, without a hint of self-pity.

"In 1988 the C-word meant: 'Oh my God, you're going to die. There is no hope.' You learn who your friends are when you have cancer." The friends who did come forward, she says, weren't the ones she was expecting. "Those that came to my bedside were Steven Seagal, Carl Gottlieb, my mentor, and the president of the Writers Guild and film director Tamar Hoff. They were truly amazing. But a lot of people couldn't cope and just fell away."

Grier counts herself "lucky" and says that what she learned is that "cancer isn't choosy. People in the cancer ward come from every ethnicity, every socio-economic background – it doesn't matter – cancer is the common denominator." She credits a combination of eastern and western medicine for her recovery. Her doctor sent her to a Chinese herbalist after her diagnosis, where she was prescribed "herbs and tinctures. It also taught me to drink hot tea with my food to get rid of toxins." This regimen, combined with yoga and chemotherapy, is what she believes "saved" her. Although she has been in remission for "years and years now", Grier believes that getting better and staying better is a "life-long" process. She's an avid believer in the green movement and says her recovery is "based on the environment – fresh well-water from the ground, fresh air, trees and plants, and wild animals."

Her life since her recovery has been remarkable. Throughout the early 90s, she turned down a lot of "cutesy" film parts, preferring to take smallish roles in the theatre. She starred in Sam Shepard's Fool for Love at the Los Angeles Theatre Center, which had a nine-month sell-out run, and then in Terence McNally's Frankie and Johnny – where she got to go "nude on stage. I loved it!"

Then, in 2005, Tarantino offered her Jackie Brown, a homage to her earlier 70s action roles. "I had no interest in film until Quentin asked me," she says. How did it feel to be making a comeback? Grier sounds exasperated: "I never left! I just hadn't been offered roles of that calibre forever. Spike Lee wasn't writing roles for me, John Singleton and other black directors weren't writing roles with me in mind – I was just doing other things until Quentin asked me." Made on a relatively small budget of $12m, Jackie Brown was a hit, grossing nearly $73m at the box office in 2007, getting Grier back on to the Hollywood radar and earning her a much-deserved Golden Globe nomination. "What I know is that all my work before Jackie Brown prepared me for that part," she says.

She's been busy since. A regular slot on Law & Order: Special Victims Unit, was followed by a five-year stint on the The L Word, where she played straight alcoholic bar owner Kit Porter. She's just finished filming The Man with the Iron Fists, a martial arts film that co-stars Russell Crowe and Lucy Liu. It's directed by Wu Tang Clan member RZA and is due for release in late 2012. And when she's not working her butt off in Hollywood, she's on her Colorado ranch.

You get the feeling that Pam Grier is squeezing every single moment she can out of life. As our conversation comes to a close, I ask her how she's managed to stay so full of vim after everything she has been through. "I'm a woman who had options that my mother and grandmother and great-grandmother did not have – and for that I'm truly blessed and grateful. When you have common sense and gratitude, you appreciate the life you have." And what an amazing life it has been.