Claudia Cardinale: Fellini, Herzog and me

The luminous star of 8½ and The Leopard, Claudia Cardinale lit up the screen in the 1960s. She talks to Steve Rose about life as a muse, her 'man's voice' – and never going naked 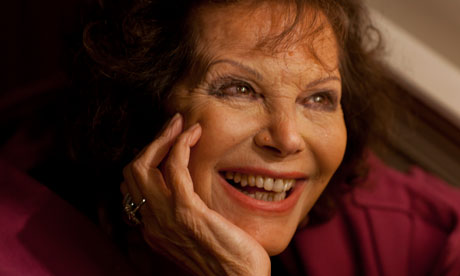 'Cinema is a dream' ... Claudia Cardinale. Photograph: Sean Smith for the Guardian

Being in London is making Claudia Cardinale nostalgic. The Italian actor remembers shooting one of her first films here, in 1959: Upstairs and Downstairs, a forgotten domestic comedy. She met the Queen at the premiere of West Side Story in Leicester Square in 1962, and looked the more regal of the two. She came here to see one of Marlene Dietrich's last concerts, in 1973, with her friend and regular director Luchino Visconti. "In his room he kept a signed photo of Marlene Dietrich, in her costume. Fantastic!"

This time, she's here for the London Turkish film festival, which opened last month with a new film starring herself; but on a quiet afternoon in a Mayfair hotel, the conversation inevitably turns to the past. After 120 movies, her memory zigzags further back, across more continents and through more movie stars of yesteryear than just about anyone else's. It's a route paved with the attentions of a generation of (mostly male) admirers and lit by the flashbulbs of the world's media. When Federico Fellini coined the term "paparazzo" in La Dolce Vita, it was precisely celebrities such as Cardinale he was thinking of, hence her role – as a movie star – in Fellini's followup, 8½. She came into her own just as postwar Europe was shaking off realism and rationing, and embracing glamour and sensuality; like her French counterpart, Brigitte Bardot, Cardinale came to embody those values. "For me, cinema is a dream," she says. "The most beautiful thing. I don't like to see banality in films. I want to see something that makes you think and dream."

At 73, Cardinale still exudes glamour, even if some of her anecdotes are now as hard and polished as the pink beads around her wrists and neck. She dishes these out with charm and vigour – so much vigour that at one point a bracelet flies off her wrist and across the room, to her great amusement. "With Visconti, it was like theatre," she says, "with Fellini, the opposite: no script!" – summarising that extraordinary moment in 1963 when she was flitting between the set of 8½ in Rome and Visconti's The Leopard in Sicily. "With Visconti, you couldn't speak on the set. With Federico, everybody was shouting, on the telephone, like a circus. Only like this could he be creative. If there was silence, he couldn't create."

Those two masterpieces alone would have been enough to secure Cardinale's place in movie history. Though both films say something about modern Italy, they could barely be more different. The former is radical, chaotically snappy, shot in chic black and white; The Leopard is a stately, sumptuous recreation of declining 19th-century aristocracy. In 8½, Cardinale plays a version of herself – the luminous movie star who symbolically unlocks the frustrations of Marcello Mastroianni's put-upon director. "Fellini told me I was his muse, that I gave him inspiration," she says. "What I say in the movie, it's all improvisation. And it was Federico who was talking to me in those scenes. Marcello was sitting next to him, repeating what he said."

In The Leopard, by contrast, she is the radiant mayor's daughter, who beguiles both Alain Delon and his uncle, Burt Lancaster. "I was speaking English with Lancaster, French with Alain Delon and Italian with the others." She and Visconti became close friends. She had already starred in his Rocco and His Brothers, and went on to feature in two more Visconti films. "He didn't like women, I don't know why, but with me it was a fantastic relationship. He had culture. He was fantastic about painting, art, music – he could speak about anything." She laughs her husky, throaty laugh – even huskier now for being a lifelong smoker. "Before Fellini, I was always dubbed because I have this voice," she says. "They put other voices on me, high little ones. Even now when people call me at home they think I'm a man."

Early success – and a secret son

After 8½ and The Leopard, there was Sergio Leone's Once Upon a Time in the West, and Werner Herzog's Amazonian epic Fitzcarraldo, whose fraught production, beset by death threats and cast meltdowns, is the stuff of legend. "It was the most incredible adventure of my life!" Cardinale's eyes light up behind her tinted spectacles. "Just a small group of us, with all the animals in the forest. Can you imagine?" Wasn't it dangerous? "No! I like danger!" Herzog? "A marvellous man, very intelligent and fantastic." Kinski? "Oh my God! But he was afraid of me!" Surely the notoriously priapic actor must have tried it on? She laughs, then says, gnomically, "For me, work is something, life is another thing."

Over the years, Cardinale has been romantically linked to everyone from Jean-Paul Belmondo to Warren Beatty to Jacques Chirac. "I had lots of friends. Steve McQueen I would see in Rome because he was always coming to Ferrari to test their new cars. Rock Hudson was one of my best friends [she starred in two movies opposite him]. Paul Newman gave me his house in LA to live in when I was there."

The fairytale of how Cardinale got into the movies has crystallised into myth. Born and raised in Tunisia (her family moved there from Sicily), she won a beauty competition as a teenager she hadn't even entered and, as a prize, was whisked off to the 1958 Venice film festival. There, the legend goes, she was immediately courted by Italy's top producers, but turned them all down and went home. The producers persisted, sending telegrams to her father, she says. "It's the same thing when a man is looking at you and you don't look at him, he's always insisting. If you say yes immediately, he's not interested. So the more I said no, the more they insisted."

As Cardinale's language suggests, the Italian film industry at the time was overwhelmingly male; a woman's place was invariably as an object of desire, on screen and off. Cardinale came under the wing of Franco Cristaldi, one of Italy's most successful producers, who first put her on contract, then married her (they separated in the mid-1970s). The relationship doubtless gave her opportunities, but there were conditions, too. "It was very strict," she says. "I couldn't go around on my own. And I was paid very little, by month, not by film." Cristaldi did not allow her to cut her hair or gain weight. Worst of all, she had to conceal the fact that she had a young son, born when she was 17. Until the late 1960s, it was reported that he was her little brother. Cardinale never revealed who the father was. Decades later, she told the French press she had been raped. Understandably, she is not comfortable revisiting this, but says she does not feel she has been exploited by the industry. "No, no, I always refused to be treated like this," she says. "I never accepted to be naked in my films, for example."

You could forgive Cardinale for now languishing in Sunset Boulevard-style retirement, trading off her memories, collecting yet more lifetime achievement awards, and complaining how it's the pictures that got small. In fact, she's done the opposite. She's never stopped working. In recent years she has worked in Tunisian, Spanish, French, Italian, American, Portuguese and Turkish movies. The latter of which, a cross-cultural comedy called Signora Enrica, explains her presence at London's Turkish film festival. Cardinale plays a man-hating Italian landlady who teaches a callow young Turkish student about life and language. ("I was a bombshell. My breasts were better than Claudia Cardinale's," her character says, establishing a nice line between self-reference and self-deprecation.) This week, she is in Venice shooting her next film, Effie, a British study of John Ruskin and his young wife, written by and starring Emma Thompson. "I like to be active," she says. "And not only cinema, fighting for women's groups. I've been a Unesco ambassador for a long time, defending diversity, promoting Aids awareness." And she still sees those old friends who survive, she says, such as Alain Delon, with whom she watched Martin Scorsese's restoration of The Leopard in Cannes last year. "Alain was crying all the time, saying, 'We are the only ones left alive. Everyone else is dead.'"

Perhaps Cardinale's tendency towards polished soundbites ("fantastic!") is a defence against such nostalgia, as is her on-going momentum. "When I was young, I wanted to go everywhere and be everyone, and with this work, I have," she says. "The interesting thing for an actress is not to do what she wants to do, but to be somebody else. I was blonde, I was brunette, I was a princess, I was a whore. I was everything. You are not yourself in front of the camera. You can live many lives, instead of one. I think I've been lucky."

I am head over heels in love with the younger Ms Cardinale. She definitely looks her most hot in Once Upon A Time In the West.

Dylan chose her pic for the inside sleeve of Blonde on Blonde. Sadly he forgot to ask and she threatened to sue. Maybe it was because it wasn't that nice a pic?

Didn't people used to think that was Dylan dressed up in drag? Sure, it's not her finest pic, but I'm not sure how they go to that.

Lee Van Queef wrote:Didn't people used to think that was Dylan dressed up in drag? Sure, it's not her finest pic, but I'm not sure how they go to that.

She looks more like Donovan in drag to me