Does anybody here create a nativity scene for Christmas. I haven't since I was a child. It was great. We put it with sawdust and moss and the stable, the houses and all the figures. But we never had a caganer... I always wanted one.

These figures are caganeros - From cagar (to shit) - from the Latin: cacāre.

A Caganer is a figurine appearing in nativity scenes in oringinally Catalonia and also extended to the rest of Spain. The figure is depicted in the act of defecation.

I watched the Barry Levinson film "Diner" again a few evenings ago. Unfortunately I can't find on youtube the scene where a drunken Kevin Bacon, in his underwear, trashes the local church's Nativity tableau. A youtuber says: "too graphic﻿ .... totally ruined the song"
I don't think it ruins it. It is the contrast- war (although over) and happy Christmas- what makes it a great song, no?

Ambiguous about it. I'm no longer a conventional Christian believer, but I accept the power of the mythology. John makes his point, though. So good luck to him.

This photo is much to the point: Man gets finger bitten off at school nativity
By Adam Parris-Long | Yahoo! News. 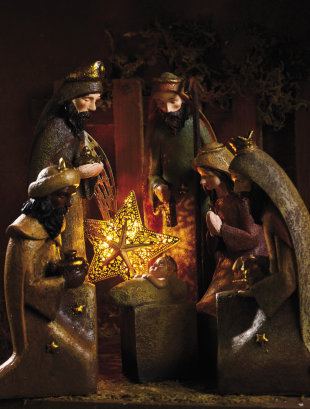 A father had his finger bitten off by another parent as a brawl erupted at a school nativity in South Shields, Tyne and Wear.

The fight occurred at Harton Primary School, as one man bit another’s finger off and “spat it out like an animal”- according to a witness. The brawl began in a room prior to the nativity starting with shocked parents looking on.

The 32-year-old victim has been discharged from hospital after being treated for his injury while a 39-year-old man was arrested on suspicion of assault and later bailed by police.

“Two men started to fight in front of all the mums and dads,” a parent told ‘South Shields Gazette’. “One bit the finger off the other and spat the blood out like an animal.”

“I heard a bit of commotion from the back of the room and looked around to see what was going on,” another said. “A man in a white hat stormed in and went for another dad. They were fighting and blood was flying. It was broken up by teachers quite quickly and the man in the hat disappeared.”

It is thought that no children witnessed the incident as they were preparing for the nativity. A spokesman for the school said the children were not “at risk at any time” and they are assisting police with inquiries into the attack.

“On Tuesday at about 1.50pm an incident occurred at Harton Primary School,” a police spokesman said. “There was a disturbance between two male parents, and one sustained an injury to his hand which required medical treatment. The other man was arrested by police for assault and released on bail.”


you do a lot of this then? this praising?


you do a lot of this then? this praising?

Ha ha. Thanks for the reminder, Vera.

It will be noted by all but the more obscurantist that your clip (and, in fact the entire Life of Brian movie) makes a perfectly clear distinction between the nativities of Brian and Jesus. No blasphemy here. None at all.

And your very first post in this thread parallels the earthy humour of "The Second Shepherd's Play" in the medieval English miracle cycles.

Furthermore, the Christian message of the Mr Bean nativity sequence ought to be obvious to all but the most bigoted polemicist.

A caganer is usually placed in big nativity scenes... not in the same stable as Jesus... but they're funny, the detail that among the three wise men, shepherds, baby Jesus and Virgin Mary, someone feels the call of nature.

I just remembered when I was a child I was watching a nativity scene in a school that wasn't mine... and I wanted those figures... my memory is not clear about whether I stole a few or not for my nativity scene at home. Anyway, that's the Christmas spirit...

Have a happy Christmas time, Eddie

I assume you were born in a hospital... but who knows?

Perivale maternity hospital, West London, in fact- although I don't remember much about it.

Except that I apparently arrived in this world courtesy of the UK's National Health (NHS) service.

Edit: oops I don't know if this can sound disrespectful... it is not my intention

Yesterday I was trying to be nice but I don't know if in my clumsiness my posts upset you somehow, Eddie... if so, sorry

Vera Cruz wrote:Yesterday I was trying to be nice but I don't know if in my clumsiness my posts upset you somehow, Eddie... if so, sorry

Jonathan Jones continues his seasonal series of best-loved wintry artworks with a 15th-century reimagining of the birth of Jesus, set against a tranquil Tuscan tableaux 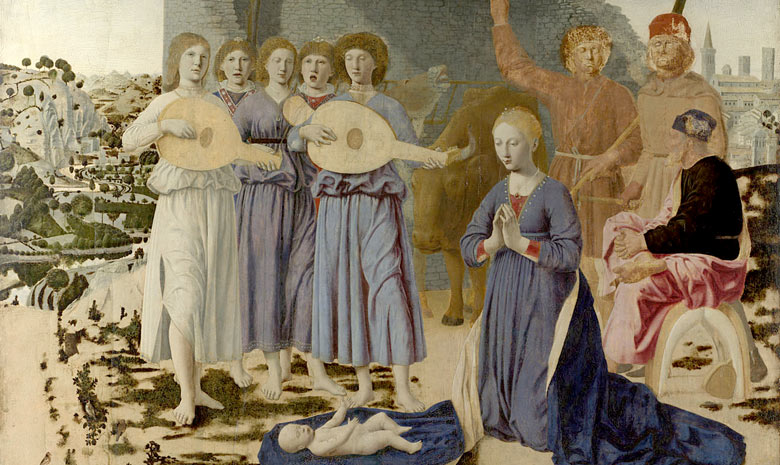 This is one of the most beautiful nativity scenes ever painted. Even though it was left unfinished, it has an invincible calm authority. Piero has set the Christmas story in the Tuscany of his own time – this was painted in the 1470s – with a town that resembles his own, Borgo San Sepolcro, and rocks and water that evoke the landscapes of the river Arno. Most moving is the stable, a rough creation of grey stone, a decayed ruin on the outskirts of town. But when you look at the choir of angels, realism ends. Their limbs are rounded like the geometrical shapes Piero studied as a noted mathematician. The harmonies of their forms make you hear the perfect note they sound. Everything from the crystal sky to the prayer of the virgin adds to the sense of revelation

Night of revelation: The Nativity at Night by Geertgen tot Sint Jans

Continuing with his series of favourite wintry artworks, Jonathan Jones feels a warm glow looking at the tender beauty of Geertgen tot Sint Jans's The Nativity at Night (c1490) 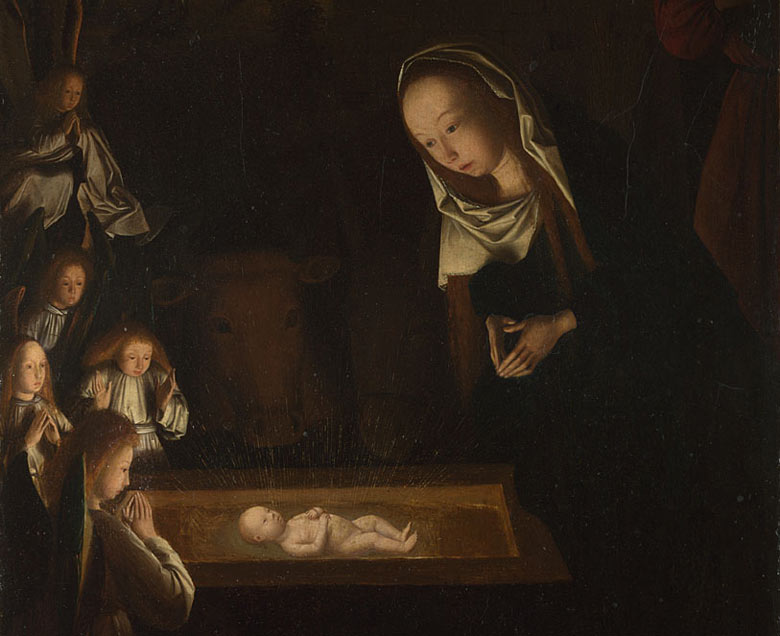 The tender beauty of this little painting pulls at your heart when you come across it in London’s National Gallery. The artist’s name means 'little Gerard of Saint John', and he worked in Haarlem in the Netherlands. His art seems frozen in religious contemplation. This is a believer’s Nativity. It is a mystic attempt to imagine that holy night. The darkness is illuminated by the child in the manger: the golden glow around the infant Christ lights up adoring angels and the pearl-smooth oval of Mary’s reverent face. Joseph is in the shadows. And all around the stable hangs the deepest dark of a night of revelation

In the runup to Christmas, art critic Jonathan Jones is selecting his favourite wintry works. Today it's this huge heartwarming canvas, as bright and bold as street theatre 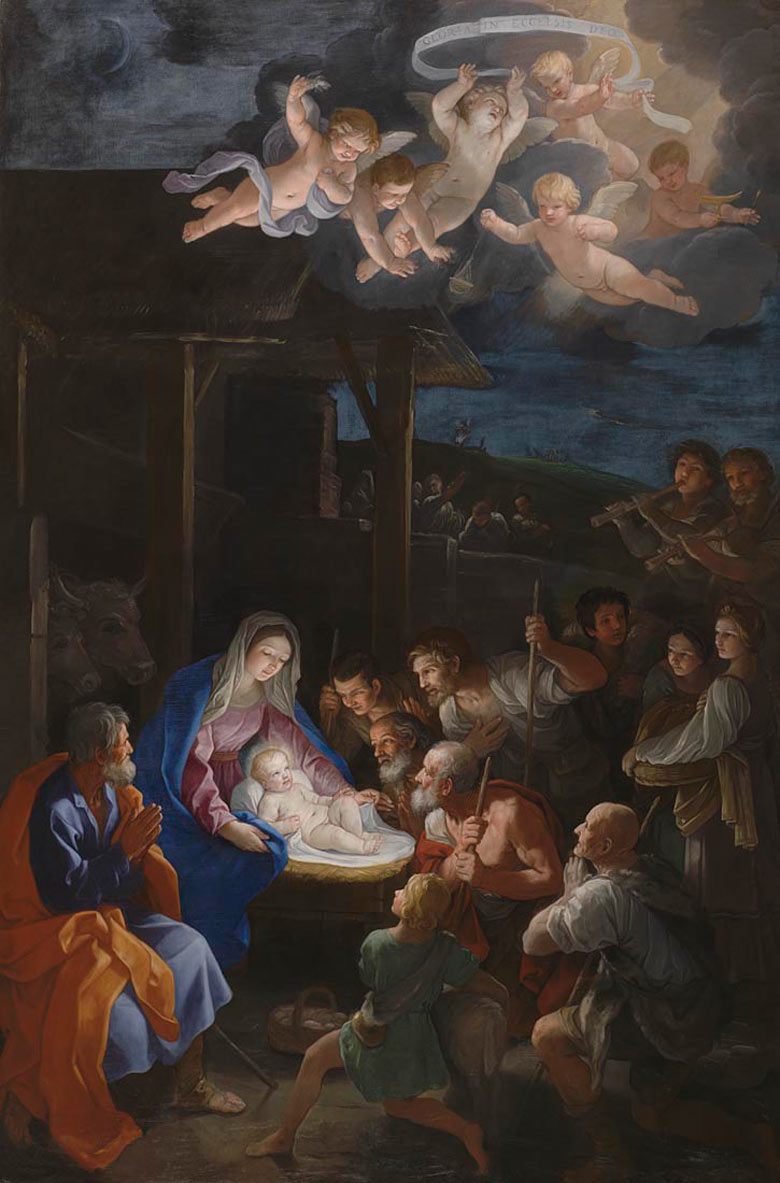 This huge painting tugs shamelessly at heartstrings, yet also seems deeply felt and honest. Guido Reni painted an equally imposing version of the same story for the Certosa di S Martino in Naples, and it makes sense to think of this picture too – which is in the National Gallery – as a great uninhibited piece of popular Christianity, merging with the Baroque pinnacles of Naples that look like marble Christmas trees, and the carved crib-scenes sold there. As bright and bold as street theatre, this is a painting of the people, for the people 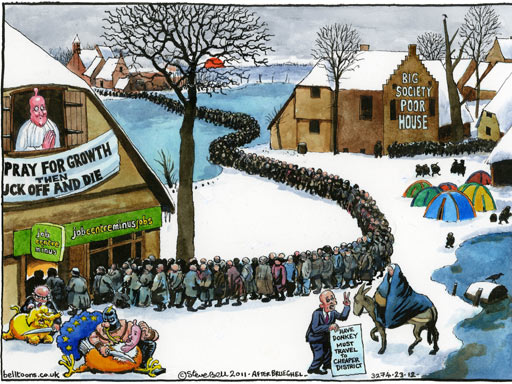